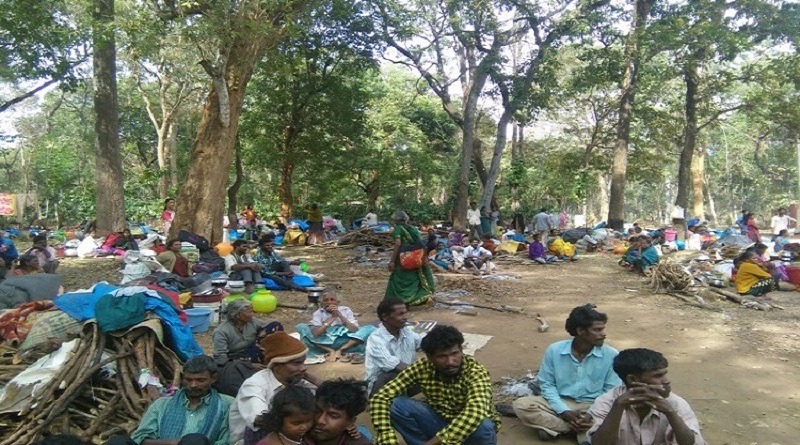 At 4.30 am on December 7 around 3,000 Adivasis in Biddalli and Tattalli villages in Virajpet taluk woke up to the sound of JCBs.

In a matter of few hours, their hutments were razed to the ground.

“The forest department and the local police did not give us any notice. If we had not come outside immediately and rushed our children out of our homes, they would have not been here with us,” said Manu J A, a 29-year-old Adivasi, whose house was razed.

As many as 578 families of Adivasis belonging to the Jenukuruba, Bettakuruba, Sholia, Yerava and Paniya tribes were living in hutments in a 2.5-acre plot near the coffee estates in these villages since June 2016.

“There were two JCBs and around 300 security personnel when the demolition drive began. We begged them to wait for us to take our kids and women and move out. They were really brutal to us,” said Appaji, one of the tribal leaders.

Some of the Adivasis said that the forest officials had initially supported them and had allowed them to stay there.

“It all started when we decided not to live in the coffee estates with the owners. They just gave us food and a hutment to stay. We were not paid salaries. We all wanted to live freely and earn money so we moved out of the estates and the forest officials had also allowed us to stay there,” said Appaji.

The Adivasis alleged that since they stopped working in the coffee estates, the owners colluded with the police and razed their homes.

“When their homes were brought down, eight people including four women were arrested by the police. The police were beating us and some women disrobed so that they would not be touched. Yet the police beat even the women mercilessly. They held the eight persons in the station for two days and were later released on bail,” said Nirvanappa, State Secretary of the Karnataka Farmer’s Association, who is helping the community members.

The members of these tribe have now huddled in a ground outside CB Halli Ashrama School and have been protesting against the injustice.

“According to the Scheduled Tribes and Other Traditional Forest Dwellers Act, or the Forest Rights Act (FRA). The legislation, enacted in December 2006, came into force on January 1, 2008, the Adivasis have to be given 2.5 acres of land per adult by the government for their livelihoods. They have not been given even an inch of land till now. They are struggling for food and water and we and yet they are protesting,” said Padma SJ, a committee member of the Bhumi Mattu Vaasthi Vanchitara Samiti.

Padma said that the officials claimed that the Adivasis were from Assam and Pakistan and not members of the tribal community and hence they were razing their homes.

Despite repeated attempts to call the police, they were not available for a comment.