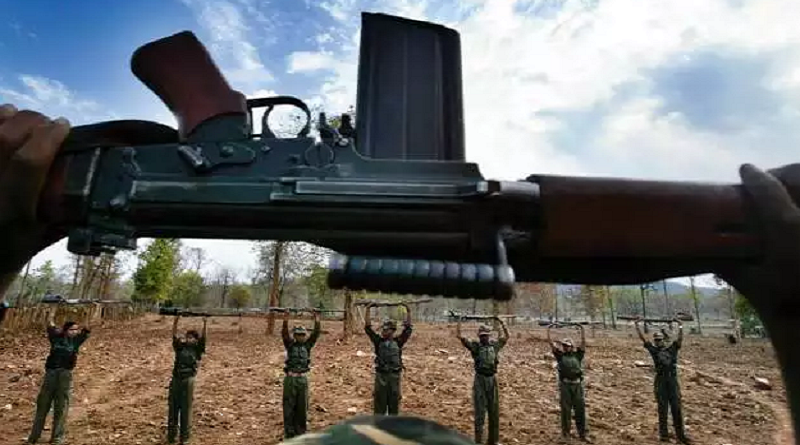 A close-knit constellation of Maoists, resisting an imperialist state, will make the New Democratic Revolution a reality. Naxalbari guides them like a lodestar.

“In India, the Naxalbari Peasant Revolutionary Armed Uprising, which will complete its 50th anniversary, was influenced and inspired by the Great Proletariat Cultural Revolution of China. Naxalbari was a pathbreaking event under the leadership of Com. Charu Majumdar—one of the two great leaders, teachers and founders of the CPI (Maoist) along with Kanhai Chatterjee—which marked a new beginning in the history of the country’s democratic revolution.” So said the central committee of CPI (Maoist) while calling to celebrate the four great events in history that strove to achieve world socialism, including Naxalbari.

It’s obvious that Maoists—more so in the CPI (Maoist)—are the real inheritors of Naxalbari Movement, besides certain revolutionary groups and individuals. Unless a Bolshevik party is built with Bolshevik spirit to achieve an Indian revolution by uniting all revolutionary forces, a new democratic revolution—a precursor to socialism—cannot be achieved.

Naxalbari stands as a dividing line in all aspects of semi-feudal, semi-colonial Indian polity, society and culture: between the exploiting and the exploited classes, the rulers and the ruled, the comprador bourgeoisie and the broad masses of peasantry and working classes, parliamentary politics and the alternative people’s path. In one word, class struggle under the leadership of the working class to seize state power, and to control the productive forces to change the relations of production.

The Naxalbari movement had for the first time defined the character of the state as semi-feudal and semi-colonial, a comprador bourgeoisie dictatorship. It had taken Maoism and Mar­­­­xism-Leninism as its world outlook. It had rejected parliamentary politics. It had chosen the path of the New Democratic Revolution and waged a protracted war against the state, with armed struggle as a main form of action. Its economic programme of land struggle was started in Naxalbari on May 23, 1967, when the Santhals of Naxalbari and Kheribari villages occupied land and declared their right over it till May 25, before laying down their lives to protect it against the state’s forces.

The movement’s military programme primarily followed guerrilla tactics till it liberated villages and ultimately engaged the state’s forces in a face-to-face conflict at the ‘centre’. Today, that movement has reached the mobile warfare stage in Dandakaranya, Bastar in Chhattisgarh and Gadchiroli in Maharashtra.

Its political objective is to give “all power to the people”, like that of the Soviets in USSR and the communes in China. This political programme was in effect in its embryonic form in Naxalbari, Srikakulam, Wayanad and other adivasi peasant struggle areas, and even during the Telangana peasant armed struggle (1946-51).

The Maoist programme has taken a clear form in adopting the resolution to form Grama Rajya Committees during the Special Plenum of CPI-ML (People’s War) in 1995. Though it was crushed in hundreds of villages in North Tela­n­gana during 1995-2003, with encounter killings and such other extra-constitutional forms of bloodshed, it could sustain itself in Dan­dakaranya. For the last 12 years, it has established a Janatana Sarkar—a self-reliant, self-sufficient, united front rule under the landless, the small peasantry, the middle peasantry and the rich peasantry. Adivasi, Dalit and oppressed classes are ruling themselves under the leadership of the party, with People’s Liberation Guerrilla Army protecting this alternative people’s power. That is why we see today the reactionary war on people, particularly in eastern and central India, in the adivasi areas of Jangalmahal in Bengal, Saranda in Jharkhand, Dandakaranya on the Andhra-Orissa Border and in the Western Ghats.

The Naxalbari spirit of upsurge was continued by the CPI (ML) of Andhra Pradesh, taking from the experience of the Telangana peasant armed struggle in implementing mass projects and forming mass organisations, particularly after the setback of the Srikakulam movement. After the martyrdom of Charu Maj­umdar in 1972, a self-critical report was written and efforts were made to form a central organising committee, which resulted, during the Emergency, in the laying down of a roadmap to revolution in the meeting of Telangana Regional Committee in 1976. As an inheritance of the Telangana armed struggle, ‘Vir­asam’—the Revolutionary Wri­ters’ Association, was formed in 1970. The Jana Natya Mandali, an upsurge in the people’s cultural movement, had come in 1972; Pilupu—a mag­­azine for the oppressed was started in 1973. By 1974, Radical Stu­dents Union—RSU—was also formed.

During the Emergency, radical students had to go underground and conducted studies on land relations in villages—comparable to the Hunan Studies under Mao Tse Tung—resulting in a mass upsurge for occupation of land by the landless and poor agricultural labourers, particularly Dalits and other oppressed classes. The second conference of RSU in Warangal had given a call to students and youth to “go to villages” to propagate the politics of the New Democratic Revolution and to help landless people occupy land and start a wage struggle to protect it.

A meeting in Jagityal in September 1978, later known as ‘Jag­ityal Jaitra Yatra’, led to land being occupied in 150 villages and the right of the people over it being declared. From then onw­ards, it has been a continuous history of class struggle with mass line. The CPI-ML (People’s War) was formed in 1980 and, with the Dandakaranya Perspective being adopted, had sent squads into Sironcha of Maharashtra and Bastar of Madhya Pradesh. The Perspective envisaged that unlike a liberated base area, such  as in Yunan of China, the Indian revolution may need more base areas to usher in the New Dem­­ocratic Revolution.

In 1999, CPI(ML), which was active in Bengal, Bihar, Delhi and Punjab, merged with the People’s War, taking the name of CPI -ML (Peoples War). On September 21, 2004, CPI-ML (Peoples War) and Maoist Communist Centre—with its long history of class struggle in Bihar and Bengal—under the leadership of Dakshinadesh united as CPI (Maoist).

In spite of ups and downs, advances and setbacks, once a mass line was adopted in 1976, there has been a consistent journey. Today we see the movement in more than one state. Even the Centre says CPI (Maoist) has a presence in 16 states. In many areas, particularly in DK (Dandakaranya), AOB (Andhra Orissa Border), Jharkhand and Bihar and in the Western Ghats, there are armed struggles by mass organisations. Like the Bhoomkal Militia in DK—a people’s guerrilla army safeguarding people’s power.

Though it looks like a struggle for land, whether in Naxalbari, Srikakulam or Telangana in 1970s, this is a genuine anti-feudal, anti-imperialist struggle with the slogan of ‘land to the tiller’, but aiming at seizure of state power. That is why the comprador rulers at the Centre and states look at it with fear and brand it as the “greatest internal threat”.

The imperialist globalisation policy adopted by the Indian government in 1991 proved right the vision of Naxalbari in characterising the state as a collusion of comprador, feudal, imperialist forces.

The Naxalbari path, being implemented in Dandakaranya, Bihar and Jharkhand, AOB, Western Ghats and Jangalmahal, is adopting an alternative people’s development programme to protect the natural wealth and human labour, which are sought to be plundered by multinationals and big firms.

Every political party in power in India’s parliamentary politics whole-heartedly adopts globalisation. Hence, patriots, democrats, environmentalists and all those who genuinely feel for the sovereignty of people have to stand in solidarity with the str­uggles of the masses—particularly adivasis, Dalits, peasants, wor­­kers, women, Muslims, students and unemployed youth—in different unorganised sectors under the leadership of CPI (Maoist) and other revolutionary forces in their goal for an alt­ernative politics. This self-reliant path, culminating in self-rule, will usher the New Democratic Revolution. It has been the dream of thousands of martyrs who have laid down their lives in fighting against this exploitative system and the state.

One need not go into the details of the degeneration of parliamentary politics, particularly in the light of 72 votes to Irom Sharmila in Manipur, juxtaposed with the UP elections results, where the BJP got absolute majority without giving a single seat to Muslims.

So, the only hope left for democratic forces in this country is the New Democratic Revolution, the unfulfilled democratic task given to us 50 years ago by the Naxalbari movement.