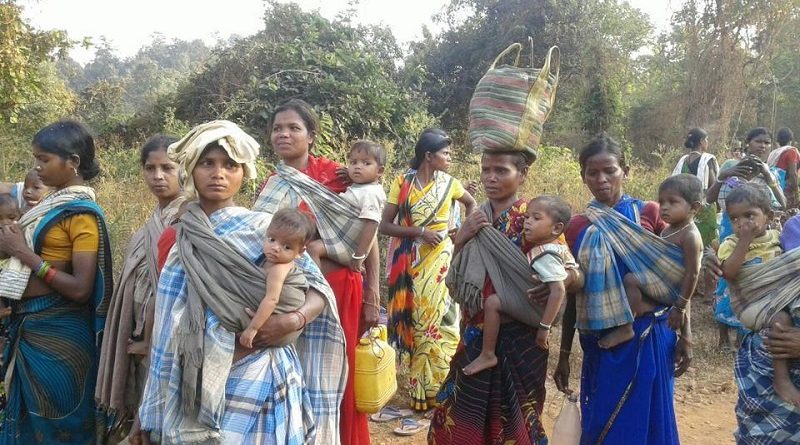 India People's War
February 17, 2017 C. Kistler Adivasi, Bastar, Fake encounter, Soni-Sori
Hundreds of tribals staged a protest in front of a police station in Chhattisgarh’s Dantewada district on Thursday protesting the death of two tribals, including a woman, who were killed in an alleged fake encounter after being branded as Maoists.

The tribals are protesting for the last 19 days with the bodies of the two villages in Gampur under Kirandul police station in the Bastar region of the state.

On January 28, police allegedly shot Bhima Kudati and Sukmati Hemla in the jungles of Hairauli Paurangal. Police said both were Maoists and that a rifle along with other weapons was recovered from the encounter site.

Villagers have accused the police of sexually assaulting Hemla before killing her and sought an independent inquiry as well as a second autopsy on her body. They also claimed that eyes of the two had been gouged out.

“More than 700 tribals of the village protested in front of the police station. The tribals are demanding that the post-mortem is done again because the eyes of the woman are missing. They are also demanding that a case is registered against the guilty personnel,” Soni Sori, tribal activist and Aam Aadmi Party leader who led the protest, said.

She said the family members of the dead tribals alleged that the police abducted them on January 27 when they were returning from the weekly Kirandul market and killed them saying they were Maoists.

Sori and five others activists who visited the village, about 30 km from Kirandul market in Dantewada, on February 12, also demanded an independent inquiry into the matter.

“It was a fake encounter and a high-level inquiry should be conducted. The villagers are protesting with the bodies but no one (from the government or administration) has visited the village. The bodies are still lying in the village and have not been buried,” said Sori.

Dantewada DIG P Sunderraj, however, rubbished the claims of sexual assault and torture.

“The allegations are completely baseless as security forces never do such things. I have got the information about the protest and we will inquire into the matter,” Sunderraj said.

the special director general of police (anti-Maoist operations), DM Awasthi, told Hindustan Times he has sought a detailed report of the case.

“No criminal activity of security forces will be tolerated in Bastar. I have asked DIG, Dantewada, to conduct an inquiry and submit a report immediately,” Awasthi said.