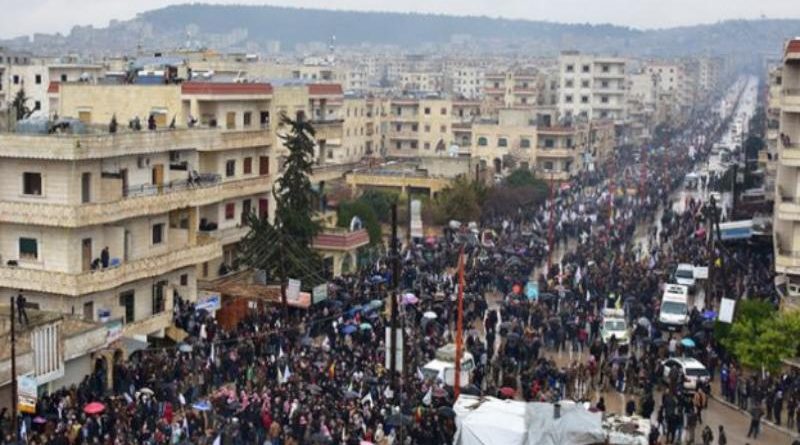 Issued by the Office of the Chairperson
International League of Peoples´ Struggle
January 24, 2018

We, the International League of Peoples’ Struggle (ILPS), condemn the aggression carried out by Turkey on the Kurdish canton of Afrin in Northern Syria using aerial bombardment, artillery fire and tanks in its continuing campaign to suppress the Kurdish people’s liberation movement. The Kurdish People’s Protection Units (YPG) have vowed to fight back to protect Afrin which is part of Rojava-Northern Syria, the Kurdish autonomous region administered by the Democratic Union Party (PYD).

The ILPS supports the Kurdish people’s struggle for national self-determination and their aspiration for a democratic self-administration in Rojava-Northern Syria. Even under the conditions of civil war, the people of Rojava successfully held a referendum in which they overwhelmingly expressed their desire to establish a Democratic Federalism of Northern Syria within a unified federal Syria with equal rights among the different ethnic groups in Rojava-Northern Syria: Kurds, Arabs, Syriacs, Assyrians, Armenians, Turkmen, Circassians, and Chechens.

The Syrian government has denounced Turkey’s attack on its territory calling it an act of aggression. Russia has called on both Turkey and Syria to calm down and settle problems through negotiations. Afrin is formally under the protection of Russian and Syrian forces.

According to the YPG, the attacks of the Turkish army on Afrin and surrounding areas have so far killed 18 and wounded 23 civilians among them women and children. The YPG counter-attacks have resulted in the killing of 40 Turkish soldiers and Free Syrian Army (FSA) rebels. Two tanks of the Turkish army have also been destroyed. The people of Afrin have vowed to make Afrin a “graveyard for the Turkish army and Erdogan.”

Turkey had originally gone along with the US in its campaign of “regime change” against Assad. For this anti-Assad campaign, the US mobilized Saudi Arabia, Qatar and Israel and various jihadi terror groups such as the Al-Qaeda affiliated Al Nusra Front, the so-called Free Syrian Army (FSA), armed and trained by Turkey, and the Islamic State financed and armed by Qatar and Saudi Arabia.

The entry of Russia into the war upon the call for assistance from the Syrian government turned the tide in favor of Assad with the Syrian Arab Army (SAA) recovering most of the territory initially lost to IS and other jihadi groups under the cover of Russian air power. Russia has emerged the most effective player in the war, enhancing its prestige and its influence in the region, especially in relation to the US.

With its newly acquired status, Russia successfully enticed Turkey to distance itself from the US with the promise of Turkey being assured of oil supply and having an important part in the Russian gas pipeline that would supply gas to Europe. Russian air power had previously destroyed the oilfields inn Mosul and elsewhere that had come under the control of IS that sold oil to Europe under Turkey’s protection. Another reason for Erdogan’s cozying up to Russia at the expense of the US is the US support to the YPG in the fight against the Islamic State.

Russia has embarked on a diplomatic offensive opening another negotiating track in Sochi–aside from the UN-sponsored Geneva track–which successfully brought together the Syrian Government and many of the Syrian opposition groups. This initiative has gotten the support of Iran and Turkey, effectively sidelining the US. Russia has pressed for the inclusion of the Kurds in the negotiating table putting Turkey in a bind.

The US was forced to support the YPG because the latter had proven to be a highly effective force against the IS and other jihadi groups that had turned into Frankensteins for the US and its regional lackeys, Saudi Arabia and Qatar. Having failed in the campaign to oust Assad, the US is now trying to salvage its position by doing everything to maintain a presence in Syria one being to keep its relations with the YPG and remnants of IS for future trouble-making.

The Kurdish liberation movement in Northern Syria has emerged more powerful militarily and politically in the course of the civil war. It has been able to set up a functioning political structure to run its autonomous democratic administration in Rojava-Northern Syria and an effective armed force in the YPG to defend its territory.

The PYD and YPG have played their cards well in the complex situation of the US-instigated Syrian civil war with various world and regional powers pursuing their own agenda. Their decades long struggle for national self-determination has taught the Kurdish people that they have to be strong and smart in order to achieve both their long-term and short-term objectives.

We reiterate our firm support for the Kurdish people’s right to national self-determination. We call on all progressive organizations throughout the world and all people of good will to condemn the reactionary and aggressive policies of the Erdogan regime and give their support to the Kurdish people’s just struggle for democracy and national self-determination.