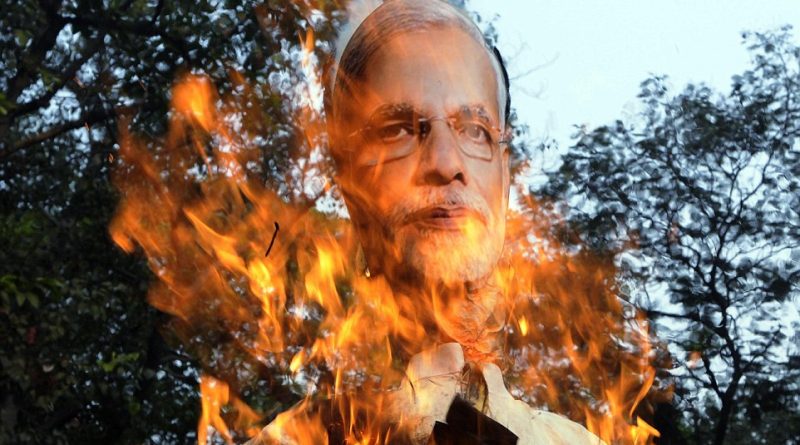 In a major shift in their outreach strategy, the Maoists in Chhattisgarh have decided to tap into burning national controversies such as Citizenship Amendment Act (CAA), National Register of Citizens (NRC) and National Population Register (NPR), and treatment of minorities in general, as a new offensive to fight against the State.

Earlier, their approach was designed to appeal to the local population of Bastar with issues that affect tribal lives – ‘Jal, Jungle, Zameen’ (water, forest, land). The issues chiefly centered around alleged atrocities by the local police, “unwelcome” development work, mining companies and road contractors among others.

In an official statement issued recently, the Left-Wing ultras have taken on the Hindutva agenda of the Indian Right and extended support to the minorities. This comes in the backdrop of sustained attack from the right-wing, who have been referring to intellectuals supporting the Left as ‘Urban Naxals’.

In a statement issued on 7 March, the banned CPI (Maoist) made scathing attack on the Bharatiya Janata Party and its ideological fountainhead Rashtriya Swayamsevak Sangh (RSS) for allegedly pursuing ‘Brahminical Hindutva’ ideology in India to oppress and gag the voice of Dalits, Adivasis, minorities, farmers, women and progressive groups. It also attacked policies by the Narendra Modi government at the Centre.

“By using CAA and NRC, the government has prepared a list of 19 lakh Indians and planning to declare them as non-citizens. A large number of poor people in Assam have been deported to detention centres as they failed to provide documents to prove their citizenship. By bringing in triple talaq bill, the Modi government pretended to be a benefactor for Muslim women, which is false,” Sainath, secretary of Darbha Divisional Committee of the CPI (Maoist), Dandakaranya, claimed in the statement.

Why are Maoists targeting national issues?

It is probably an attempt by the Ultra-Left group to broaden their social base — beyond the tribal lands — and get into urban territories, and gain sympathy and tacit support of those who are either critics of the current government or have apparently suffered in some way due to the Centre’s policies formulated under the Modi government.

As Mao Zedong, the founding father of the People’s Republic of China, said, while armed struggle and movement in rural areas would be the first priority, importance should be given to urban struggle. “The final objective of revolution is the capture of the cities, the enemy’s main bases and this objective cannot be achieved without adequate work in cities,” said Mao in Selected Works of Mao Zedong.

Maoist document — The Strategy and Tactics in Indian Revolution — states, “Apart from the working class and the urban poor, we also have to pay special attention to working women, students, youth, teachers and middle class intellectuals in other professions…and also activities of the city movement.”

An official of the Anti-Naxal Operation wing in Chhattisgarh spoke to Firstpost on condition of anonymity. “As Maoists aim at expanding their ideological base beyond Bastar and other forest territories, and also recruit cadre, which has declined over a decade, they are specifically using these burning national issues which have created controversy as a propaganda tool. This is also a way to garner indirect support for their cause (Naxalism) in Indian mainstream and reach out to their target groups.”

Over the years, there has been a considerable decline in Maoist cadre, as getting recruits for ‘Dalams’ (small units of armed Guerrilla force) from tribal areas has become increasingly difficult due to government’s two-pronged action plan — increasing offensive by security forces and development works in Naxal-affected territories. Tribals are also realizing the hollowness of Maoist ideology and violence being perpetuated on them in the name of ‘police informers’. As a result, over a period there has been a rise in Naxals surrendering to the State compared to their recruitment.

The propaganda machinery of CPI (Maoist) is not limited to attacking the BJP and the RSS or Centre’s policies; it has dubbed anti-Naxal offensives of the government as ‘fake with malafide intention’.

A series of offensives launched recently by security forces under ‘Operation Prahar’ to combat Naxalism in the core Maoist strongholds of Bastar has added a new dimension to the face-off between the State and the Naxals in Chhattisgarh. Operation Prahar is an anti-Naxal operation by a joint force comprising CRPF’s CoBRA battalion, Chhattisgarh Police’s Special Task Force (STF) and District Reserve Guards (DRG).

Negating State’s claim on the success of the operation in February, Maoists dubbed it as ‘fake’ and an ‘attempt by the state to suppress the revolutionary people’s movement of the Naxals’.

“Security forces have made false claims about the success of Operation Prahar against us. Through these operations, the government wants to construct a network of roads in Bastar, so that it can give access to corporate houses and contractors to loot iron ore and minerals, and destroy tribal culture. To fructify this objective, the government has been using security forces to kill innocent tribals through fake encounters by branding them as ‘Maoists’,” south sub-zonal bureau, Dandakaranya of CPI (Maoist) claimed in another statement accessed by Firstpost.

Maoists have always opposed road construction, as it gives security forces access to their hideouts lodged deep inside the forest.

The CPI (Maoist) claimed in the statement that its military wing — People’s Liberation Guerrilla Army (PLGA) — killed eight jawans of security forces during the period of operation in Bastar, against one casualty on their part.

“Contrary to their claim, we recovered three bodies of Maoists killed during the operation. We lost two jawans and not eight. It’s part of Maoist propaganda strategy. They attack the credibility of security forces in order to motivate their demoralized cadres. Particularly they do not admit major losses suffered by their PLGA formations, since these cadres are their core strength,” P Sundarraj, inspector general (Bastar Division), Chhattisgarh Police told Firstpost.

What gives teeth to Maoist propaganda?

Failure on the part of the government to reach out to a large section of tribals with schemes meant for the target groups, alleged fake encounters and atrocities by security forces and incidents like Sarkeguda encounter have helped Maoists to strengthen their base and garner support from locals.

One may recall the judicial commission report on Sarkeguda encounter of 2012, in which 17 people including six minors were killed by security forces in Chhattisgarh. None of them were Maoists.

Many experts believe that there continues to be a trust deficit between a large section of the tribal population and the establishment. Despite development in Bastar, there are several grievances amongst villagers, especially in remote areas. They lack access to safe drinking water, medical facilities and basic education, which Naxals take advantage of.

“There is a disconnect between the ongoing development and rehabilitation issues in the tribal belt of Bastar. Under the Forest Rights Act, a large number of tribals are unable to get their land deed (Patta). Tribals living in interior villages fail to get access to medical facilities and safe drinking water even today,” remarked CPM state secretary Sanjay Parate.

Posing as comrades in arms, the Maoist statement has finally asked the ‘exploited and oppressed tribals’ to join hands with the Naxals under the ‘Red flag’, stating that the PLGA is determined to strike hard by attacking the ‘Fascist forces’ (read government and security forces) riding on national issues.