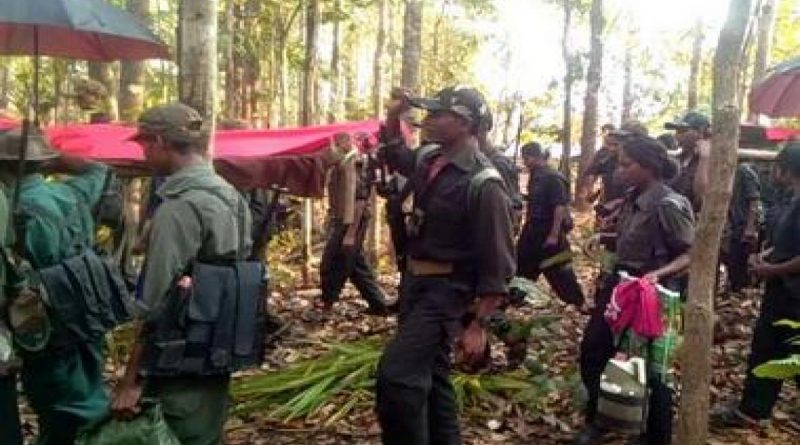 Rebutting the Chhattisgarh police’s claim that a large number of Maoists have been eliminated in the fierce gun-battle that took place on 21 March, the Naxals – in a first — issued a statement along with photos today claiming that they lost only three fighters against 17 jawans of the security forces.

It seems that the Maoists have unleashed a propaganda war against the State to counter the claims made by Chhattisgarh police.

As a proof of their claim, they have issued photos of the three Maoists killed along with their names, area of operation and villages they belonged to. Unlike in the past, this is probably for the first time that they have mentioned all these details. It may be an attempt to prove Chhattisgarh police wrong as the latter had claimed on 22 March that eight to 10 Maoists were killed during the gunfight.

On 21 March, a fierce gun-battle took place — inside the hilly and forested area of Minpa-Elamguda-Koraj Dongri near Chintagufa and Burkapal in Sukma district — between nearly 600 security force personnel and 250 Maoists.

This was one of the biggest setbacks and the most horrifying Maoist attack on security forces after 2017 incident, in which 25 CRPF personnel were killed. Later, in 2019 during Lok Sabha election, Maoists triggered an IED blast and killed BJP MP from Dantewada, Bhima Mandavi, along with his five security guards and a driver.

After the Saturday encounter, even Chhattisgarh Chief Minister Bhupesh Baghel, on the basis of inputs from the police, had said that a ‘large number of Maoists’ had been killed.

The police team failed to recover a single body of the killed Maoists from the encounter site, while they had recovered bodies of 17 slain jawans – five from Special Task Force (STF) and 12 District Reserve Guards (DRG) of Chhattisgarh Police besides 14 injured jawans.

It’s a known fact that Maoists usually take away the bodies of their slain comrades, to show that the security forces failed to incur any damage to the Maoist cadre.

Counter-terrorism analyst and an expert on Left Wing Extremism (LWE), Anil Kamboj had called the police’s claim as a ‘face saving exercise’.

“On what basis the police claimed that 10 or more Maoists were killed, including their leaders? This is surprising,” Kamboj, a former BSF official and a senior fellow at Institute of Defense Studies and Analyses told Firstpost.
According to the statement issued by CPI (Maoist), South sub-zonal bureau, Dandakaranya, and accessed by Firstpost, the three Maoists killed in the gunfight were Sakru, Rajesh and Sukku and all three belonged to Naxal-affected Bijapur district in Chhattisgarh.

“Three of our comrades got martyred while fighting bravely with the security forces. While paying our tributes to our martyrs, we are determined to continue our struggle against the state and fulfil the unfinished job. It’s a victory of the people (of Bastar) and PLGA,” the statement read.

The Maoist unit has also circulated photos of the funeral procession of three Maoists among the locals, which took place inside the forest in an undisclosed location.

In contrast to police’s claim that Maoists had snatched 12 AK 47 rifles, one Under Barrel Grenade Launcher (UBGL), one INSAS rifle and one Excalibur rifle, the Maoist statement gave details and posted a photo of weapons they took away from the slain jawans: 11 AK 47 rifles, two INSAS rifles, one SLR LMG, two UBGLs, 1550 bullets and six UBGL shells.

In an earlier statement, the Maoists had called the police claim of the success of ‘Operation Prahar’ – an anti-Naxal offensive – as ‘fake and ‘with malafide intentions’. The latest statement is an attempt to reinforce Naxal’s claims against the police and the state.

In the latest statement, the banned CPI (Maoist) has appealed the tribals of Bastar to ‘join hands with the Naxals to fight against the State for their rights and for Jal-Jungle-Zameen(water, forest and land)’ and against ‘fake encounters’ and oppression by the state on tribals.

“The Maoists have issued the photographs of arms and ammunitions looted by them, three killed Maoists and their funeral procession to tell the world that the claims made by the police were false. It’s also a part of their propaganda strategy. Through this statement the CPI (Maoist) has again challenged the state that their offensive against security forces and government would continue. They have also tried to justify their horrifying misdeeds as ‘revolution’,” a retired senior police official, who had earlier served in Bastar, told Firstpost on condition of anonymity.

According to a Chhattisgarh police official, the Maoists could be hiding the true figure, which they usually do. “Maoists never reveal their actual loss and always blame police to keep the morale of their cadre high,” the official claimed.