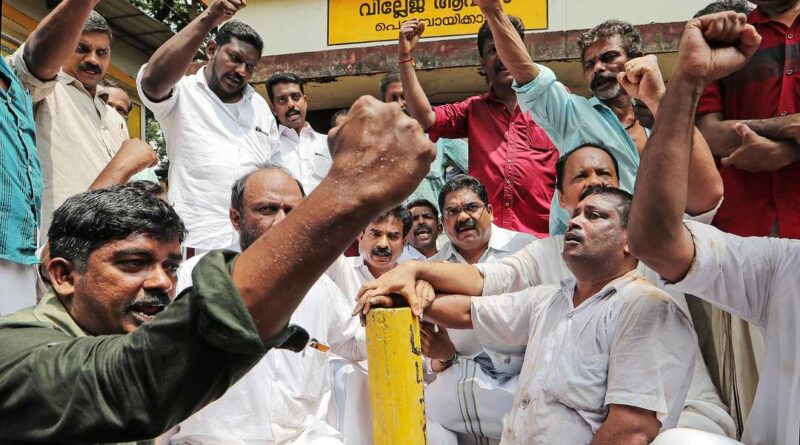 Kozhikode District, April 3, 2022: The CPI (Maoist) has extended its support to the anti-SilverLine protests being carried out in Kerala state by the affected people, backed by opposition political parties and activists.

Posters and leaflets issued by the CPI (Maoist) appeared in Kozhikode district on Sunday.

The Maoist posters, found in Mattikunnu area near Thamarassery in the district, criticized the state government’s SilverLine semi-high speed railway corridor and declared the party’s solidarity to the people opposing the project.

The posters, put up by cadres of the CPI (Maoist), also termed the state government as anti-people and equated the policies of the ruling LDF to that of the Narendra Modi-led government at the Centre.

The posters, handwritten by the Maoists in A-4 size papers, called for a people’s agitation against the state government, sources said.

They said as many as 17 posters were seen in and around a bus stop shed at Mattikunnu.

The state has been witnessing agitations by affected people supported by the Congress-led UDF and the BJP since the K-Rail authorities began erecting yellow pillars, as part of what the government says are surveys to study social impact assessment in residential areas and agricultural lands.

Opposition Congress-led UDF and BJP have come out against the project citing the huge environmental imbalances and economic burden the project is likely to cause.

Following the appearance of the posters, the local police and Kerala Thunderbolts, an elite commando force of the state police, carried out searches in and around the area for gathering information about the Maoists.

“We are monitoring the situation and have begun investigation,” Kozhikode Rural SP Dr A Sreenivas told PTI. He, however, refused to give more details.

This is the first time that posters in the name of the CPI (Maoist) have appeared criticizing the government’s SilverLine project.