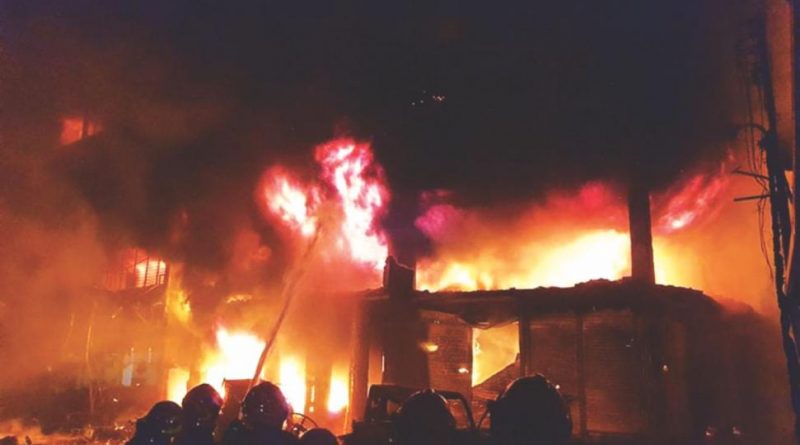 Cadres of the Netra Bikram Chand-led Communist Party of Nepal set ablaze three ward offices in three districts during the general shutdown today. The party had enforced the bandh to protest the arrest of Kathmandu Valley in-charge Maila Lama.

Police are yet to confirm the involvement of Chand’s party in the incident. Office of Ward No 10 at Sikharapur of Melamchi Municipality was set ablaze at 3:00am in Sindhupalchowk. The blaze has destroyed all the documents and furniture at the office. Locals had doused the fire after they came to know about it. A team of Nepal Police and Nepali Army had inspected the incident site at 6:00am.

Ward Chair Bhakta Bahadur Khadka said the fire had turned documents, furniture and other properties of the ward office to ashes. “I came to know about the incident at 5:00am. By that time, locals had brought the fire under control,” Khadka said. He said the fire had destroyed computer, printer, shelf, important documents and roof of the office. “The office was built at a cost of Rs 2 million recently,” Khadka said.

Melamchi Police Office in-charge Inspector Mahendra Darnal said the police had come to know about the incident at 5:00am only. “Preliminary investigation shows that the main lock was cut, documents were collected at one place inside the room and torched,” said Inspector Darnal.

Similarly, a ward office of Chandrapur Municipality in Chure Phedi was torched in Rautahat at midnight.  Petrol was sprinkled at the office and set on fire.

The Nepail Army bomb disposal team defused a socket bomb in Chautara near the ward office, according to DSP Nabin Karki. Karki said that one socket bomb and some bullets were found from the house of Rew Prasad Mainali during a search operation. Mainali is a cadre of the Chand-led outfit. Police have initiated investigation.

Likewise, a group of five unidentified persons attacked office of Ward No 1 of Kakani Municipality with a petrol bomb in Nuwakot in the wee hours today. Two computers, documents, furniture, four sets of fans, among other goods, were charred in the fire.