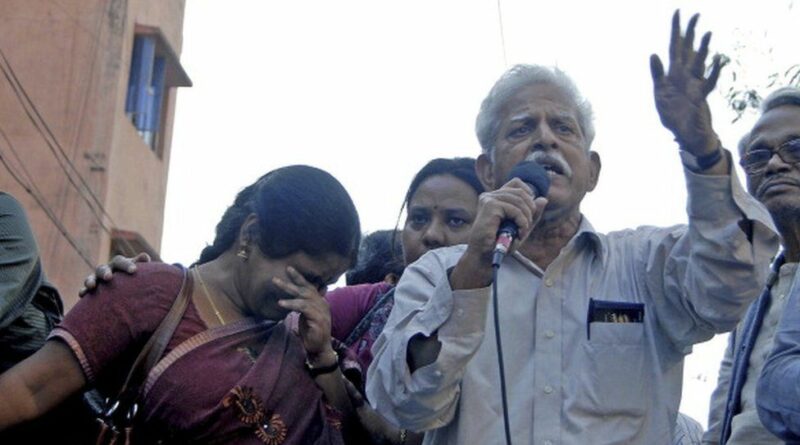 Mumbai, December 3, 2021: The Bombay High Court on Friday extended the time to return to jail for Elgaar Parishad accused Varavara Rao till December 20. The extension was granted after the Nanavati Hospital informed that it needs two weeks time to schedule and conduct a comprehensive medical examination of the Telugu poet and political prisoner for various ailments.

The court also sought a schedule of the tests from the hospital, which has to be given to Rao’s counsel as well as NIA in advance, and also sought a medical report on completion of examination before the next hearing.

Mr Rao, who had been granted medical bail for six months on February 22, had earlier been allowed extension from time to time.

The HC, on November 18, while hearing Rao’s plea seeking extension of bail term, had directed Nanavati Hospital to examine Rao, who has said he suffers from several ailments, and submit a report before the next hearing on November 29.

Thereafter, the HC, on November 29 directed the NIA to take Rao to Nanavati Hospital for medical examination after his counsels complained that despite the November 18 HC order, the respondents had not taken him to the private hospital. HC extended till December 6 the time to Rao to return to jail.

On Friday, Rao’s advocate Anand Grover informed a division bench of Justices Nitin M Jamdar and Sarang V Kotwal that the NIA has not yet followed up as per HC order and the same is ‘very serious’. However, advocate Sandesh Patil for NIA objected to this and submitted that the private hospital had sought time for examination.

Apoorva Shrivastava, assistant general manager of the Nanavati Hospital told the court that Rao needs to be seen by a neurologist, nephrologist and psychiatrist among others to examine his medical condition and therefore the hospital requires two-week time to comply with HC order.

Patil submitted that while Rao, in his plea had raised concerns pertaining to cataract, appendix and hernia, under the HC’s directive, he wanted to undergo all kinds of tests and let the medical examination be confined to the reliefs sought by him.

However, the court said that only doctors will be able to convey as to whether Rao continues to be unwell and based on that it can decide his plea.

Patil, on instructions from the Nanavati Hospital submitted that the applicant will be examined comprehensively at the agency’s expense and a report will be submitted by December 16.

Grover said that once the hospital prepares a schedule of the tests to be conducted on Rao, the same be given to Rao’s lawyer and NIA, which the HC accepted and posted further hearing on Rao’s plea to December 17. The Court extended time to surrender for Rao till December 20.

Rao’s plea said that the six-month period following his release from jail had ended on September 5 and he continues to suffer from various ailments that require treatment.

The HC had earlier set a condition that Rao would not leave the city. Rao also sought modification of the condition seeking that he be allowed to return to Telangana.