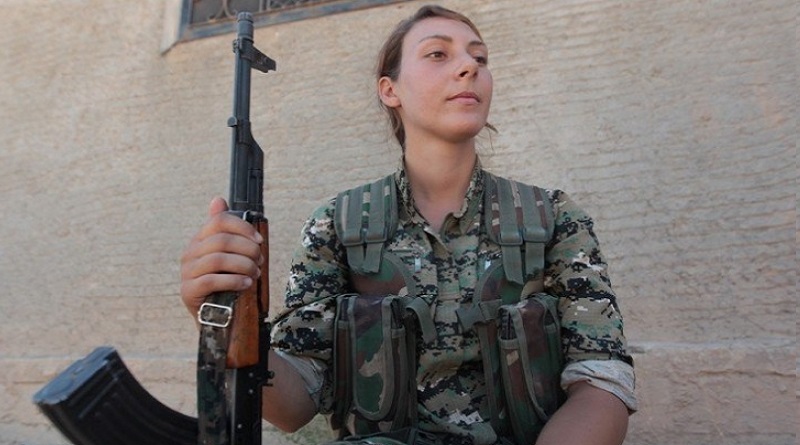 Roza is a 22 year old Swedish woman. She has been fighting in the frontlines with her friends from the YPJ for over two years now, she has participated in countless operations to liberate dozens of territories. With her humble attitude and her smiling face, Roza’s YPJ friends call her the “Swedish flower of the fronts”.

She is almost fresh out of high school. She used to work in the dry cleaners her family owned, and led an ordinary life. She followed world and Middle East news from her television. In time, she started to feel as a natural part of the Rojava Revolution and the Kurds’ fight against ISIS barbarism. She started to focus more on the issue, and she did research. She had always had a soft spot for solidarity and charity. All in all, she reached a decision. “I actually understood that one of the most important places a woman can do good for all the women in the world and contribute to the revolution was the YPJ, even before I personally joined the YPJ. Shortly before I joined, I was convinced,” says Roza. She left her family and her job at age 20 and arrived in Rojava.

From Shaddadi to Manbij

She made it just in time for the final days of the Kobanê resistance. She participated in the Shaddadi and Manbij operations from the start. Especially in the Manbij operation, she was fighting until the end. She took part in efforts in almost all areas of Rojava, both in the fronts and in the liberated zones.

‘YPJ means so much to me’

She reminisces about routine life in Europe and talks about how meaningful the YPJ is for her: “The young women who join the YPJ learn of their freedom, break away from the dominant system and become individuals. They gain the women’s perspective and ideology. This continues in a beautiful cycle. The women’s struggle in the Middle East is exalted and women are emancipated. And, the women don’t stop there and they fight in the front lines against a barbaric element like ISIS. Being here in the Raqqa front was indispensable for me. I want to share the war, victory and the joy of freedom.”

Her family is proud

Roza had no issues with her family. She says she convinced them. She says her family now knows more about the women’s struggle in Kurdistan and talk about it to their friends, and continues: “Of course they are very much afraid I will get wounded here or worse, but they are also very proud of me.”

Roza’s future plans also involve Rojava. She wants to stay in Rojava, settle in and serve the people, especially children. She wants to work in child development and with young people and support their education. One of her biggest dreams is to work in hospitals

* This article first appeared on Yeni Özgür Politika newspaper and was translated by ANF English service.