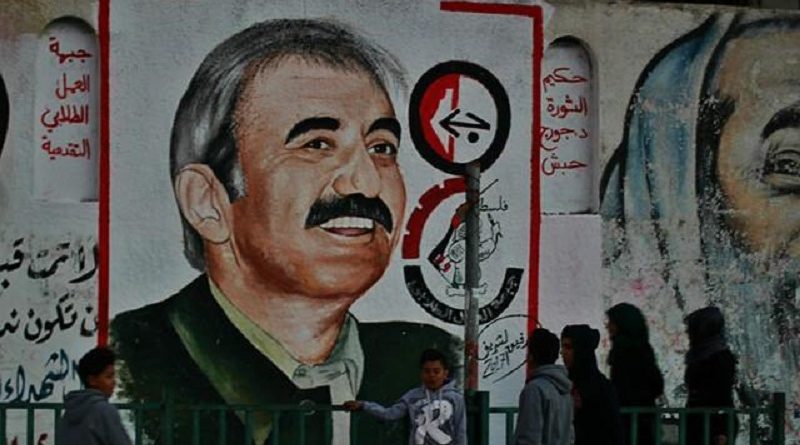 Today, we mark the ninth anniversary of the passing of the national leader, great revolutionary and internationalist George Habash, a man of great principles, commitment and revolutionary values, reflected in direct confrontation with the Zionist enemy and the forces of colonialism, imperialism and reaction. Throughout his life, he struggled for freedom and liberation, progress and unity for the Palestinian people and the Arab nation. He lived a life of militancy and revolution since he was a student at the American University of Beirut in the late 1940s until his passing in Amman, Jordan in 2008.

As we remember George Habash “Al-Hakim,” and his human and moral qualities and his intellectual and revolutionary achievements, we vow our fidelity to the principles, values and goals for which he struggled and embodied in his lifetime and struggle. He did not abandon his principles or relent from his vision in order to access power or authority, despite all the difficulties that he faced throughout his life. Today, as we face the threatened liquidation of our national cause, we pledge to uphold the convictions of Al-Hakim, including:

First, adhering firmly to Palestine, representing the main target, both in the founding of the Arab Nationalist Movement and later, the Popular Front for the Liberation of Palestine. He gave everything for the struggle and did not aspire to authority, prestige or wealth. He stood firmly and boldly against all projects and liquidationist “solutions” targeting Palestinian rights, including the Oslo agreement. The time has long since past for the official Palestinian leadership to abandon this path and its obligations. Now, our priority is the national goal of restoring the Palestinian struggle for liberation, return and self-determination.

Second, emphasizing the implementation of the right of Palestinian refugees to return to their homeland, from which they were expelled under the oppression, massacres and terror of the gangs of the Zionist enemy. Al-Hakim considered this central to the conflict with the enemy and always stood against all Arab and international initiatives to undermine this right or circumvent the return through so-called resettlement or compensation as unacceptable and requiring resistance. The right of return and compensation is an inherent, fundamental individual and collective right for all Palestinians and cannot be waived or compromised.

Third, the importance of Palestinian national unity as the anchor for the strength of our people, and one of the most important mechanisms of strengthening their resilience and survival on their homeland. Al-Hakim was always dedicated to “national unity, ending division and upholding the resistance.” Today, there is a continuing division with disastrous consequences and infighting over authority and privileges and the affluence and prestige of a few, compared to the rampant poverty, unemployment, injustice, inequality and social and economic pressures faced by the majority of the Palestinian peple in the homeland and in all areas in exile and diaspora.

Fourth, upholding democracy in Palestinian internal life, both within parties and the Palestinian national institutions. George Habash insisted on stepping down from his positions, constantly called for renewal, development and the promotion of youth to the front ranks of leadership, in order to protect the Palestinian institutions against ossification and weakness. Today, this demands that we rehabilitate and rebuild the role, structure and framework of the PLO as a tool of struggle for the Palestinian people wherever they are.

Fifth, focusing on the national and international struggle with the Zionist and imperialist enemy. Al-Hakim always recognized that the Zionist project is an imperialist venture backed, supported and sponsored by colonial powers greedy for the bounties of the wealth of the Arab people, which requires impeding their development, progress and unity. These powers will never be of support or help to achieve our people’s rights or engage in a just “peace process.” Instead, this framework is one of full support to the Zionist enemy while encouraging reaction and division among the Arab people. A national project is necessary to take on this confrontation, standing with all international forces seeking liberation, justice and peace.

In addition to all of the above, George Habash truly exemplified a revolutionary school of awareness, culture, knowledge and rich experience, dedication and clarity. His exceptional principles, humility, simplicity, respect and courage will remain a beacon for his comrades and all freedom fighters in their ongoing march until we achieve the goals of our people for liberation, return and self-determination.