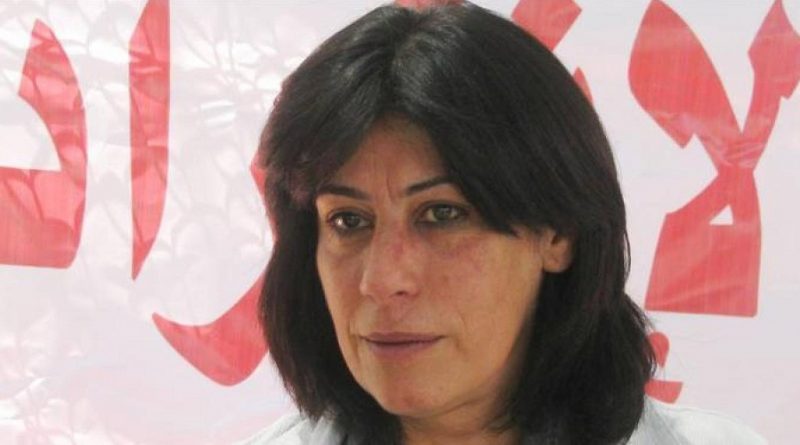 Comrade Khalida Jarrar, leader of the Popular Front for the Liberation of Palestine, said that the attendance of a Palestinian leadership delegation, headed by PA president Mahmoud Abbas, at the funeral of war criminal Shimon Peres embodies the humiliating relationship of this defeated “leadership” with the occupation, saying that such a leadership cannot represent the aspirations and hopes of our people.

In an interview with Sawt al-Shaab radio, Jarrar said “How can the leadership of an occupied people participate in the funeral of the perpetrator of massacres against its people, including the attack on Qana in 1996, knowing that this war criminal is also a founder of the settlements, developer of nuclear weapons, and responsible for the killing of our people in occupied Palestine ’48 on Land Day 1976?”

Jarrar said that this action by the PA leadership was a direct insult to the mothers of the martyrs, the prisoners, the wounded and all of those with demolished homes, and all of the Palestinian people who are still suffering daily from the occupation and its crimes. She also noted that the humiliating justifications made for this participation by the PA leadership do not reflect the positions of the Palestinian people in any way who have a consensus to reject this participation in Peres’ funeral. The Palestinian people are proud with a strong will, despite their difficult circumstances, said Jarrar.

Further, she noted that it is clear that the PA leadership is committed to the approach of bilateral negotiations and seeking to beg the occupation that they are willing to return to occupation. She also noted that the PA participation in Peres’ funeral also gives cover to Arab normalization with the occupation.

Jarrar noted further that it is clear that there is no interest on the part of the PA leadership in an alternative political approach, emphasizing that it is necessary to express the overwhelming popular rejection of the PA participation in Peres’ funeral and the entire dangerous approach it represent. She noted that in over 70 years, the Palestinian people have never raised the white flag of surrender and have continued intifada and resistance to the occupation: that while the people never give up, there are “leaders” who give up. Jarrar reiterated that a leadership that participates in the funeral of the war criminal Peres is not suitable for a people who have offered so many sacrifices for their freedom.