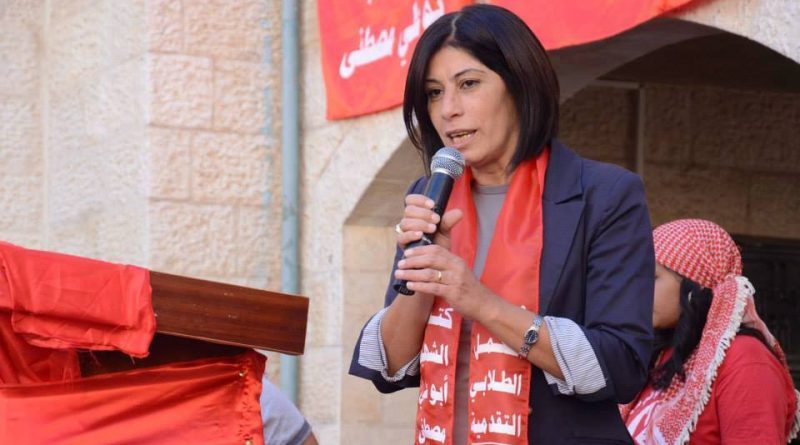 The Popular Front for the Liberation of Palestine confirmed that the Zionist occupation forces launched a pre-dawn campaign of raids across the occupied West Bank of Palestine on Sunday, arresting a number of leaders and activists of the Front, led by the Palestinian Legislative Council member Khalida Jarrar, feminist activist Khitam Saafin and former prisoner Ihab Massoud, as well as a number of activists in al-Khalil. The Front declared that these attacks will not stop it from continuing its role in resistance to occupation and confronting the crimes and projects that attempt to liquidate the Palestinian cause.

The Front emphasized that these arrests only underline the futility of the choices of the Palestinian Authority to continue to bet on settlements, “peace process” and security coordination. It also confirms the correctness of the Front’s position and its continuing struggle to build the resistance and the primary contradiction with the occupation as a major feature of its approach and political positions.

The Front further stated that these arrests have come after the major campaign of incitement launched by the Zionist entity and its prime minister, the war criminal Benjamin Netanyahu, against the Popular Front for the Liberation of Palestine and the resistance factions.

The PFLP urged the Palestinian masses to escalate the popular movement to support the struggle of the brave prisoners in Israeli jails, for Jarrar and Saafin and the prisoner Muhammad Allan, on hunger strike for 25 days.

The Front promised to continue to defend the rights and principles of the Palestinian people. Continued targeting by the occupation only emphasizes the importance of continuing the path to return and liberation.

Popular Front for the Liberation of Palestine
July 2, 2017