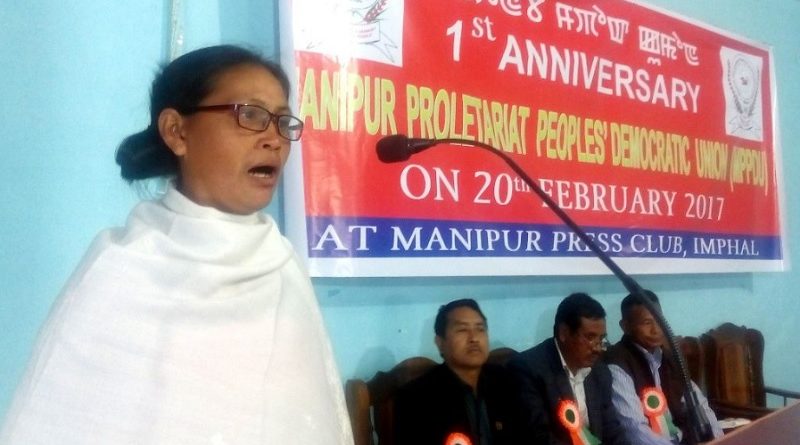 Why justice is not done to my son?- Taratombi

She was honored by the Manipur Proletariat Peoples’ Democratic Union (MPPDU) on its first Foundation day held held at at Manipur Press Club here in Imphal today by presenting her gifts.

Speaking mother of Ch. Taratombi Devi asked the authority the reason for taking so long for delivering justice to her son. Sanjit along with Rabina was killed in broad daylight at Khwairamband keithel on July 23, 2009 in allged fake encounter. The case is now under CBI scanners. A Police commando identified as Herojit had also confessed that he had killed Sanjit in cold blood under the instruction of his higher up.

With tears streaming on her Cheek, Taratombi appreciated the people of the state for supporting her in fighting for justice of her son.

The 1st foundation day function of the MPPDU was attended by Wangkhemcha Shamjai, President of All Manipur Working Journalists’ Union (AMWJU), as  Chief Guest while Meghachandra President of MPPDU presided over it. President of All India Youth Federation Ch. Sanjit attended as Guest of Honour.

He also recalls the sacrificed of pioneer leader Hijam Irabot.

“Peoples of today seems to have less respect for our leader Hijam Irabot. Except celebrating a month long observance function during September people almost forget our leaders”, Shamjai said. He further appealed that people should fulfill the dream of our leader.