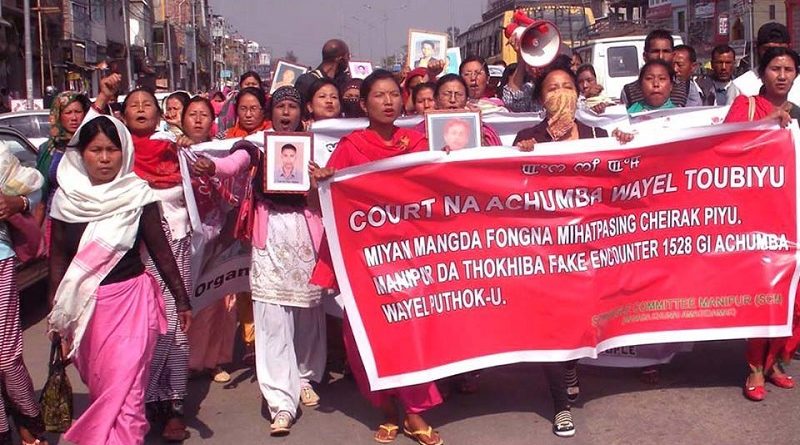 In a mass rally organised today, effigies of CM O Ibobi, retd DGP Y Joykumar and CO Ak Jhaljit were burnt at Keishampat Junction, Imphal demanding punishment of those involved in the numerous fake encounter cases in the state.

The rally which started from Keishampat Leimajam Leikai was planned to march till Cheirap Court, Imphal but police force halted them at the Keishampat Junction during which they burnt down the effigy of Ibobi, Y Joykumar and Ak Jhaljit.

It may be mentioned that a total of 1528 individuals were allegedly killed in ‘fake’ encounter cases in the state during the year 1979 till 2012 under the cover of AFSPA.

It may also be mentioned that the infamous Sanjit’s ‘fake’ encounter case was recently re-opened by the Central Bureau of Investigation after numerous appealed made by Sanjit’s mother Ch Taratombi and the trial is going on in the court.

These undesirable killing by the police commandos has been made possible in the state by the draconian AFSPA, she said.

She added that until now justice has not been given to the victims of the fake encounter cases since the state government has been submerged in the trends of corruption.

She said that EEVFAM along with other students organisation has taken up this allegation during the election timing as to let the candidates, and political parties assured to the people that they will give justice for the all the fake encounter cases after winning the election.

Even do head constable Th Herojit who is the main accused of the Sanjit’s fake encounter case conceded that Ak Jhaljit is involved in killing of Sanjit, the government has not taken up any action against him which truly shows that the government is unjust, said Renu.

She added that EEVFAM appealed the CBI to speed up the Sanjit’s case and punish the culprits who were involved in the killing of Sanjit.

And also the government should give justice for all the cases of the fake encounter cases in the state, added Renu.

KSA president Moirangthem Laxman said that they are not against any political party but against the dirty system of the government.

Before the election all the candidates should assured the people through media that they will give justice for all the fake encounter cases, when they are in power, he added.

Laxman further added that the coming government of the state should draw off ASFPA completely from the state.