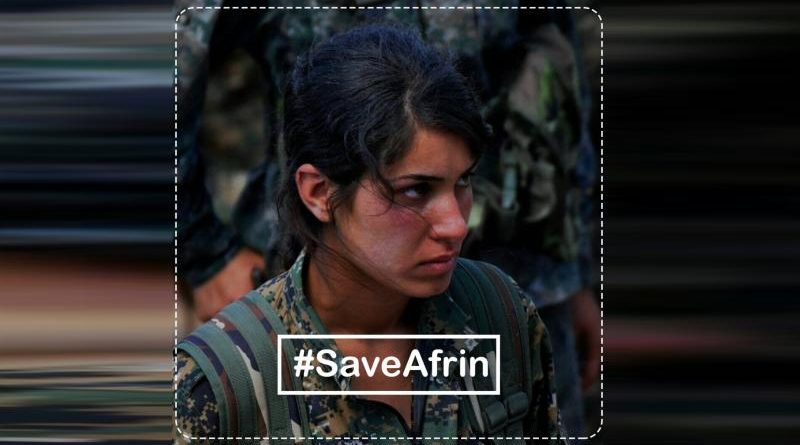 In advance: The “Syrian civil war” is a proxy war between imperialists in the northern area of the Syrian people, where Arabs, Kurds, Syrians, Assyrians, Turkmen and other ethnic groups live. The main culprit of this bloodbath and genocide is US imperialism and its lackeys in the region (Saudi Arabia, Turkey, Qatar, Israel & co.), who through their interventions, attacks and mercenary gangs set everything in motion. Syria, a semi-feudal and semi-colonial country under the authority and leadership of Russian imperialism, is the central battlefield in the Yankee struggle to reaffirm even more its world hegemony and not to overthrow Russian imperialism but to lift it up again.

Nowadays, there is no relevant and organized faction of armed struggle that represents the international proletariat and the communists in this conflict.

The United States are the main enemy of the peoples of the world and this is clear right there, between the Zionist colonial entity of Israel, the NATO state Turkey, murderer of Kurds, the steadily devastated and occupied Iraq, the artificial monarchies like Saudi Arabia by the grace of the Yankees and the bloodstained Syria. They are responsible for the bloodshed in this region! Therefore, a “tactical alliance” is no excuse to allow these enemies of the people to build 13 military bases in a foreign country. All imperialist intervention and interference must be combated and this is the correct slogan that should sound: Death to the invaders!

The imperialists are beasts, child killers, blood-thirsty, and they do not know loyalty and honor. Their interests are incompatible with the interests of the peoples. And the alleged “tactical alliances” from a weak position will logically lead to a dead end or even to the abyss and betrayal.

Currently, the brave Kurdish fighters have to suffer once again. The sundry imperialists who abused them for their own interests, now let them die again. Now, land troops from Turkey, a NATO state, parade through Syrian territory, not without the permission of the Yankees and also of Russia, which sells the national interests of Syria. Abandoned by Americans and Russians, the Kurdish people of Afrin, led by the YPG, resist heroically.

Of course, there are some cases of ethnics evacuations in areas controlled by the YPG. And, of course, there are also, with more intensity, when other armed factions later gain control of an area. Something like that is what happens in wars, even more when other classes and not the international proletariat are the leaders in these confrontations, and we hope that both the YPG and all the other armed forces in the region will do so. And with total certainty, there are evacuations for ethnic, political and religious reasons, there are purges and mass murders when the reactionary gangs under the leadership of the fascist Turkey and its army invade the Kurdish areas of Rojava in Syria emulating the great Ottoman myth.

Therefore, the resistance of the Kurds and other ethnic masses on the side of the YPG against Turkish aggression is right and they have no other choice. Despite criticizing the line and direction of the Kurdish national movement and its haggling with imperialism, our solidarity with indigenous people, Kurds and other fighters against aggression remains in force, as well as with the internationalists fighting on their side. We condemn Turkey’s interference in Syrian territory.

The Leopard tanks of the imperialist RFA with which Turkey is advancing, our Kurdish brothers and sisters on the streets of our cities and the attacks of the RFA police on them, remind us of our responsibility in this fight. Let’s practice solidarity! Let’s intensify our resistance against the ruling system!

Victory for the resistance of the Kurdish people and other peoples of Afrin against the aggression of the Turkish state!
Death to imperialism!
Death to the invaders!