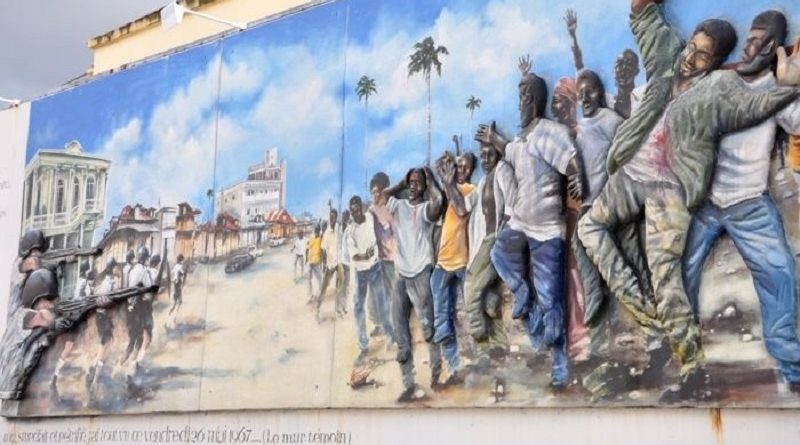 Fifty years ago, on the 26 and 27 May 1967, the French government repressed in cold blood a demonstration by construction workers in Guadeloupe. Construction workers demanded a 2% wage increase and organized a rally in front of the Pointe-à-Pitre Chamber of Commerce. The CRS and then the gendarmes (the “red kepis”) opened fire on the demonstrators and chased them all night, checking one by one all the streets of the city.

This colonial massacre is part of a long tradition of French colonialism of bloody repression of popular and independent movements in the colonies (in Setif in Algeria on May 8, 1945, in Haïphong in Vietnam in 1946, in Casablanca (Morocco) in 1947, in Madagascar in 1947, the massacre of 17 October 1961 and many others …).

Fifty years after the massacre, the French state continues to maintain secret archives and the truth is not yet made. Today the people of Guadeloupe continue to demand justice and truth.

A brief historical review of the colonial rule of Guadeloupe

Colonial France began to occupy Guadeloupe as early as 1635 with various colonial companies. Before that, the population of Guadeloupe resisted to numerous invasions of the Spanish colonists from 1496.

The occupation of Guadeloupe, especially by the Chevalier de l’Olive, who had become the governor of Guadeloupe by Richelieu, marked the beginning of the great colonial massacres committed by France in Guadeloupe. From then on, the people of Guadeloupe never stopped resisting the settlers.

The first slaves arrived on the island in December 1644 but it was from 1654 that the number of slaves transported from Africa began to increase drastically. The slaves were sold as soon as they arrived at the port and the name of the master is stamped to them with hot iron on the chest. Some slaves managed to escape and some fought hard against their former masters: they burned the harvests, poisoned their masters … Those were the ones called “brown negroes” by the colonists who repressed them violently (ears removed, hams cut … ).

In 1656, a great uprising of slaves took place. This one was led by Jean Leblanc, native of Angola and by Pèdre, native of Cape Verde. They faced the settlers for 15 days but ended up being massacred, Pèdre and Leblanc were quartered.

After the French Revolution, in August 1793, at Sainte-Anne, a revolt of more than 1200 slaves took place. After fierce battles they were also massacred.

In 1794, during the English occupation, the governor Victor Hugues enlisted more than 3000 Guadeloupeans to fight against the English. In the same year he declared the abolition of slavery, it was the first “abolition of slavery” in Guadeloupe. It is, however, a strange “abolition”: the slaves must continue to work for their former masters and to move, they must be in possession of a laissez-passer.

This short “abolition” of the slave ceased in 1802 with Napoleon who sent a squadron on May 6 to restore slavery as quickly as possible. The resistance is strong, the restoration of slavery is done by crushing the insurgents led by Ignace and Delgres. Several thousand Guadeloupians were massacred.

In 1848, the abolition of slavery was again proclaimed, but soon, in the face of the many former slaves who rejected wage labor, a law on compulsory labor was established.

After the Second World War, in 1946 the status of Guadeloupe changed, without any consultation of the Guadeloupean people of course, it is the law of Assimilation: Guadeloupe becomes a French department. Since then the social and independence struggle has never ceased in Guadeloupe.

The year 1967 was a great year of popular revolts in Guadeloupe. These culminated with the strike of 5,000 construction workers who were suppressed in blood on 26 and 27 May 1967.

In the 1960s, many cane mills began to close. The massive cultivation of cane sugar is the result of the colonial economy of Guadeloupe, where large monocultures of cane sugar formed more than 50% of the cultivated land. With the closure of sugar factories, many workers find themselves in misery and are going to swell slums around cities to work in the construction sector that is booming. These workers ruined by the closure of their factories work in extreme conditions for wages of misery.

In 1967, the legislative elections were held. The GONG (National Organization Group of Guadeloupe) called for boycotting them and for claiming national independence. There was more than 53% abstention. The GONG was founded in 1963, it was the organization at the forefront of the struggle for national independence. The GONG was based on Marxism-Leninism and Mao Zedong Thought. The GONG had as line the People’s National Democratic Revolution for the independence of Guadeloupe, it rejected autonomism and reformism. It opposed in particular the revisionists of the PCG (Communist Party of Guadeloupe) which relegated a possible self-determination of Guadeloupe after firstly haven took the power in the French metropole. 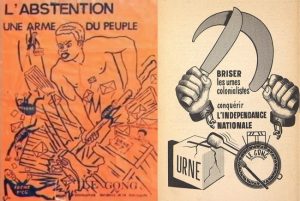 In March 1967, a major revolt took place against the European merchant Srnsky. He let his dog on Mr. Balzinc, a disabled shoemaker-nailing pedestrian, saying “Say hello to the negro”. The revolt will last for three days. Planes full of CRS had to come to the rescue. The shop and the car of Srnsky were burned. 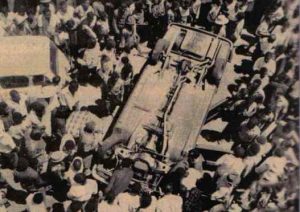 On May 1, a demonstration for the Workers’ Day was organized at the call of the GONG and gathers hundreds of protestors. 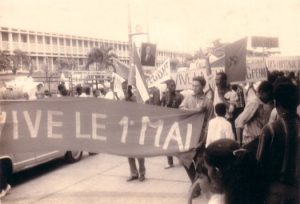 On May 24, 5.000 construction workers went on strike. They were demanding a 2% increase in wages. On the morning of May 26, the workers gathered in front of 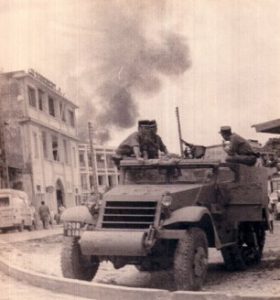 the Pointes-à-Pitres Chamber of Commerce where the negotiations were held. The bosses don’t want to give up anything. Mr. Brizzard, representing the employers, would have said: “When the negroes will be hungry, they will resume work.” This will trigger an enormous anger among the struggling workers who will not hesitate to attack the forces of repression. Shortly afterwards, Prefect Bolotte ordered his troops to fire in the crowd. Firstly, the CRS were repressing, but then came the gendarmes, the “red kepis”. Those will pursue the demonstrators throughout the afternoon and all night shooting. The action of Prefect Bolotte was approved by Secretary of State Jacques Foccart, an expert of anti-colonial repression very close to De Gaulle. The crackdown will continue until 27 May.

In hospitals, deaths are not recorded. The bodies “disappear” and the official report of the prefecture will announce only 7 dead and 60 wounded. This “sum” is taken up by the entire press, which relays information as  news. 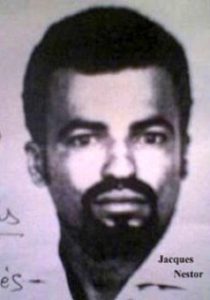 The reality is that that night, it was the massacre of more than a hundred Guadeloupeans that took place. The first to be martyred under the bullets of the armed forces of the French State is Jacques Nestor, a great militant of the GONG. The French State was clearly seeking to defeat the independenceists that they saw as the origin of the demonstrations and as the greatest threat to French colonialism in Guadeloupe.

In addition to the dead, there were dozens of wounded and hundreds of arrests. In June 1967, 18 GONG independentists appeared before the courts in Paris. On the side of the State, no one was tried as responsible for the massacre.

It was only in 1984 that the secretary of State for the overseas Georges Lemoine announced the figure of 87 dead. But this still has nothing of official recognition and is far from shedding light on the truth about the massacre. The archives are still closed today.

The task remains the same today

Today, Guadeloupe still suffers from colonial domination on all levels: economically, politically and socially. The economy is still dominated by the békés, it has remained a colonial type of economy serving the interests of the great French monopolies. Inequality continues to grow and poverty is increasingly widespread. This was particularly noticeable after the 2007 crisis.

Guadeloupe has never ceased to revolt against the French State. We recall the great general strike of 2009. This strike has shown that the people of Guadeloupe does not surrender and is ready to fight to assert their rights.

The Guadeloupeans continue to courageously reject the French state, this is seen especially through the elections. During the presidential elections of April and May, there was a 60% abstention in the first round and 50.8% in the second round.

The only way for Guadeloupe is to get rid of the colonial domination of the French state in order to regain its destiny in hand. The only way to achieve this is through revolution, not through elections, a revolution led by a genuine Communist Party firmly based on Marxism-Leninism-Maoism.

Justice and truth for the victims of Mé 1967!

Long live the struggle of the Guadeloupean people!