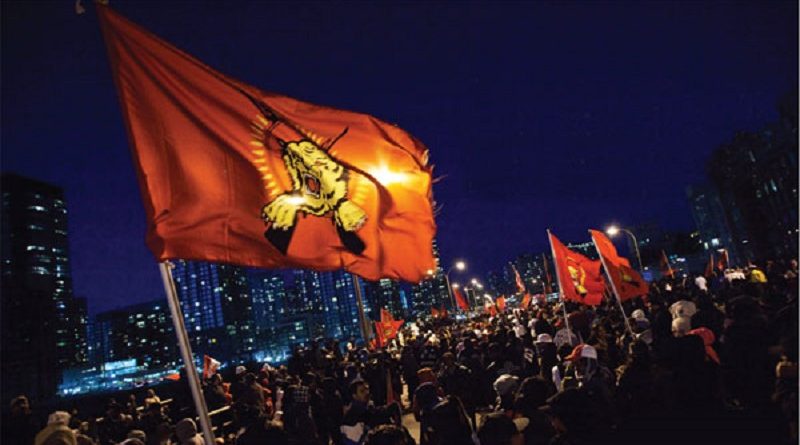 Liberation Tigers of Tamil Eelam (LTTE), thought to have been decimated after the killing of its chief Velupillai Prabhakaran, has been making efforts to regroup and revive internationally with focus on Sri Lanka and Tamil Nadu.

A secret document of the Internal Security Wing of the Ministry of Home Affairs (MHA) says that, ʹA significant number of LTTE remnant cadres are still nursing strong grudges against India after their defeat in 2009.

Recently, some members of the Nediyavan group visited North Sri Lanka from Europe and assessed the quantum of arms and ammunition, still remain cached in to explore the option of reviving the militancy at an appropriate time.ʹ

The availability of large caches of arms and ammunition in the north could pose a threat not only to Sri Lanka but also to India.

The attempt to revive LTTE is certainly a bad news for India since the ISI is using Sri Lankan territory for recruiting and training terror operatives to carry out subversive activities in India.

And those making efforts to revive LTTE are likely to join hands with ISI, which is troubling the Indian security establishments, sources said.

The MHA document also says that in the recent past, Maoist cadres were sighted in the tri-junction area bordering Tamil Nadu, Kerala and Karnataka.

The LTTE cadres in the past have trained Maoists and Tamil Nadu Liberation Army (TNLA) in the dense forests in Tamil Nadu.

Dangerous turn of events may take place if the remnant cadres of LTTE join hands with Maoists and ISI, an intelligence official told The Hans India.

The officer also referred to the recent protests in Tamil Nadu in support of Jallikattu, where posters of the late LTTE chief V Prabhakaran sprang up and the protesters, including highly-educated people, expressed their views that they were proud of Prabhakaran who was the true hero.

A 2008 report of the FBI says, LTTE was one of the most dangerous and deadly extremist outfits in the world and the world should be concerned about the outfit as it had inspired networks worldwide, including the Al-Qaeda.

ʹIn view of this, India should take serious note of the attempts being made for revival of LTTE because it causes more harm to India than Sri Lanka as several other terror outfits take advantage of the situation,ʹ another intelligence official said.