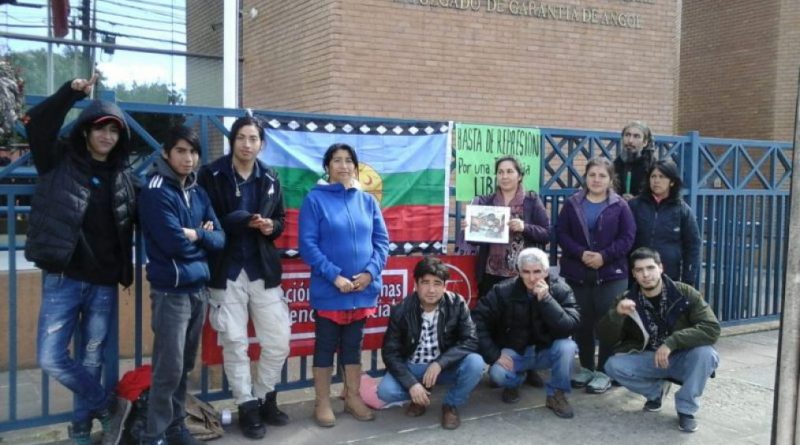 On September 5, 6 and 7, the trial against Luciano Torres Toro, young Mapuche brother of Silvestre Torres Toro, who was shot by police officers in April 2017, was held in Angol. In order to show support and expose this political persecution by of the State against the family of Silvestre and Luciano, the Association of Victims of Police Violence (of which the family of these young Mapuche are a part), fulfilling the agreements taken after their recent meeting of victims, promoted solidarity and was present on Thursday and Friday outside the court.

Important was the assistance of Bernardo Villanueva, father of Luciano Villanueva (20) who was killed in Parral, and of Juan Toro “Shakamu”, a rapper who was run over by the Armed Forces of Carabineros in 2013, and was left with multiple scars. They, as members of the Agrupación de Víctimas, decided not only to move for their own causes, but, advancing in the idea of ​​collective support being necessary, also became part of this action.

Luciano’s family members, democratic lawyers from La Araucanía, the parents of the young Brandon Hernández Huentecol and the Popular Revolutionary Student Front (FERP), an organization which is part of the support network of the Victims Association, also attended this call.

The prosecution sought to blame Luciano for the use of firearms, carrying firearms and carrying ammunition, the two first charges being discredited. The young man, since the judicial persecution against him began, has had to comply with house arrest as a preventive measure, while the carabinero who shot and beat his brother Silvestre remains free and unpunished.

The mother of the Mapuche youth, Guillermina Toro, was grateful for the many gestures of solidarity and has also taken the path of helping others who have suffered police violence, participating in the activities commemorating the assassination of Manuel Gutiérrez this August in Santiago.  The meeting of victims held on the 25th of the same month, where it was decided to organize the collective support for Luciano’s trial, was decisive.

The family of Silvestre and Luciano have been the target of constant harassment and police repression in various raids on their community located in Ercilla, where members of the Carabineros GOPE [Special Police Operations Group] have repeatedly entered with war weapons, fulfilling the tasks demanded by the current war of low intensity against the Mapuche people. This humble action is a sign of solidarity that will strengthen the struggle for true justice and against impunity, as well as for unity between the Mapuche and Chilean people.

The announcement of the ruling will be made on the 12th of this month. Therefore, we call on all democratic people committed to the just struggles of the people to be attentive to the resolution taken by the courts.