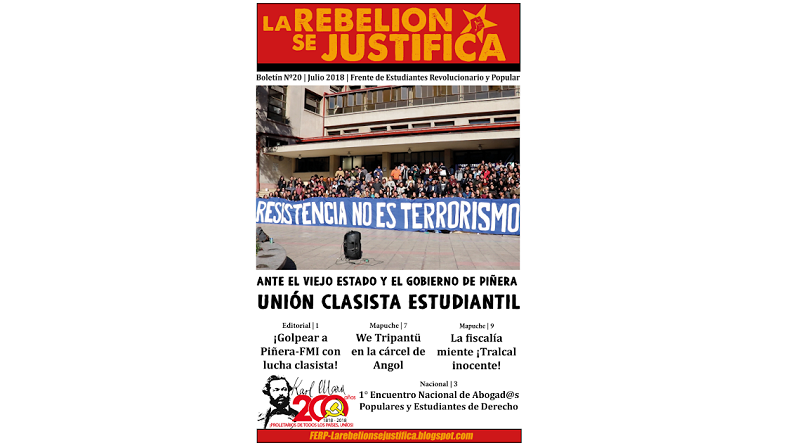 Already, 100 days have gone by since the reactionary Piñera and his government have taken over. It shows in a most open way the character of the Old State, how it serves the big bourgeoisie and landowners, the same as Bachelet, and how it has deaf ears to the demands of the people, while it pillages and represses them, all like a loyal dog of its master, Yankee imperialism.

They are demonstrating an intention to grovel to business interests “so that Chile can develop its potential,” benefitting a handful of millionaires. Meanwhile, they continue to rob the people of their shabby wages, and health, education, housing, etc. continue being unattainable for the country´s poor.

With the modification of the abortion law, which lowered the requirements for conscientious objection and permits those public employees who object [to providing abortion services] to continue working for the State, Piñera trifles with this demand [for abortion services] which took years of struggle to win, and scorns the hundreds of women who have been raped or who risk their lives to clandestinely get an abortion.

After his presidential campaign in which he promised to extend scholarships to 90% of students, he is now saying that this measure is conditional upon the economic growth of the country, showing that he traffics in the dreams of the people to win votes, and later he washes his hands of his false promises.

They are already intending to restrict this scholarship for students implicated in occupations, as a form of intimidation, and they have taken measures like the unilateral closing of Amunátegui high school.

This government continues with the militarization of Wallmapu, now sending police who are specialized in “combatting terrorism in Araucanía.” This militarization is all that the modification of the antiterrorism law adds up to. It makes the Old State’s persecution of the Mapuche people even stronger.

But its anti-people measures have not come cheaply, and there are hundreds of thousands of people in the streets demanding justice and fighting for the rights of the people, for fair pensions, for the freedom of Mapuche and Chilean political prisoners, health, etc. Faced with this, the Old State has left no stone unturned in disposing of all its repressive apparatus to disperse and intimidate the masses.

The student movement has been a headache for those have governed this Old State, and this year it is the women comrades who have protagonized this struggle, against sexual assault and abuse, against sexist and patriarchal education, carrying out more than two months of national mobilization which brought such a level of tension that Piñera was obligated to launch a “Women’s Agenda,” strongly rejected by the masses, because it deepened the precarisation of life.

This surge in the women’s struggle is finishing up, and a good number of universities, institutes, and high schools that were mobilized are ending their occupations and strikes, having obtained various conquests. This demonstrates the justness of these demands and the strength of organized women who exercised leadership of the rest of the student movement.

But in order for all these conquests not to turn into dust once the mobilizations are ended, it is necessary to fight for the historic demands of the student movement, which aims to sweep away semifeudalism and clientelism in education, and to democratize educational institutions.

For a 3-tiered Co-government and election of the authorities, so that final decisions aren’t made by a group of authorities inside four walls, but rather by students, staff, and professors in a three-tiered way. This demand has special importance, above all when the majority of mobilizations have been raised against a handful of abusive professors.

For a genuinely free public education, so that education is not a privilege of the few, but rather a truly guaranteed right for the people, so that all the demands won by the student movement be attainable for the country’s poorest.

And always to safeguard the independence of the student movement, so that education not be subject to the interests of the current government nor to the Old State, together with seeking unity with the poorest masses.

For the student movement to achieve the reclaiming of these demands can only be done by carrying out ideological struggle in the middle of the current struggles, aimed at leading them and snatching them away from the influence of opportunism and imperialism, that is to say, driving them forward with a class struggle line. It is in this way that important jumps have been made in the politicization and organization of the masses. It is in this way that we will advance toward a class struggle student movement.