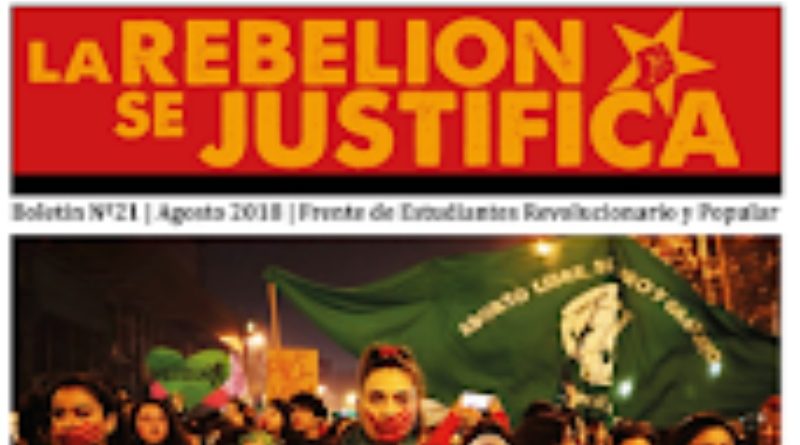 In recent months, we have been witnesses of various events which express the crisis of bureaucratic capitalism, which, in its aggravation, shows more evidently the essence of the Old State of Chile. This crisis, framed within the general crisis of imperialism on a world level, strikes out strongly against the people, the oppressed classes of our country, and forcefully disposes with combative protest and popular organization.
We refer, for example, to the closing of the plant of the sugar firm Iansa in Linares, which will impact more than 2,000 workers who are directly or indirectly linked to this production, whether as suppliers of its sugar beets or as workers of the plant itself.
To understand what is happening here, one must observe the international situation, the principal characteristic of imperialism which is the existence of dominant countries (imperialists) and dominated ones (semicolonies), in which the first do as they like with the economies of the semicolonies for their own benefit. In the case of the closing of the Iansa plant, this is relevant because it was because of a dictate of the World Trade Organization, as part of an imperialist plan which promotes the enrichment of monopoly capital and shrinks the national economy and its development ever more, which the Old State in Chile demonstrates.
But, being the poorest and most affected, this closing generated indignation, which, organized, developed into popular protest, and the workers of the Linares plant have fought in an exemplary way.
We see another example in the millionaire investment project of the foresting firm Arauco, which includes the modernization and expansion of the Arauco Plant of the Biobío region ($2.5 million), the construction of a panel factory in the U.S. ($400 million) and the construction of “Textile Pulp” in Valdivia ($190 million). These massive investment projects into one of the biggest monopoly enterprises in Chile, add up to a total of more than $3 billion, 3 billion dollars of which not a cent will trickle down to the poorest masses of the countryside and the city.
An investment project so giant and abhorrent can only realistically be assured by making use of the method par excellence of reaction: repression or a “heavy hand.”
By means of the well-known “Jungle Command,” the spinal column of this Old State has taken action. In the last month it has carried out various raids on Mapuche communities in resistance, with detentions even in the presence of small children, looking to beat down the struggle for the recuperation of lands, lands which today are in the hands of Arauco and other businesses which only leave the people with crumbs and misery, just like it will be with these new investment projects, where the riches will not be felt by the local people.
Along with that, we have the confirmation of the conviction of the Trangol brothers, Mapuche political prisoners of the Iglesias case, who will have to spend more than 10 years incarcerated unjustly, along with the case against environmental activists in Valparaíso, who are accused of burning a government building on May 21, 2016.
On top of that, all while this escalating repression is happening, the Supreme Court freed 7 criminals, authors of the worst and most abhorrent crimes against the people during the fascist military regime.
In our country we can continue finding examples of how imperialism, the big bourgeoisie and landowners act, with their instrument of oppression, the old bureaucratic-landowning State, to discharge their crisis on the people, so that the poor pay, as we see with the Statute of Youth Slavery.
That is how the character of the old State reveals itself. Against it we should always organize and struggle to pull off conquests, demanding the rights of the people, but understanding that for all the promises it makes, it is incapable of truly meeting social tasks in benefit of the people, of really attending to their needs. It can never do these things because of its exploiter and oppressor class character. What is won is won through iron struggle, mass struggle.
Our outlook is thus for a New Democratic Revolution, to get rid of this Old State and construct one which guarantees the rights of the people and meets their needs, their right to health and work.
Those who call themselves revolutionary should fight to destroy the mountains that oppress us: imperialism, bureaucratic capitalism, and semi-feudalism, developing along the path of new democratic revolution!