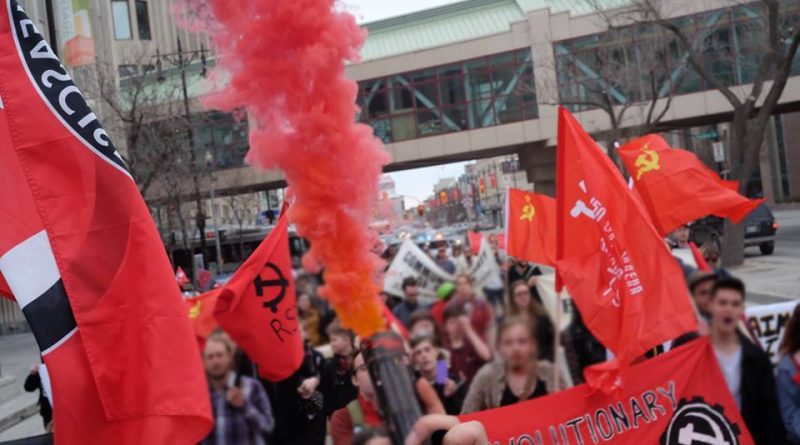 This year has been full of major events for the MER-RSM and for the revolutionary movement in Canada. We have held our 6th Pan-Canadian Congress in February, where delegates from 14 sections across the country came together to decide on the course of our organization and share organizing experience. The Congress has elected an almost entirely new Pan-Canadian Coordinating Committee to guide the work of our organization and serves as a good indication of the growth and qualitative improvement that we are experiencing.

As the Canadian state was celebrating 150 years since its founding, many anti-colonial movements and organizers have shown their opposition to this blatant celebration of settler colonialism, capitalism and imperialism. The MER-RSM has joined the FuckThe150th campaign initiated by the Revolutionary Communist Party to protest these celebrations on the ground and to counter the messages spread by the Canadian state on social media.

More MER-RSM sections than ever before have joined in the International Workers’ Day (or May Day) events across the country by taking part and organizing marches, public talks and social events. We have also taken part in celebrations of the 100th anniversary of the Great October Revolution, a very important historic event to commemorate and learn from.

This year has also been marked by the rise of the extreme right organizations, which have been trying to take to the streets in a series of coordinated, country-wide efforts. Most of these attempts have been shut down or constrained to tiny perimeter by anti-racist and anti-fascist organizers that have been coming out to oppose them. Members of the MER-RSM have joined the efforts to stop the extreme right from taking root on campuses and anywhere they try to rear their ugly head.

It has never been a secret that the state and its running dogs – the police, try to suppress any radical organizing that challenges it and aims to change the society. As the quality of work of revolutionary organizations across the country has been on the rise, police repression followed. This has been particularly evident in Sudbury, Quebec City, and Ottawa. Despite that, we are committed to continuing to build solidarity against state repression and against the rising threat of fascism.

Many new comrades have joined our organization this year, with several new sections being created: Brandon (Manitoba), Guelph (Ontario), Waterloo (Ontario), Windsor (Ontario). Other sections have seen growth of membership and the scope of work. Regrettably, we have seen the departure of the Montreal section of the MER-RSM due to serious political disagreements. However, we have restarted our organizing in Montreal, namely at Concordia university, and we expect to expand our organizing there in the coming year.

We have big plans in the coming year! We are going to distribute our first-ever publication, Classmates, in January. Comrades in Ottawa, Hamilton, Peterborough, Saskatoon, Toronto and Winnipeg are going to be engaged in campaigns to create or improve General Assemblies on their campuses, which will become a platform where political struggles get brought out in the open and a tool to exert direct democratic control over student unions. As the experience of campuses with functional General Assemblies demonstrates, it is one of the best tools for advancing radical politics; building the culture of resistance to capitalism, colonialism, imperialism, patriarchy and other reactionary systems of oppression; and challenging the bourgeois notion of representative democracy, where the small minority detached from the needs of the majority holds most of the decision-making power. Lastly, we will hold Regional Conferences where comrades will come together to meet each other, share organizing experience, and come up with ideas and proposals for the time between then and the 2019 Pan-Canadian Congress.

We are the largest and the most active anti-capitalist student movement in Canada. We remain committed to organizing in struggle against capitalism, colonialism, racism, patriarchy, ableism and other forms of oppression both on and off campuses.

Now is a good time to join our movement!

Get in touch with us: [email protected]

Coordinating Committee of the MER-RSM