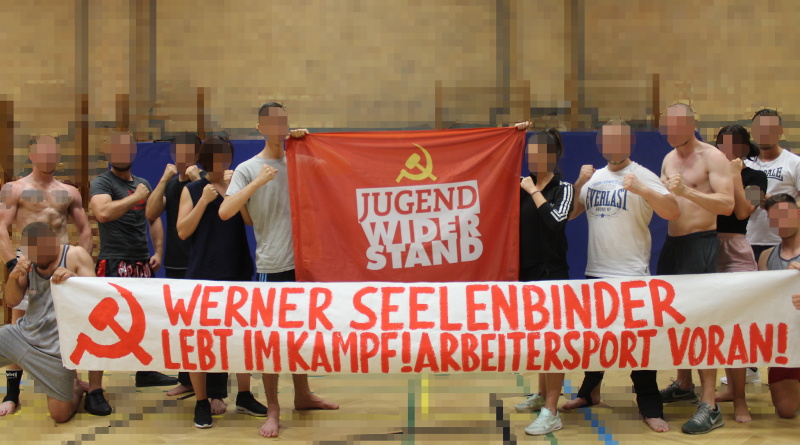 Today on his birthday we as German revolutionaries and anti-fascists commemorated him as one of our idols and heroes. He definetly was one from our ranks. One of the comrades we share the district, the hate, the dreams, the class and the sports with: Werner Seelenbinder.

Werner was a true son of our class. He was born on August 2. 1904. The mother moved with him from Stettin to Berlin-Friedrichshain, and early on it was the extreme poverty which characterized the life of the Seelenbinders. Bitter poverty on the one hand and hard work on the other. Werner worked as an assistant chauffeur, hotel page and as a house worker in a factory to bring money home to his family. Only much later he did receive a permanent position as a transport worker in an AEG company. 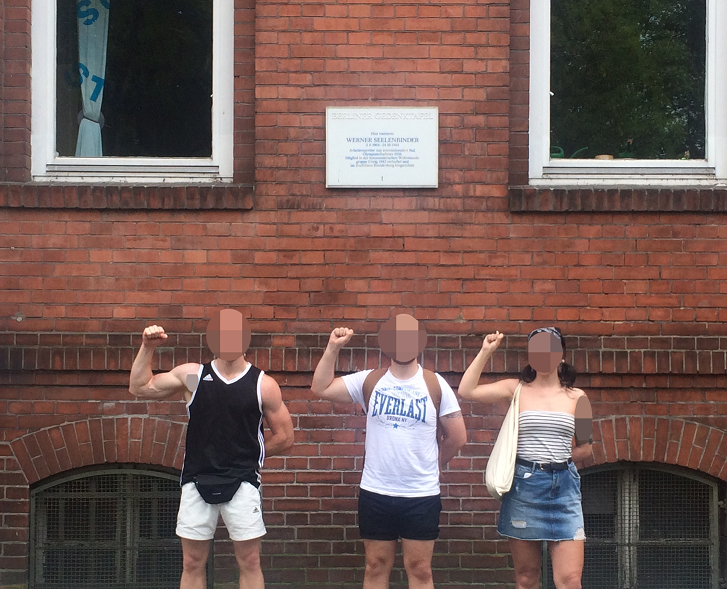 It was this life that brought him into our ranks. He studied Marx and Lenin and followed the order of the class and joined the communists. His friends described him as fair, modest, willing to take risks and endowed with an irrepressible sense of justice. Not only politically but also humanly and in its entirety he was a revolutionary through and through.

Werner found the balance to the duties of his life in the field of athlethic sport, weightlifting and wrestling. He began training in 1917 at the workes-athletes-club “Eiche”, an association for wrestling and weight lifting. He concentrated on the wrestling and started for the sports club “Berolina” here in our neighborhood Berlin-Neukölln.

Let’s talk about what kind of sportsman Werner was to get a picture of what kind of human he was. He became famous for how he was fighting, for his rough somewhat impetuous and powerful way. He fought the Greek / Roman style of wrestling which means fighting by exclusively attacking the enemy above the belt line, and not giving the victory by points, but by the school victory: the total defeat of the opponent,with both shoulders on the mat. His special move was the hip throw, which the athletes of the Soviet Union from now on awesomely called the “Seelenbinder”. 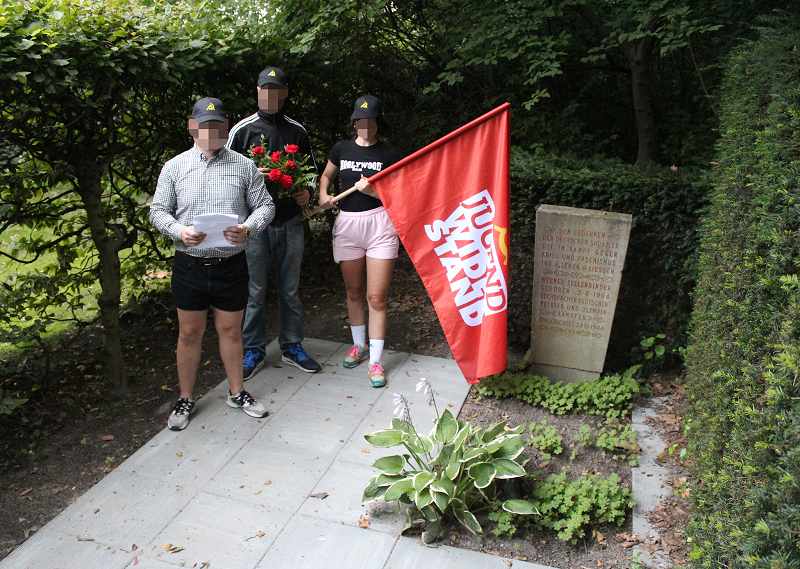 Despite these outstanding successes he rejects a bourgeois sports career. This would have changes hid lifestyle to a lifestyle that comes close to the one of bourgeois celebritys nowadays. He rejected the prospect on 30 DM per evening. At that time you could access a prolific lifestyle with this payment. The modest proletarian would rather be struggling with the least opportunities through the global economic crisis and was often unemployed and always had barely enough money for his training. He chose the straight way of living. Instead of the career Seelenbinder became a member of the KPD. Not only on paper but with all his heart and with firm determination even in the blackest times of political persecution after Hitler’s nomination as chancellor. It was mainly propaganda activities like making leaftlets and leaflet campaigns that were part of Seelenbinder’s political work. He also used sports-related trips to other countries to make contacts and to pass on and receive propaganda material.

In 1933 during the terrorist attacks of the SA and the handover of the Weimar Republic to the NSDAP fascists he decides to stand publicly for his conviction: In the hall “Saalbau Friedrichshain” he won the German title. Werner Seelenbinders didn’t rose his arm when the national anthem sounds at the award ceremony. For the rulers a massive provocation – the public denial of saluting Hitler. A sign of a true and open proletarian attitude.

Three weeks later the regime took revenge. The Gestapo interrogated him, deported him to the Columbiadamm concentration camp and forbade him the fighting. Friends from the wrestling club are committed about his release and are successful. He receives his wrestling permit back because of his talent: the German Reich needs a wrestler for the upcoming Olympia at home. No one else in his combat class is as promising as Werner Seelenbinder. 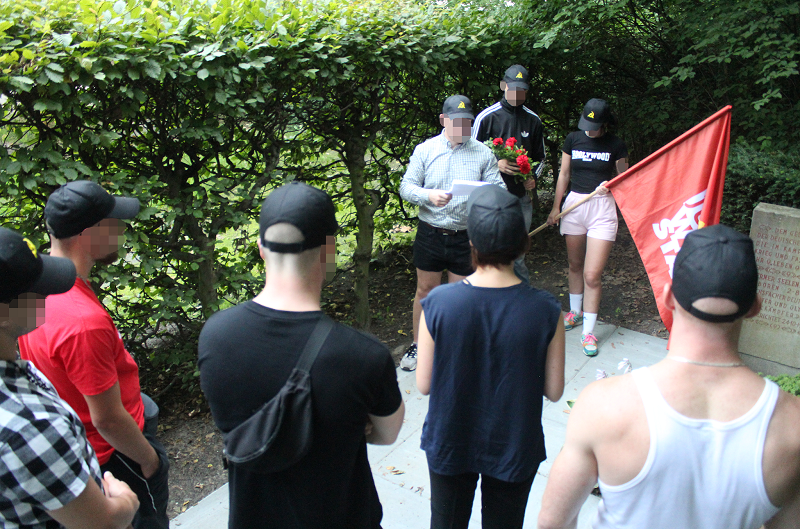 Seelenbinder is planning another major action: he gives the adapted system believer to be admitted for the Olympics. He is sure to go for gold because this time he is not only full of sporting zeal but especially full of antifascist resistance. In the case of victory, he was going to make a small speech in the Olympiastadion to attack and undermine the Nazi regime internationally as the vile fascist terrorist state it was. All the attempts of the bourgeois historians to make Seelenbinder a coward who had fear of martyrdom failed because of this fact: He was aware of the price he had to pay for a speech before such an audience and he was willing to pay this price.

It was the 1 August 1936th. He had worked hard for month and improved his tactics. Because at Olympia the point system which he didnt like determined the victory not as usual in workers wrestling the win by fall. Shortly before the start of the tournament close comrades of Seelenbinder were arrested so he must have had the fear of unmasking from that point on. The pressure was immense. The first fight against the Latvian fighter Bietags had been lost. Seelenbinder fights his way back into the tournament with two victories but the Swedish fighter Cadier was a too hard enemy. The German loses and ends up only making the fourth place. The winners podium and a speech are denied forever. It was the pressure plus the point system and the tension. You can not blame him. He gave everything.

But even after great defeats life and most importantly the struggle continues: he was German champion three times and he remains a member of a KPD cell which was the group around the comrade Robert Uhrig. This group built a nationwide conspiratorial information network between resistance groups, founded an underground newspaper, carried out sabotage campaigns, collected information on the economic and military situation of the German Reich to create a counterpublicity and as an espionage to the Soviet Union. When he invited his comrade Alfred Kowalke to his house the Gestapo who had been spying on him for months struck. The entire resistance group was smashed and Seelenbinder landed in jail. He spent two and a half years in various penitentiaries and prisons until the Nazis finally murdered him by chopping his head of his neck. 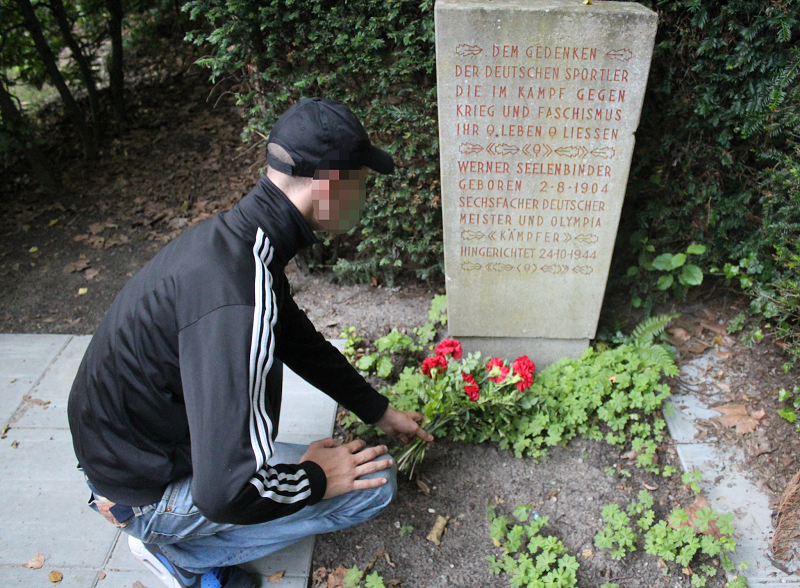 We want to draw some lessons from his life and clarify some things to make his memory a weapon in combat:

1. Werner Seelenbinder was not the harmless idol that the senate of Berlin would like to present him as. Werner Seelenbinder was a militant and a communist. He carried his life in the fingertips always willing to risk it to make sure others live in freedom. He was not a coward nor a “harmless good-believing helpful idiot” which was exploited by the communists. We condemn the attempt of the bourgeoisie to take our martyrs and transform them into harmless individuals and tear them out of the context of class struggle.

2. Being determines consciousness. The hours in the ring the experiences of constantly challenging the weight of the opponent under the mobilization of all available forces and constantly disciplining and challenging at the daily practice have built the strong and combative spirit of Werner Seelenbinder. Sport is part of our ideology and part of the nature of the proletarian class. As young revolutionaries we reject the degeneration of imperialism and hate the hedonistic lifestyle that is preached by the bourgeois media. We do sports and train our bodies and minds to weapons that will crush the enemy and serve the people. Against isolation and bourgeois individualism we have the collective spirit of proletarian sports where everyone respects and supports everyone else and is always fair and comradely towards eachother.

We conclude with Werner Seelenbinder’s last words a moving quotation from his farewell letter:

“Comrades! Soon I will no longer be among the living. I have to pay my struggle for peace and socialism with my life. I am not afraid of the fascist hangman but I am sad that I can not witness the collapse of fascism and the victory of socialism in Germany. My wish to be able to carry the red flag through Berlin remains unfulfilled but the comrades who take my place will equally proudly bear the red banner of freedom. Comrades let me live on in your hearts! “

Fight and do sports in the spirit Werner Seelenbinder!
All the best for your 113th birthday comrade the memory of your life fills us with pride and reverence!