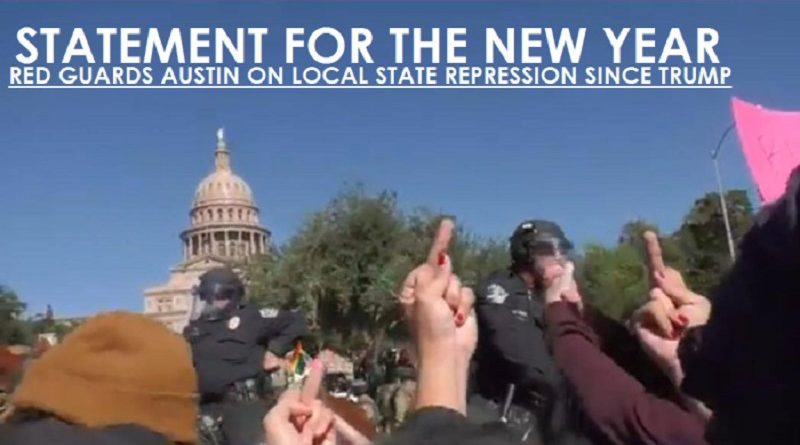 Warm greetings and happy new year to our comrades across the globe, to our supporters here, and to all fellow travelers and anti-fascists!

Since just before the elections state repression on activists in Austin has been increasing. Now at least two local comrades have received unwarranted visits from the FBI, neither of these comrades spoke to the pigs and it was not made clear to us by our supporters what the pigs were after. We must live by a simple policy- I saw nothing, I heard nothing, and I will say nothing! In the political climate where right wing and fascist populism continues to spread like a contagion and on the eve of Trumps inauguration we, more than ever, must adopt firm principles of security culture. Already we have seen the state go to extreme measures to attack and attempt to frame our comrades.

During the first wave of anti-Trump protests, Texas Department of Public Safety officers (brown shirts) arrested over ten people on bullshit charges, they added and removed street signs to tow cars belonging to activists and then intentionally lost them in their databases (losing entire cars still not returned) while fees continued to accumulate. The State Pigs battered one comrade and broke his neck while trying to frame him for assault with a deadly weapon, a charge so far-fetched not even the court would touch it. As mentioned in other statements their goal was to eliminate a revolutionary leader among the people. He was denied medical attention in the cities dungeon where his injuries could have killed or paralyzed him for life; it was only due to the courageous efforts of supporters and the people that this comrade is alive and recovering today. Five other comrades were charged with intervening in police matters (saving the life of their comrade from kill happy pigs). Some of these comrades face trumped up and false charges of assaulting an officer which in Texas is a serious charge. State Pigs did not stop at making arrests and trying to kill activists they proceeded to provide the media (including fascist media like Breitbart, Infowars etc.) with detailed list and photos of the Red anti-fascists who were arrested. Falsely reporting that all who were arrested were Red Guards, this resulted in the pigs intentionally misgendering trans prisoners during a hospital bedside illegal interrogation. This fascist relationship between the armed goons of the state and those tasked with reproducing the ideology of it becomes crystal clear as the media is the liaison between the fascists in uniform and those out of uniform. As a result of this legal doxxing our activists and supports have been on high-alert and instructed to be prepared to defend themselves against hate crimes and fascist attacks, as always, by any means necessary. We must pull out all stops and continue to raise money for the legal and political defense of these comrades.

The state brought out its brown shirts again on November 19th to protect just over a dozen fascists from around 1,000 anti-fascists. Videos can be seen of hardcore neo-Nazis crying for the state pigs to provide them with a safe-space—the pigs obliged by bringing over 150 riot cops to escort the trembling and scared neo-Nazis back to their vehicles and out of town. While this made our message loud and clear in Austin, the very same DPS brown shirt pigs were seen a few weeks later protecting neo-Nazi Richard Spencer at Texas A&M university in College Station where they made arrests and gave one comrade a concussion after hitting her in the face with a rifle butt. Again anti-fascists were fearless in confronting the enemy.

It comes as no shock or surprise that the local and state police along with the FBI have been knocking on doors in the past few weeks to try and scare or intimidate activists, impeding their ability to organize. At exactly the same time opportunists have chosen this moment to launch character attacks—spreading rumor, lies, and innuendo in classical Trotskyite fashion. Remember there is not a ship that sails without rats, rats that make their presence felt the moment things get tough, we can and must weather this. As the state hunts down, batters, and frames revolutionaries these rats are eager to do the job of discrediting from within the parameters of the “communist movement”. This is called pig-work and it is carried out by agents and useful-idiots alike. It is not acceptable in any way, shape, or form regardless of one’s intention. Real community organizers and our supporters are battling the system to stay alive, stay free, and most importantly to resist—we fight tooth and nail to build the communist party as visualized by Lenin and Mao.

There is nothing less desirable to and more hated by the state and powers-that-be than a Maoist Communist Party because unlike other so-called parties it exists for one reason—the violent overthrow of the existing order. This means  armed struggle, the establishment of the dictatorship of the proletariat, and the continuation of revolution in the period of socialism. This type of party is iron clad and our party building organizations must also be iron clad. We must continue to build, to unite with all who can be united with, and expose the opportunists and barge rats for the Trots they are. We stand for the establishment of anti-fascist self-defense units which must be armed when and where possible. We stand for the building of the party and its construction of a people’s army and a united front between all those oppressed and exploited by the capitalist-imperialist system, by all those who hate fascism and love liberation. If this has earned us the enmity of the increasingly fascist state we must accept our role as rebels and proceed accordingly.

We call upon all true friends to pay close attention to these developments, to slam the door in the face of any pig who comes knocking, and to organize like never before against the tide of death that is fascism. We strongly encourage all comrades to not give into liberal tendencies which now more than ever can be in service to the pig system. Counter intelligence programs will make a comeback and disinformation is their currency. We must use the science of Marxism Leninism Maoism to cut through the fog—this means holding fast to our principles and improving our style of work. We are committed to continuing the fight in the year 2017 as we have for the past two years, without mincing words or concealing our views! If you are in Austin and support the work of RGA we press upon you the need to get organized, we encourage people to join one of the local progressive, militant, or revolutionary organizations who as we write this are fighting hard for a better world, these include; Revolutionary Alliance of Trans People Against Capitalism, Serve The People, Defend our Hoodz/Defiende el Barrio, the Revolutionary Student Front, and the Palestine Solidarity Committee. If you are in San Marcos we encourage you to link up with the Revolutionary Front San Marcos.