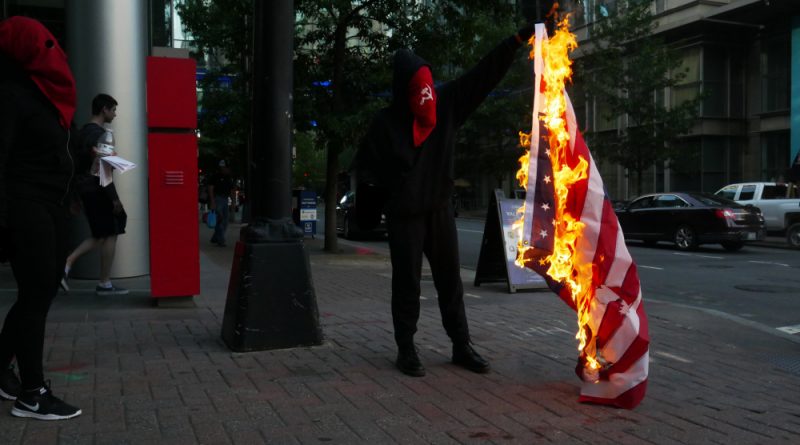 In February of 2018 we called on Charlotte to make May Day a revolutionary communist day of internationalism and rebellion. In the uphill battle to make Maoism a material force among the masses, we have succeeded in initiating the first steps towards revolution. We can classify May 1st, 2018 as a victory for the revolutionary forces in Charlotte. This action spit in the face of decades of liberalism in this city.

We do not seek “left unity”–we seek the highest level of unity with the masses. This year we weren’t interested in building up May Day with groups who seek to take the rebellious history out of May Day.

To paraphrase La Gauche Prolétarienne, we are for partisan action and against mass inaction. Many on the “left” in Charlotte see no point in acting unless the numbers are large. While we do want large numbers of the working class to take up proletarian revolution, what we don’t want is the desire for large numbers to paralyze us from taking necessary action. The left in Charlotte is toothless, and has that way been for years now.

A protest on the enemies’ terms is a parade, nothing more. The NGO left, just like the fascists and the state, fear rebellion. Rebellion and destruction of the existing order would mean the abdication of their vaunted positions of royalty a top the kingdom of social capital they have reigned over for so long. We work in principled unity with organizations who are truly fighting for a better world, we send a huge thank you to the comrades over at Libre, Antifascists Charlotte, and Serve the People – Charlotte, we are eternally grateful for your support.

As outreach for this march, we passed out flyers in multiple proletarian neighborhoods, stuck up flyers, and did a fair share of online outreach. Though we learned the masses of people don’t know much about May Day, the passing out of literature in proletarian neighborhoods without follow up was a mistake. The mistake comes from a left deviation in our mass work, in which we believed that if we told people about why May Day is in their interests that alone will lead to the masses to spontaneously coming out. What this formula doesn’t account for is the fact that workers are still not conscious as a class in the necessity of militant action. That part takes awhile to build up. Our energy should have gone equally into steeling our forces under the line we took for May Day, while also doing outreach regularly among the working class. Educating on May Day is a crucial step but teaching the necessity of militant action, through practice and theory, is even more crucial if we want to lead the working class. What we will do next time is communicate our message by referencing our own actions–like this one–which prove to the masses that we are militant and will not be overrun. The people want action. They see talk without enough action and they don’t believe it—we don’t blame them.

Past “May Day” in Charlotte

Among Charlotte “organizing” folklore was May Day 2017, where 8,000 people marched through the streets of downtown Charlotte. This gets thrown in the face of revolutionaries who, with a materialist perspective, see that 8,000 people in the streets protesting is positive but we ask the question: where are those 8,000 people now? Who is engaging with those workers today? Where is the organization that lead that march now? The NGOs fail to analyze concrete reality from concrete conditions. They would have you believe that this march disrupted so much that Charlotte will never be the same when it’s just the opposite. Charlotte remains the same– the working class is still toiling and exploited. Many among the working class and its allies, especially oppressed nations, are fearful of being deported or murdered by the police.

Many of the sideline critics of Revolutionary May Day 2018 forget that May Day 2017 was a culmination of a national day of action known as a “Day without immigrants.” That doesn’t take away from impressiveness of the sheer numbers. Yet it can’t be forgotten that the anti-war protests of the early 2000’s, the Women’s march, Black Lives Matter marches after the Ferguson uprising, were quantifiably substantial, but qualitatively suffered the same fate—sputtering out or funneled into the hands of the Democratic party. We are not mass protests, and we are against protesting for the sake of protesting.

Marx taught us that “revolutions are the locomotives of history” and the masses are coal which light the fire needed to run the engine of history. Therefore, there is the kernel of truth that mass action is needed to move history forward but to what end? If our class isn’t being galvanized to engage in mass action against capitalism-imperialism, then protests should be for what they are: necessary tactics but not inherently revolutionary.

However, our march did share a district similarity with the much-lauded march of 8,000, they both occurred in Downtown Charlotte. Downtown is the financial center of Charlotte headquarters of Bank of America and Duke Energy. Charlotte is the second largest banking center in the US–with that comes a huge influx of capital being stored for the exploiters. Bank of America holds the active capital for the business owners to the monopoly capitalists. Without banks acting as holders of capital there can be no ownership over the means of production. Capital is the land, factory, machinery and money needed to hire labor. As production cannot happen without capital, banks are among the main enemies of the people. So, we marched through the downtown that was built by the working class all funded by the banks Charlotte holds so dearly. We specifically assembled in downtown to say, “fuck you Bank of America”, “fuck you America” for its crimes against humanity. Both of those entities represent two of our main enemies, and the masses must know this clearly.

Communists have a duty to put into practice the principles we hold. When we say “fuck America” we back it the fuck up. We say it for the hundreds of years of exploitation, slavery, genocide and imperialist wars, therefore it was only fitting to burn the flag of terrorist number 1.
After taking the streets for about a block, our supporters stopped in front of Bank of America. This was across from the Omni on Trade and College. A moment of silence was held for Justin Carr, a Black man who was killed protesting during the Charlotte rebellion, and our supporters proceeded to pull out the flag of our oppressors. The pigs snatched the flag from our supporters, but those supporters ended up getting it back because of Johnson vs. Texas which says that burning the American flag is a right all Americans have. Our supporters then proceeded to burn the flag. The look of agony and disgust in the eyes of the pigs was beautiful. This was the highest point in the march–the energy was exciting, the pigs and patriots flustered, and our people were unified. The people recorded the action and some chanted with us for a bit.

Principally the pigs were our enemy throughout, but as soon as the march reached its climax—Sam Bethea, the local street preacher, came to harass us again. As he usually does, he stumbled into our crowd chanting “Jesus Saves” to detract from our action. In his actions he is attempting to show us why we are all misguided youth who need God’s light to receive our salvation.  Under “peaceful” conditions, he is a harmless street preacher who doesn’t spew hate or bigotry, but rather a person with a competing ideology attempting to usurp the need for any sort of action to end this misery. He is a blackhole, sucking the light and energy out of our marches. He has been louder, with a seemingly-unlimited amount of energy. He should have been kicked out of our presence and shut down. His chanting turned a section of the masses looking on in support of our march against us; he was able to frame us as misguided, petulant youth, while his two-word catchphrase was the actual salvation—and not communism. It was our march, and a plan of action must be taken to neutralize non-state enemies of the people. In essence, he is nothing more than an opportunist, and a snitch who in the past has gotten our comrades arrested.

As the march came to an end, Sam followed us until we got to our dispersal location—distracting us the entire way. We made it to the ending location, and as we let our guard down the pigs got the orders to arrest 3 of our supporters. The pigs blindsided them, slammed a comrade up against a wall, and tackled another one to the ground. The pigs clearly had an order called in to arrest our supporters, teach them a lesson, and end the protest. They don’t actually know or understand the law, and this can be used to our tactical advantage in the future. The main lesson we learned was that the pigs are the enemies of the people. They serve the exploiters, and brutalize working class people every day. So to them we say, “Fuck you and every other pig.” We will never fear their badges, their clubs, pepper spray or guns. For every one of us who gets captured by the state, two or three more of us will come forward, inspired by the action. We seized the moment, and the morale.

To the supporters who were arrested, we salute you. We salute your sacrifice. We work and fight to develop the courage to fight for liberation of all of humanity like you all do. Two of our supporters have been placed on suspension because of arrest and are losing income as we speak. This is the state’s ploy to stop future rebellion. They want to place huge physical, emotional and mental stress on them and their loved ones, so the idea of engaging in another militant action never crosses their mind. But as communists we are fearless, we won’t back down—we will take care of our own, to continue the fight through to the end!

Please consider donating to support these comrades for their sacrifices, send money via Google pay to: zayred64@gmail.com.

Despite our small numbers, this revolutionary May Day was a step in the absolutely correct direction. The planning of this action marked our independence, and a moving up from where we were before. Our supporters publicly bore the hammer and sickle for the first time in a direct action.

We flew high the red flag in solidarity with the Palestinian people who have been protesting for 6 weeks now to reclaim their stolen land. During that 6-week period over 44 people have been killed and 1,700 have been injured. We rebel in their honor. We fought for Ahed Tamimi who, as we speak, is sitting in the dungeons of the Israeli state. We fought for Janisha Fonville, Daquan Westbrook aka Donkey Cartel, Jonathan Ferrell, Lareko Williams, and Keith Lamont Scott all who have been murdered by the Charlotte Mecklenburg Police Department. We fought for all those who came from disaster or war-torn countries protected under “temporary protective status” and Deferred Action for Childhood Arrivals (DACA) who are under threat of deportation. We will continue the fight every day for all oppressed and exploited people who are suffering under capitalism-imperialism globally. We will not relent until our ideology—Marxism-Leninism-Maoism, principally Maoism—has been grasped by the masses worldwide.

The struggle is just beginning. We have a new task ahead of us: build up Red May Day 2019! With everything we have learned from this year’s action, we must push that momentum from the refreshing militancy of May Day 2018 into our plans for next year. May Day is our day, it is a day for our class. We must cherish it with celebration and righteous rebellion.

The masses scream out for revolution–heed their call!

Impose the red banner against all who attack it!