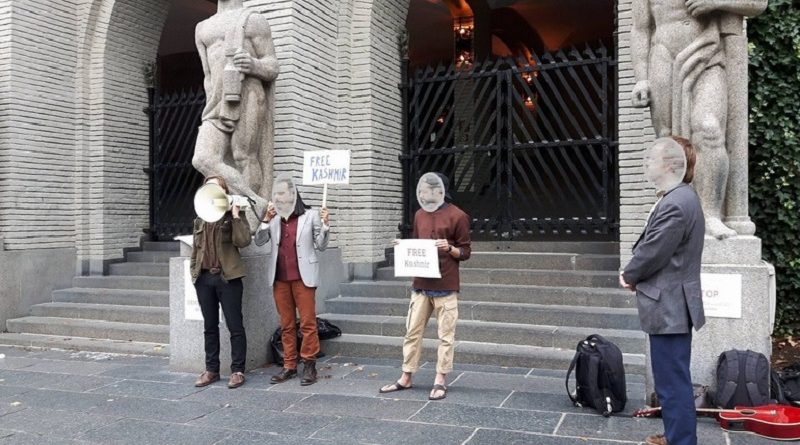 Tjen Folket participated on a demonstration in Bergen on the 10th of september against Indias occupation of Kashmir and the brutal action they have started to oppress the Kashmiri liberation struggle.

Friends, comrades, “The authorities have lost their faith in the people. They have decided to dissolve the people and point out a new people.”. This quote from Bertold Brecht is a very good description of todays situation in India. From Nagaland in the east to Kashmir in the north the Indiam state run so called anti-terror operations. Anti-terror, is a known term in our country too. It is characterized by fighter planes dropping bombs on unclear targets on other regions of the world. It is called imperialism despite how nice words they put on it. I Kashmir today the imperialist threat is much more direct, 700 00å military and paramilitary soldiers are deployed to hold people in fear and spread fatalism, the feeling that the power is undefeatable

But, occupation and oppression has always and will always lead to resistance. This is what we see now, and this is what we are here to lift forward today. While we stand here thousands of Kasmiris demonstrate against the states oppression, the curfew, terrorizing by local media, cenzorship of internet og generally violence against civilians. And unlike us these demonstrator are met with bullets. Even if they are bullets of a «non-lethal» character the people who have seen the results of this non-lethality knows how horrible it is. The Activist in Bergen support the Kashmiri peoples struggle for liberation.

The authorities in India show their desperation in Kashmir. Through widespread use of brutal violence againt the people they show they fear the people, fear the power that lies in the masses of people, fear the organizing and resistabce of the people. Our task here in Norway, on the other side of the earth is to make people aware of what is happening. The Indian state tries to hide all news from this area that does help their cause. Most people of the world dont even know that the buggest conflict in the world today is fought within the best friend of the western powers in Asia, what we learned in school was the biggest democracy in the world.

Where is democracy for people in Kashmir who get shot at for saying their meaning? Where is the democracy for people arrested without charge? Or those who dissapear after being put on custody? The state against the people. The newspapers dont write about that, the news dont talk about it. Its a hidden conflict. Ot is censored om social media like facebook. Post showing the brutaliity of the Indian occupation of India are removed. Strong Kashmiri voices are censored and their posts condemning the Indian occupations violence is removed.

This is the biggest imperialist conflict in our time. The Indian state besieges its own populatoon in massive military operations in large parts of the country. They are doing a crusade against poor people and minorities. They order torture and murder on independence activists and people supporting seperatist movements. The Indian state shows clear fascist tendencies.

Our comrades in India, our equals are fighting. They are fighting in the streets, the universities and in the jungle. They fight with pens, songs and rifles. And most of all they figh for their right to call themselves the people, and the people cant be changed out.