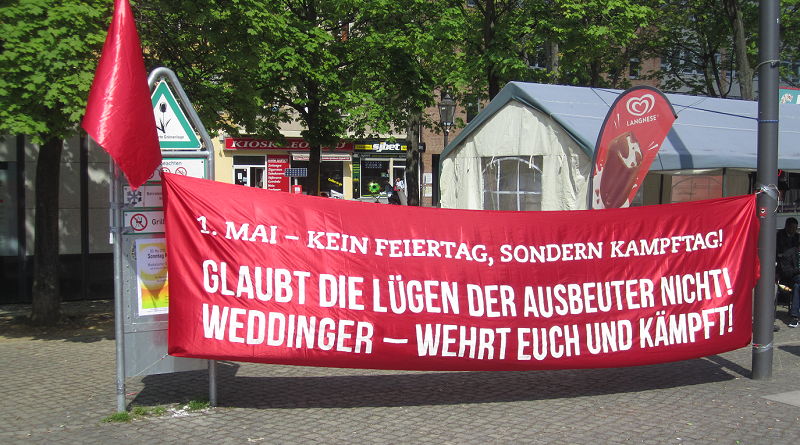 Exploitation in the job, having a family to feed, rents that are too high, difficulties with the language, schools too difficult – so is the reality of many people here in Wedding. Berlin-Wedding one of the oldest and most traditional districts of Berlin. One of the last districts where the working population lives and markets and normal shops dominate the street scene instead of hip cafes, artists galleries and bio supermarkets. A high proportion of migrants and a relatively low standard of living as well as (yet) affordable rents and a functioning infrastructure are characteristic in Wedding. Many families have lived here for decades but living here is becoming more and more expensive. The plan is to transform the Wedding into a “hip” part of Berlin – more and more apartments and whole houses are being renovated and are becoming a “alive living space in Berlin-Mitte” for significantly more money to be rented by rich students & other yuppies. That means in Wedding there will be less and fewer workers and migrants neighborhoods, people will be expelled into the outer districts and have to give up their familiar environment. Most of the people in Wedding aren’t earning enough to afford the rising rents.

We have become accustomed to see such things as normal. The many hours of overtime, the bad payment, the double burden in the job and in the household and the lack of perspectives that we have to face – it is difficult, but not to change. Or you just have to do a lot of extra effort work hard and send the children to study so that “they will bring it to something oneday”. What is often overlooked: This is no coincidence.

Most of us work for a large or a small, a private or a governmental enterprise. And: The first and most important goal of a company is to increase its profit. The more an employer saves on the labor force the higher is his profit. And if the labor force just gets so much that it is satisfied enough not to strike or otherwise to rebel against the employer then everyone is satisfied the company and society works and the money flows into the pockets of the bosses.

The true face of their democracy…

What we see as normal today and what is sold to us as “achievements of democracy” – for examplesocial insurance, the 8-hour day, disability benefits, etc. – was won by the workers worldwide with great courage and great suffering. But you just don’t learn anything about it in history lessons and you don’t see it in the media.

Thus the 1st of May has its history written by our predecessors, the workers at the end of the 19th century, for us. At that time hundreds of thousands of workers in Chicago struggled to reduce the usual 12-hour day to 8 hours a day. The police tried to forcibly dissolve the assemblies of the strikers and began to shoot into the crowd. Many people were shot some were arrested and sentenced to death. The international workers’ movement picked up the date of these events and chose it as the international day of labour the working class.

Because of its social composition Wedding and its inhabitants have always had this fighting spirit which we want to remember today. In times of Nazi terror many resistance fighters lived in the streets and the houses that we inhabit today. Most of them were communists and were persecuted hard – very simple workers, teachers, athletes and students have fought for a better future and often given their lives for the generations to come. At the Blood Mai in 1929, where on a May Day demonstration the police shot randomly into the crowd and attacked dwelling-houses with machine guns. The government imposed a state of emergency over Berlin. During that time Wedding showed its true colors: Red flags were hung from innumerable windows despite all political persecution and oppression. This was no coincidence: the Communist Party of Germany which represented the interests of the working population was the strongest party in Wedding (in 1928, with 40.2% and a little later even with 47%). Today there is about 40% of Weddings population that does not vote. And this is justified! Since the prohibition of the Communist Party and the destruction of the workers’ movement in Germany we are only rasped by the rulers bute also more (and not so obviously) exploited and suppressed!

You can not live like a piece of cattle forever!

Do not believe the lies that are spread by the BILD, the BZ, and other media, that lies that politicians tell you every day. Do not accept the destruction of your neighborhoods, don’t let them draw the money out of your pocket, and enriching themselves with what our hands create. Provide resistance! The 1st of May is more than just a holiday in the week. He is still the day of the demonstration of the strength of all who suffer under capitalism. Here in Germany and all around the world.