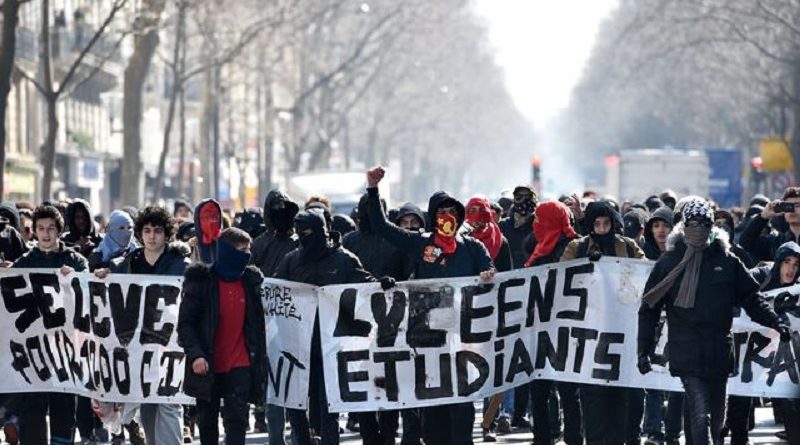 On March 9, we were 500,000 strong on the streets, mobilized against the PS/MEDEF government’s project of labor reform.

Today, the movement has reached a new milestone by mobilizing 150,000 students and high school students. Many high schools were blockaded and we witnessed parades of youth on the offensive, victims of the reactionary policies, who decided to take their affairs back into their own hands and not suffer anymore.

In many cities such as Paris, Lyon, Marseilles, Rennes, Nantes, Strasbourg, Rouen and Clermont-Ferrand, the just revolt of the youth was met with police repression. Demonstrations were attacked by the cops and there was at least 23 arrests. Once again the message of the government, and therefore of the bosses, is clear: “if you dare to raise your head, wait for our dogs, the police, to shut your mouths!”.

Revolts and repression also trace a line within the movement between the rightest legalistic elements whose security squads serve as the extensions of the cops by framing the demonstration as “preventing excesses”, and the revolutionary elements who again are shouting that we are right to rebel, thus placing themselves alongside with the working class youth who have nothing to lose but their chains.

Of course, our Party understands, approves and participates in the youth revolt. For us, there are no rioters, only men and women struggling, often going further in the revolt than what is acceptable by the reformist directions of student and high school unions.

We should not let the movement be divided between “good demonstrators” who are legitimized because they don’t break ranks, and “bad rioters” who let their legitimate anger and rejection to this rotten system and its institutions explode. It is clear that we won’t under any circumstances respect the symbols of class oppression that oppress the proletarian youth, such as the police, courts, but also national education. The high school students, who, like in Clermont, went to disrupt the university were right to do so. It is a class reaction and it is a just reaction of working class youth for whom school oppression is only the preamble to the oppression of the bosses of tomorrow. We affirm our solidarity with all those arrested.

For us, the mobilization of the youth, and especially of the youth of working-class neighborhoods, is an important step in building a balance of power capable of pushing the government back. Yet, the youth alone will not be able to win. It is the working class, by its position in the production process, which remains the determining element of this movement. Only the working class truly has the power to blockade the economy and thus directly damage capital.

We must not allow our struggles to be divided into, from one side, university and high school student demonstrations, and on the other, worker demonstrations. If we want to win, we must fight united, high school students, students and workers. Together we are a force that has already pushed the reformist leadership of the unions to rethink their timid agenda. Tomorrow we will be a force, united at the base and in action, capable of paralyzing the country, blocking the economy, occupying places of production, life and study, imposing a general strike that will be able to force the bosses and to their watchdogs to kneel.

WITHDRAWAL OF THE PROJECT OF PS/MEDEF REFORM!

SOLIDARITY WITH THOSE ARRESTED ON MARCH 17!

LONG LIVE THE UNITY AT THE BASE FOR THE BLOCKADE OF THE ECONOMY!