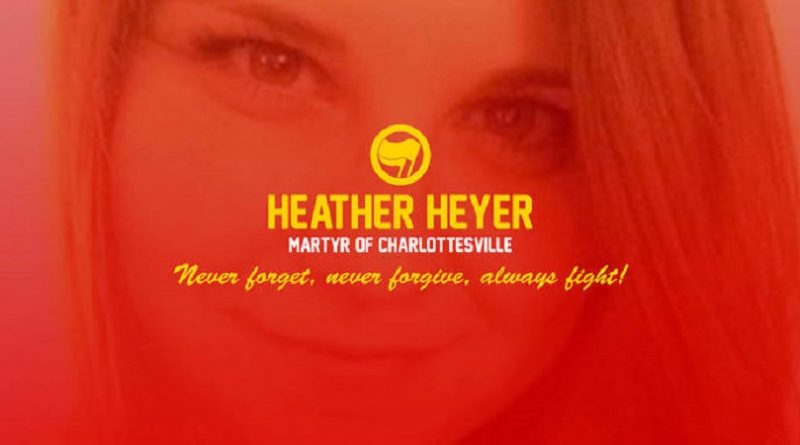 Heather Heyer, an antifascist, was murdered when a fascist drove his car directly into an antifascist demonstration on August 12. Many others were injured.

The antifascists were protesting “Unite the Right”, a gathering of Nazis, anti-Semities, KKK members, and so-called “alt-right” internet activists. These Nazis were more than prepared for violence when they arrived. Many were wielding clubs and shields and wearing helmets. A few brought guns.

The shields were decorated with well-known fascist symbols, like the axe and a bundle of rods (known as a fasces) as used by Mussolini, as well as several runes and war crosses often used by Nazis throughout history.

During interviews, the fascists said they were inspired by the examples of Golden Dawn in Greece and “Nordfront” in Sweden. One also reported that they wished to build movements and tactics through activism—the way antifascists and the “left-wing” do.

We often see people making fun of Nazi shields, their rhetoric, and their interests in the outdoors and fitness. We have seen people refer to their activities as “LARPing” (Live Action Role Playing). They are depicted as pathetic and childish. As a result, people will often laugh at the idea of preparing to fight them.

But nobody is laughing in Charlottesville.

When it comes to Swedish antifascism, it’s best to swallow your laughter, when you consider the fact that Nazis have killed over twenty people in the last twenty years in Sweden alone. Or when Nazis carry out attacks and bombings and show up to camp with automatic weapons—all while they enjoy the protection of the police while they recruit activists in the streets.

It is not only idiotic to laugh in these times—it is also dangerous.

It is equally idiotic and dangerous to give Nazis and the police a monopoly on violence. Doing so allows yourself and others around you to become the next victims and prevents you from protecting yourself, your friends, or your organization. We know of antiracist groups who hold this nonviolent political line. They condemn confrontational antifascism. They either condemn or laugh at attempts to prepare for self-defense. Some claim that because Nazis want violence, antifascists are duty-bound to withdraw from it, cost what it may.

The consequence is that antifascists are unprepared for demonstrations and activities where they may be attacked by fascists. It forces antifascists to depend entirely on the police to help them when there is trouble. It spreads the lie that fascists cannot be physically defeated. This could not be further from the truth—fascists are almost always outnumbered and beaten in any given conflict or war. The only reason Nazis have been allowed to grow in Sweden and shuttle in hundreds of demonstrators is the massive support they have from the police, who volunteer as bodyguards for Hitlerites and brutally beat antifascists who try to stop this insanity.

It is reasonable for antifascists to train, organize and create a combative culture. The technical details of this work are not as important as fostering a mentality of fearlessness and unity—one where we can meet fascist violence with the necessary means.

The fight against fascism operates on several fronts. There is no single method that solves everything. But to throw away methods on some abstract principle, to take tools out of our toolbox, or to ignore the question of antifascist violence—this is a recipe for certain disaster.

Our political line, our worldview, is Marxism-Leninism-Maoism. A central element of this is agitation for red power. Red power demands that the power of the people to defend themselves must be built up and used against fascist reaction and fascist terrorism. It means that those groups of people who are persecuted by Nazis should defend themselves, strike back, and destroy the fascists. Without such a power, the people have no way of defending themselves.

We want to be clear about what we mean by groups of people who are persecuted, or those who are at risk of persecution. Both historically and today, these groups of people are particularly vulnerable to fascist threats:

With their policy of sharpening contradictions by repressing them and their policies of war and expansion, Nazis become a threat to the entire nation. Just look at the destruction wrought by Hitlerism in Germany and all of Europe.

People must take this as a call to action—a call to take a stand for oneself, a stand for your loved ones, and a stand for a disciplined and militant antifascism.

We honor Heather Heyer, who offered her life in the fight against fascism. We grieve for her family and carry her name with us forward in the struggle—along with the names of all those before her who gave their lives to the struggle. All active antifascists are our friends – and we will fight with them shoulder to shoulder, regardless of the ideology they support.

Antifascism is self-defense—organize antifascism on all fronts!