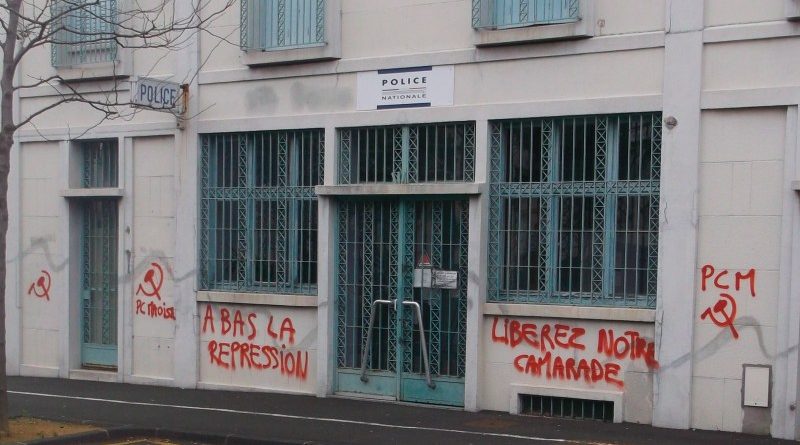 As he was leaving the town hall of Clermont-Ferrand following the mobilization in front of the municipal council, a comrade was arrested by the police. He tried without success to take refuge in the bar close to the town hall.

The cops waited him for him in two cars, one on each side of the street of the town hall. Why did they arrest him? They claimed that he would was “wanted”.

The same night, the police station of St Jacques was tagged with the following slogans: “Free our comrade”, “down with repression”. The PCM claims responsibility for this action, declares that it will never allow itself to be intimidated and will support their comrades to the end.

The comrade was released at 12:30PM, the bourgeois courts accusing him of “organizing a public demonstration that had not been previously decalred”. The demonstration in question was against the State of Emergency, it had taken place on Saturday, December 12, called by several organizations and had been a real success. For the French State, it is a matter of repressing the revolutionary movement and all those who dare to raise their heads in the leaden atmosphere of the State, as well as condemning Goodyear and repressing Air France.

The comrade goes on trial at the Court of First Instance on Monday, May 23 at 2:00PM. The PCM therefore calls, at the same time and place, for a supportative gathering in the name of the freedom to demonstrate against the fascisation of society. We call on all those who are on the side of the people to mobilize against the repression and the state of emergency which strikes militant workers, trade unionists, zadists, protesters repressed in Corsica and the inhabitants of working class neighborhoods!

Down with the state of emergency and repression!

Let us fight back blow for blow!

Dare to struggle! Dare to win!