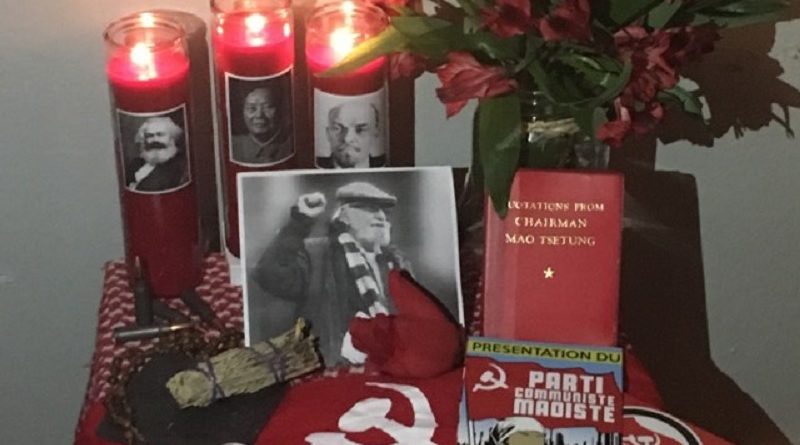 Our collective, since its early start has been inspired by the Maoists in France who have since then founded their party—the PCM. We are saddened by news of the loss of Comrade Pierre. We extend our condolences, love and respect to his Party, a party which has motivated us and taught us many things.  Pierre as a senior leader of the PCM has touched many lives all over the world, their loss is our own.  Last month one of our members was able to meet Comrade Pierre and we have included a short statement from this comrade.  To the PCM, your loss is felt across oceans!

Some thoughts for a veteran comrade

When you are a member of an organization which is repressed, harassed, and surveilled, going as far as the corner store can be a troublesome experience, and going across the world is considerably more difficult. Delays, extra precautions, bureaucratic paperwork, and jet lag are just the most minor of considerations. My journey to France however, was made worthwhile by getting to meet a veteran leader of the Maoist movement of that country. Comrade Pierre was in his eighties, he was still fit and mobile, and he spoke fast and sharp. Even with a considerable language barrier, we immediately bonded over the concept of urban PPW: “Like a steel belt around the city,” we both said at the same time in different languages.

I have been many places and met many comrades, but none so far have left the kind of impression on me as Comrade Pierre did. His mastery of MLM, his way of expressing himself, his lifetime of militant experience—all were above and beyond expectation. I am honored to have sat with a giant.

We spoke of many, many things over the span of a few days, days now laced with a tinge of loss. Most teachers if they are worth anything can impart a great deal of knowledge given enough time. Truly great teachers will impart this knowledge much more quickly. Pierre stated that we are not eternal, and in the biological sense he was of course correct, a thesis he would prove less than one month later. In the other sense, Pierre, you are indeed eternal. Your experience has trained a movement, built a party, a great party—the PCM. There are many comrades who will not hesitate to continue fighting on in your stead, and you live now in each of our struggles.

A fighter in May ’68, a tireless supporter of the people’s war in Peru, and a student of Marx, Lenin, Mao, and Gonzalo—you are a part of a whole. Many people in their eighties remark of the rashness of their youth, show concern that they were too extreme, and the excesses (when they admit them) light a small glimmer in their otherwise dull eyes. This glimmer, however, never left Pierre’s eyes for a moment. We spoke well into late nights, and on early mornings his stamina was greater than comrades’ a quarter of his age. Not for a moment did he lament militancy. He would wield it like the sword of truth: “This time we will go further!” Many men were militant; Pierre was a militant who never stopped.

His inspiration and his remarkable revolutionary life will be carried with me for the rest of mine. I hope to develop half the commitment and knowledge that he showed. Upon parting for what would be the final time, he grasped my arms with a firm grip, looked directly at me, and told me, in English, “Remember—and do not forget—build the party!” I gave him my word that I would give my whole life to this, and I aim to make good on my word.

We may have been locked in struggles half a world apart, but we are all in the same class, children of the proletariat, who must build our parties and wage our wars. The whole of the PCM has lost a great fighter, teacher, and revolutionary, but we too in the international communist movement have lost a rare and dedicated comrade, a comrade who cared deeply for the trajectory of world revolution and never took his glimmering eyes off of the final goal of communism.

Red salute to the very best among us! The only way to properly honor our dead is to continue the fight! Comrade Pierre is eternal! Long live PCM, long live MLM, long live Pierre!

Statment from PCM in English: Comrade Pierre is immortal