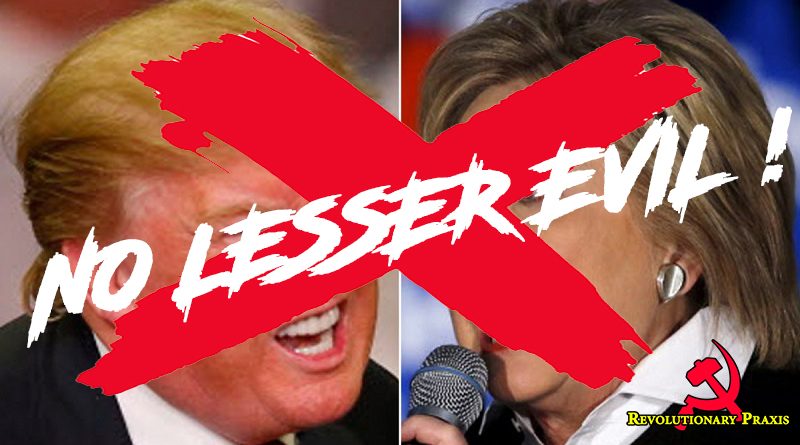 Politics in the heartlands of imperialism have not been so explosive and tumultuous since the end of world war one. The political parties of the ruling class are lurching to reaction, becoming fractured and right wing populism is seeing a surge in support not seen since the 1930s. What is missing is that there is no real revolutionary opposition or a left wing movement with a working class base to face off the ruling class onslaught. This at a time when objective conditions to spread revolutionary ideas have never been more favourable. This is nowhere more apparent than in the United States and is exemplified by the US election campaign. In the race for the Oval Office the public have been presented with two individuals from two plutocratic dynasties both owning billions of dollars

Despite the media presentations and propaganda both the main candidates of the Republican and Democratic Parties are thoroughly reactionary. Donald Trump running for the Republicans has spouted openly racist, misogynist and jingoistic rhetoric and the Democrats Hillary Clinton is a staunch Pentagon hawke yet the rhetoric she parrots has allowed her to be presented as a ‘lesser of two evils’ and even progressive. Nothing could be more false! Clintons rhetoric is directed at the social strata which the US imperialist state relies on to be propped up and seek the image of legitmacy. In the end it was the billionaire Trump who won the electoral college majority. Many of the ruined middle class and abandoned working class communities appear to have secured his victory despite the mainstream media ridiculing Trump. In fact this media depiction of Trump as the outsider of the political elite has given the impression that he is the ‘anti-establishment’ candidate, he is of course every bit a part of the establishment.

The imperialists are struggling again for a new re-division of the world. The United States is the most powerful and militarist imperialist nation on the earth today, but they are weakening and new rivals Russia and China are appearing to challenge their global hegemony. The US ruling class feels threatened by these challenges and is pursuing a bellicose policy of aggression and propaganda against them. The imperialists are already engaged in war against one another, this is seen in Syria. Russia is now fully engaged in combat in Syria to prop up the Baathist regime, some sections of the US ruling class are determined to prevent any Russian influence in the region others prefer reproachment and cooperation seeing China as the main challenge. The US is currently supplying advisers and arms to groups such as Al-Nusra and the so called ‘Free Syrian Army’ they have stopped short of implementing a no fly zone. Clinton has publically said she would support such a raising of the steaks. Trump however would prefer challenging China and Iran at some stage. Putin was the first world leader to congratulate Trump and offer the hand of friendship and the President elect appears to have accepted it. So much for Russia being ‘anti imperialist’ as some leftists maintain! Putin has always referred to America as ‘our partners’ and was desperate to make common course with them, sanctions take their toll and despite the rhetoric Russia does not feel strong enough to wage a war which is why they rely on the nuclear option. They would rather be America’s partner possibly against Europe of China. If Clinton had been elected she more than likely would have dragged the US military into a confrontation in Syria in the name of ‘democracy’ benefiting the US defence industry and possibly leading to major conflict with nuclear armed Russia.

Clinton played on identity politics and as a defender of universal human rights. At a time of complete ideological hegemony and social peace the ruling class of the imperialist nations can use such ideas as ‘human rights’ or individual rights to further its interests globaly, that is in reality the interests and rights of commodity circulation and opening new markets across the planet. This is no different to early 20th century imperialism which talked of ‘civilising’ the ‘natives’ of ‘backward’ countries. Indeed the Hitlerites in Germany used it as pretexts for invading countries of Eastern Europe. Such expansionist policies leads to war, devestation and plunder of the peoples in other countries which the US deems requiring civilising, e.g. Iraq. The most basic human right, that is the right to live is taken from millions. This ideology of liberalism gains support from large sections of the middle class in particular academics, journalists and managerial types, those who reproduce ideology. Some progressive workers are taken in by Clinton’s rhetoric of the defender of legislation against racism, LGBT equality and abortion rights for women. These were fought for by ordinary people and the legislation alone does not provide an actual change to the material conditions which foster racism, sexism and homophobia. But the contradictions in US society show that such an ideological hegemony is no longer holding, hence the appearance of Trump. In fact Clinton offered no alternative to neo liberalism which have thrown millions of working class American’s be they black, white, gay or straight into poverty. The election campaign exposed the total hypocrisy of the liberal establishment mustered behind Clinton, for despite their rhetoric of support for ‘minorities’ they could not conceal the fact that their country is seething with racism (institutional of course with the continued execution of African American’s by police), sexism (pornography industry and the fact Trump appeared to lose no support by his misogynist remarks) and homophobia (the Orlando massacre). While constantly harassing other nations such as Russia for not implementing legislation recognising certain ‘rights’ and highlighting bigotry in other countries the US is a society seriously riddled with such bigotry and racial oppression. The working class knew better then to trust such shame faced hypocrites and indeed there was a low turn out in the election, in fact the number abstaining was higher than actually either candidate received in support. The victory of Trump is a more honest representation of what the US empire clearly stands for!

Whatever the outcome of Trumps ‘isolationist’ foreign policy US imperialism is not going to change any time soon despite the claim by ossified leftists applauding Trumps election as a victory for anti imperialism and the working class! Certainly the election was a defeat for an aggressive militarist liberal section of the ruling class but Trump has began filling his cabinet with some of the most extreme Hawkes of the Bush era including former top military brass. Domestically Trump will begin a crack down against opposition. Before his victory he said the arch Christian fundamentalist Mike Pence his deputy would be the most powerful Vice President in history. He trumpeted ‘law and order’ during the campaign and has promised mass deportations to exceed Obama’s administration. Trump’s Keynesian economic policy appears more in the spirit of Roosevelt then Reagan but will only benefit America’s billionaires such as himself. Indeed his economic policy may well be preparation for war and recession, printing money will just make banks richer and any investment in one region will be at the expense of neglecting oppressed nationalities in America. His call to ‘Make America Great again!’ will no doubt lead to a boon for the defence industry in the US, he has also threatened to tear up the Iran nuclear deal, not of course to stop interference in Iran’s affairs but to launch a full scale attack against them in the future. Through his non stop Twitter diatribes he has taunted the DPR of Korea and threaten economic barriers against China. Economic wars eventually become military wars.

For the working class and oppressed in the borders of the US and in those countries suffering under its economic and political domination the struggle will continue as before the election.