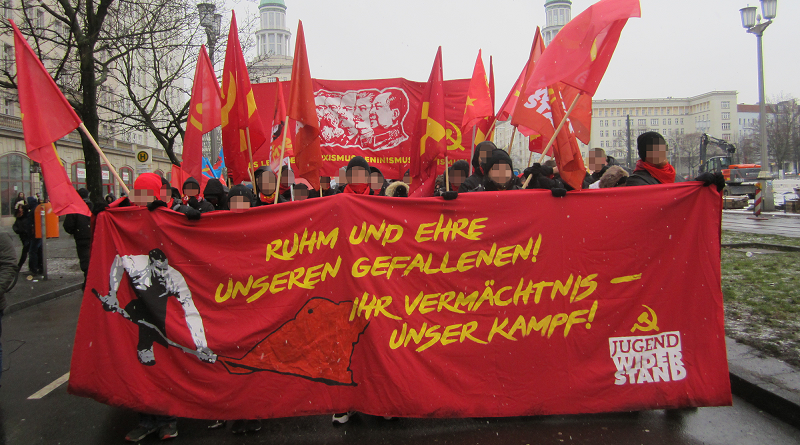 Under the main slogan ”Their legacy, our struggle” we launched activities- for the second year in a row now- to honour Lenin, Liebknecht, Luxemburg and all our martyrs.

The LLL-weekend matches with the tradition of our class, and also mainly the tradition of the KPD, which has to be rebuild again. The demonstration is besides that, a good opportunity for the ideological fight against revisionism inside of the revolutionary movement and for agitation of the political youth. Beyond that our weekend had an especially internationalist character this year.

We started the activities on saturday with a meal, collectively cooked by our comrades for all our guests from here and abroad. While having a lot of interesting conversations the evening came closer and we went comradely into the evening-activities.

In the evening there was a culture-event planned to honour the martyrs of the proletarian revolution and to create the right ambience for the demonstration on the next day. Here it was important to us, to rebuild the proletarian culture and to make our own contribution to its developement. More then 60 comrades were taking part in this intensive evening in Berlin-Neukölln. 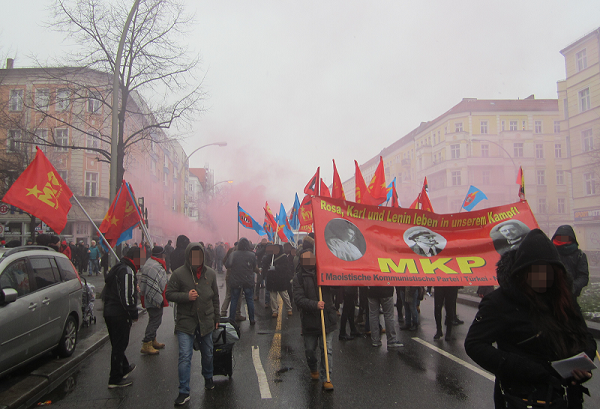 The opening speech from Jugendwiderstand, that described the reason for our gathering to all the comrades again, was followed by a culture-programm with performances of several revolutionary rappers, under them Taktikka and Detweiler. Rap is an important contribution to the revolutionary, proletarian culture and truly the language of the people and the oppressed and can be easily transformed into a weapon for our struggle. In between there were speeches and greetings. At first the Socialist Youth Movement (SYM) had a short speech, were they thanked us for the invitation and honoured Marxism-Leninism-Maoism. There were also greetings from the Maoist Communist Party of France and speeches of comrades from Norway and the Netherlands, that pointed out the importance of prolearian culture and proletarian internationalism. After that there were greetings from the The National Democratic Front of the Philippines (NDFP) to Jugendwiderstand, what was a highlight for many comrades, because this greetings came from a Communist Party, fighting People`s War since a long time; this is an honour that we want to fulfill.

After the last Rap-performance a masked speaker hold a militant speech in the name of the Maoist Communists of Germany and appealed to face the challenges and requirements of the revolution, without making cowardly compromises and to fight for the building of the party and perspectively for the beginning of the People`s War. Thereupon slogans were shouted :”Their legacy, our struggle! Youth is resisting!” and ”Marx! Engels! Lenin! Stalin! Mao! Viva! Viva! Viva!”. Directly after that there was a collective minute of silence for our martyrs, that ended with the slogan ”Glory and honour to our martyrs!”. 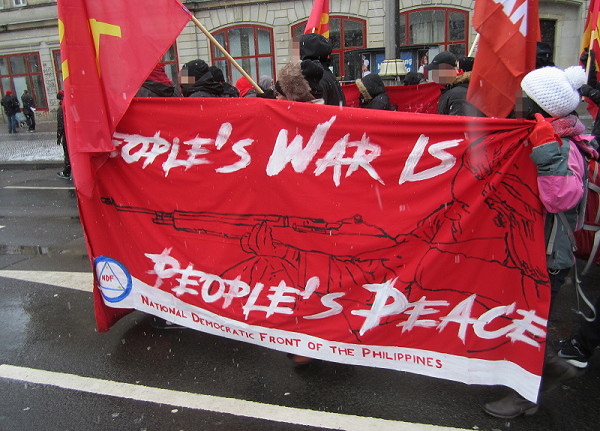 Then we sang german, turkish, dutch and norwegian Worker`s songs and danced the Halay, because the traditional culture of our international class holds a great treasure of collecive expression for our movement. In the end there was also a toast and a last speech from Jugendwiderstand, with a clear link to the history of our class and the party in our country, so we ended the event with a big applause and shortly cleaning up together at 23.30.

So we were succesfull, also profiting from our experiences with our little cultural event with the comrades of the YDG last year, in having a worthy and proletarian celebration, that can represent an expression of the culture, attitude and the fighting spirtit of our class and our fallen comrades.
So we also wanted to set a clear signal against the completely inappropiate hedonistic bullshit, that some forces were celebrating, basically snorting lines on the graves of our martyrs and dancing on them till the morning comes, while making ironic or sarcastic jokes under fake revolutionary slogans about the culture and the struggles of our class, not taking anything seriously anymore. We want to train warriors through our culture and not a little group of junkies, that can not even stand straight on the morning of the demonstration, if they even make it there. We generally are not against the artists and acts that perform at this events, some of then we call our comrades-but they should be aware of their responsibility, especially for the youth. We have to build a new, conscious, proletarian culture. A new seriousness regarding our tasks and everything that is connected to them, because the revolution is everything else than a big party. Our event was definetly a good step in this direction, that will certainly be extended a lot.

The next morning we went early to Berlin-Friedrichshain. This year again thousands of people were participating in the Lenin-Liebknecht-Luxemburg-Demonstration and gave life to this tradition- under it a meaningful part of young people. In contrast to the many revisionist, reformist, oppurtunistic and legalistic forces, we had a ”Red block” at the demonstration, that included and united marxist-leninist-maoist forces from different parts of the world and the revolutionary, antiimperialist youth on the basis of the struggle against imperialism, revisionism and reaction. Next to Jugendwiderstand, Comrades from the Maoist Communist Party(Turkey/North Kurdistan), ADHK, the Socialist Youth Movement (SYM), Tjen Folket from Norway, Revolutionaire Eeenheid from the Netherlands, and the National-Democratic-Front of the Philippines took part in the block. Over all about 100 comrades, where about half of them walked in the front block of the youth, in a relatively disciplined march formation.

Caused by the propaganda of the bourgeois press, the antigermans and the trotzkyists against us, the socialdemocratic organizers of the demonstrationn set up 10 people that should ”keep an eye on our block” for the whole demonstration and we were mostly accompanied by undercover- and groups of anti-riot cops. 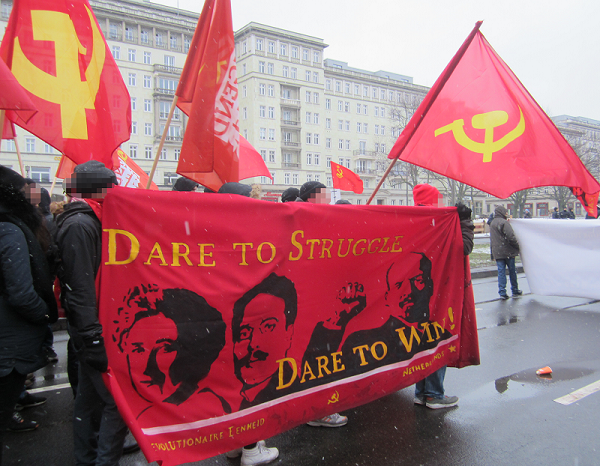 We didn’t let this intimidate us and shouted slogans like ”Viva Marx! Viva Lenin! Viva Mao Tse-Tung!” and clearly admitted to the ideology of the international proletariat. Also the slogans ”Dead to Imperialism-People’s War for Socialism” and the new slogans ”War to the state-Death to the reaction-Thats how we honour the martyrs of the revolution!” and ”All for the people, the class and the party!’ gave a militant expression to the demonstration and are a clear commitment to revolutionary violence.

The speaking choirs ” Viva CPP-NPA-NDF!”, ”Support the People’s War in India!” and ”Önderimiz Ibrahim, Ibrahim Kaypakkaya!” and other turkish and kurdish slogans were pointing out the proletarian-internationalist character of the block.

We are of course also happy that some of the slogans we made up like ”The BRD is not our state- All power to the proletariat!” more and more are used in the revolutionary movement. Together with the slogan of the KPD/ML that is again used ”Only if the masses take up arms- we can build socialism!”, (that they banned later themselves and called it ”too leftist”, because of their ideological degeneration) this gave the revolutionary youth in our country again some ideological sharp and correct speaking choirs, that express the will to struggle and the definite turning away from the state and its parlamentarism.

For the first time in years the cops attacked parts of the demonstration and were arresting some people. As a reason they took symbols of the kurdish national movement, that they criminalized. Our block showed determined solidarity against the attack of the reaction and with the arrested. 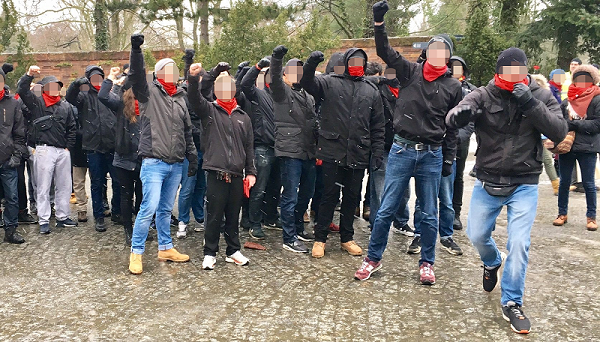 On the ”Graveyard of the Socialists” in Berlin-Friedrichsfelde we broke the common individualized and therefore depoliticized silence of the bourgeois ”mourning culture” with a collective expression: In front of the anticommunist memorial stone, the so called ”Memorial stone for the victims of stalinism”- that was set up there from the ”red” bourgeoisie and so mostly remembers: Hitler-fascists, imperialists and other people of that sort, we confronted all those present again with the historical truth; shouting the slogan: ”The Red Army and Stalins partisans, beated the Nazi-Wehrmacht!” and ”Marx! Engels! Lenin! Stalin! Mao! Viva! Viva! Viva!”.

Finally we hold a short speech in the central space of the graveyard and were singing the hymn of our class: The Internationale.

After all, for us as a youth mass organisation, we were abled to strenghten and to improve our activities- quantitatively and qualitatively.

So we can again confirm to our assessment from last year:

”We are convinced that, in the scope of the LLL Demonstration, a reasonable and honourable proletarian revolutionary commemoration of Lenin, Liebknecht, Luxemburg and all of our other dead is only possible when their revolutionary heritage is held up, defended and applied in the field. Only when we take the responsibility on ourselves and develop the struggle for the Socialist Revolution and against imperialism, revisionism and reaction in this country. This will be done only by our social class in an organized and disciplined form. The tasks are clear. We vowed it.”