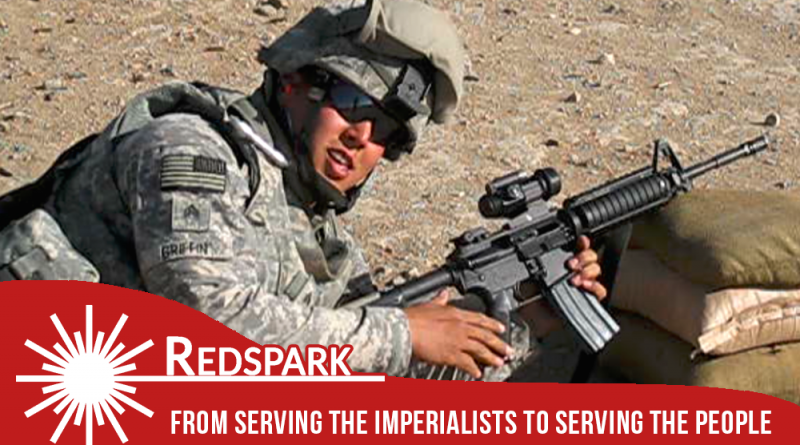 For this week’s interview, we talked with Will, a former US paratrooper (US Army Soldier) who describes himself as a former “imperialist watchdog” – meaning someone who worked for the imperialists like a dog watching their property and protecting them. His experiences in Iraq in 2006-07 and in Afghanistan in 2009-10 led him to the conclusion that  what he did there was in service of the imperialists and capitalists, not the working class of any country. Comrade Will has since worked with most US Antiwar/Peace/Anti-Imperialist organizations, and is today the director and founder of The Peace Report; an online source for anti-empire news.

Redspark: You went from signing up for the US military to fight in your “generation’s war,” to becoming a pacifist and peace activist, to opposing militarism and then finally imperialism. Most recently you’ve studied communist theory and philosophy. Can you talk about what you went through to end up where you are today?

I have to correct your question. I was never a pacifist; I just believed in using strategies of non-violence, which I do not believe in anymore. Having been in two wars, I’ve experienced violence. I prefer to never see it again. If non-violent strategies were actually successful in changing society, why would we choose violence? Of course, we revolutionary communists understand this is not the case. “Revolutionary violence” is a necessity to change society. I understand that now.

When I was in the military, I was a Christian, a conservative and a Republican. Most soldiers vote Republican because the Republican Party increases the wages of soldiers every year. But when I separated from the military I began to question everything. My first deployment (Iraq) made me question a lot, but I never found answers: why are we in Iraq? Who are we fighting? Is it worth it? Why are things getting worse? Do people in America even care? I continued to question things thereafter but never had time or resources to look deeper for answers. But when I became a civilian again and went to university to study US foreign policy and its history, I really opened my mind.

I began with an issue which was very personal for me (and personal for billions of people): religion. I began to question Christianity, especially in the US. After the first year as a civilian again, I threw away religion and became a militant atheist. I criticized all religion. But after so many arguments and lost friends, I saw that religion wasn’t really the key issue. So, I looked elsewhere.

I, then, found The Venus Project (TVP): an organization that is anti-capitalist and advocates for the most egalitarian and sustainable societies that transcend nationalities, religions, politics, and culture. They developed the most ideal world anyone can think of. It helped me realize the current problems surrounding capitalism and showed me what was possible in the future. I was hooked. For several years I organized locally for The Venus Project: gave presentations; developed educational videos and propaganda. I even met the founder of TVP, Jacque Fresco, three times and interviewed him twice.

After many years, I had more questions that TVP could not answer. The main question being: how do we get there? How do we transition society from this shitty capitalist world to a better world where people are as free as possible while maintaining a sustainable economy? I found Anarchism.

I tried to study the history of Anarchism, specifically in the US. It inspired me and led me to a revolutionary path. It answered many of my questions. I understood the complexities of capitalism more deeply. But again, I developed more questions that Anarchism could not answer. Mainly, I wanted more examples of overthrowing capitalism and the State to create a better world. When I asked for examples of anarchist societies developing and maintaining that society, I could not find many examples – possibly none.

Two years ago I began to look into socialism. It was difficult. There are many types of socialists and many different theories. I was alone and searching within a vast field of different kinds of socialism.

I wanted to look into the real and tangible examples where capitalism was overthrown. I was naturally drawn to the Chinese Revolution because I am East Asian (half Korean) and I studied the Chinese Revolution in a bourgeois university in California. Then I found a Maoist friend who mentored me, answering nearly every question I had about socialism, communism, and Maoism. I was hooked again.

Maoism really helped me get past all the negative propaganda I believed, especially from an Anarchist perspective. Anarchists see hierarchy as the key focus, and socialist societies still have the State in place. I previously believed socialists well intentioned people who became corrupted due to hierarchy, the State and the bureaucracy within. Maoism, specifically reading Mao’s literature and the mass-line, showed me that communists are always thinking about creating a better society. Maoists address these previous issues or failures. It really surprised me that communists, specifically Maoists, were so dedicated to finding a balance between overthrowing capitalism and developing a world which works for all people.

Learning about Marxism really helped me understand the world through a class analysis, or class struggle. It sharpened my critiques and narrowed my focus.

Maoism helped me understand that class struggle continues under socialism, but mainly it proved to me that revolution is a science. In addition, Maoism showed me that communists are extremely focused on solving issues surrounding a “top-down” approach in operating a socialist state. Principles of the mass-line, theories on practice and theory, Mao’s theory on contradictions, the military strategies, mass rectification campaigns and more all attracted me to MLM. All of these principles really showed me how dedicated and how deep communists think and struggle towards liberation.

Today, I am a Marxist-Leninist-Maoist and I’ve developed so much from this theory and practice.

Redspark: Can you describe how your ideas about violence and the military have changed and why?

I previously wanted to shed myself of all the violence I was taught and experienced in the US military. Now, understanding revolutionary communism more deeply, I realize that revolutionary violence is absolutely necessary to overthrow the bourgeoisie. US veterans, after 17+ years of fighting, have skills which can be transferred to the class struggle.

Rifles, grenades, hand-to-hand combat, shooting drills, urban guerrilla warfare, unit cohesion, discipline and more. These skills and experiences can all be used in the fight against the bourgeoisie.

My perspective on “violence” changed when I realized the non-violence is not successful but also that communists only use violence because it is necessary. This path isn’t just randomly chosen. It has been developed through both theory and practice, and it has been proven through last revolutions: the Paris Commune, the Russian Revolution, and the Chinese Revolution. Since we are literally losing time to change the world due to climate change, we need solutions which have proven to work. MLM is the solution, and it requires revolutionary violence to overthrow the bourgeoisie.

Some might say, why violence at all? If we properly analyze history we can learn from the failures of all non-violent approaches to rid ourselves of capitalism. Reformism has been in Europe for over 100 years and capitalism still exists and threatens the whole world. Election takeovers like Allende in Chile failed to bring about proper socialism. Social Democrats have followed the wrong path and have ultimately failed to be the true fighters of the working class. The proletariat has tried to dismantle capitalism through every possible measure with non-violent methods, and it has all failed. It’s time to be serious about using revolutionary violence to overthrow capitalism. As Karl Marx said, “Material force can only be overthrown by material force.”

Redspark: Among Maoists in imperialist countries, there is a deep interest for studying military theory, referring especially to People’s War. Having served in a bourgeois army and fought in an imperialist war, what is your perspective on this?

Most US troops never study military strategy. That’s usually for officers, and I was enlisted. The separation between enlisted troops and officers is a type of class system within the military. Officers are the commanders, or as we call them, “paper-pushers” because they never really do any real work. It’s just like the capitalist and the worker.

I will say, though, that imperialist countries, especially the US, have powerful militaries. The troops are well equipped and they obey nearly all orders. US troops will undoubtedly shoot Americans civilians on command. I am confident in this. Whatever strategy that is developed or followed in imperialist nations, people must understand this point.

Redspark: You work a lot with veterans in the US. What is their revolutionary potential?

One major difference is the Iraq and Afghanistan wars were the first major conflicts which did not require a draft. All US troops “volunteered” for their service. I put “volunteered” in quotations because we know troops come from poor backgrounds and join the military mainly for economic reasons, or to receive healthcare for themselves or their families. Another reason is to get a free college/university education. When the working class “volunteer” for military service on which they are dependent, they will do as much as they can to maintain those “benefits.”

The hegemony of bourgeois ideology is really strong with my generation of veterans. It’s difficult enough to get veterans to question their “service” and the wars. These veterans truly believe they made the world a better place. Have you seen a US veteran speak out against the wars? It’s rare, especially if you compare this to the Vietnam War.

One main problem is that veterans internalize everything. I believe it is due to neoliberalism. Although neoliberalism is mainly an economic policy, there are cultural impacts. One impact is to individualize everything. So many veterans come home, acknowledge they have PTSD and Moral Injury, then they either write poetry or kill themselves. Veteran suicide rates are extremely high right now. 20 veterans commit suicide every day. Also, the communist organizations which exist in the US right now aren’t really appealing to veterans. Revolutionary organizing requires radical change and I think we should always target veterans as possible recruits. Veterans are a large part of the US population, nearly 10 percent. Veterans have many skills and the American population respects them. And after studying US history, veterans have been a large part of revolts and rebellions: Shays’ Rebellion, Bacon’s Rebellion, the Miners Wars, the Bonus Army, mutiny’s during the Vietnam war, and much more. A part of Maoism is applying its universal principles to each situation accordingly. We must act on this.