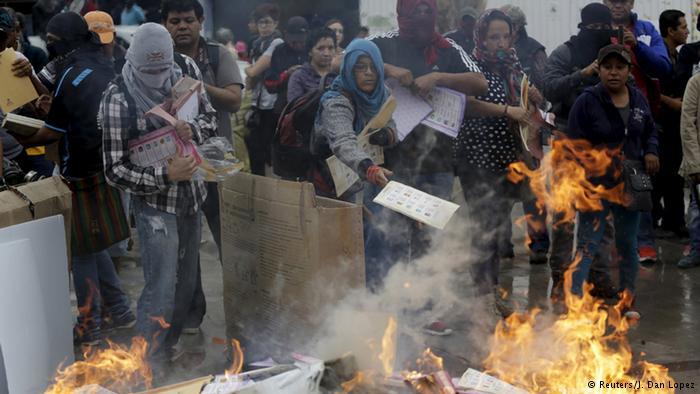 In response to the call for an election boycott issued by Red Guards Austin [1], Red Guards Philly stands with our comrades and with all oppressed & exploited people, within the United States and the world over, who are only harmed by the elections of mass murderers being seen as a legitimate measure of democracy.

First, we must look at the world situation. Capitalism-imperialism has only further revealed its hideous face of rampaging terror and economic parasitism with every additional year of its existence. In conjunction with this, the electoral politics which legitimize capitalism are continuously unmasked and shown to be a mechanism of maintaining the exploitative order. Maoists have always taken up the task of discrediting these circuses and instead focusing on building mass support and popular initiatives which actually benefit the people. In Peru, the Communist Party of Peru’s initial action to symbolize the start of the People’s War in 1980 was the burning of the ballot boxes, and they were successful in channeling people’s energy into mass work and other more revolutionary avenues as voting numbers decreased throughout the course of the People’s War. In India, one member of CPI (Maoist) explained their reason for boycotting Chhattisgarh assembly elections, which we quote in full unity:

“As usual, we have appealed to people to boycott the elections because they are a farce. Elections only renew five-year tenures of loot and torture by the elected representative in the present system. Our target is to change this system from the root and establish a people-centric society and that is not possible through elections.” [2]

In Canada, an imperialist country much like our own, the PCR-RCP has conducted election boycotts. In one document spelling out their reasons, they state:

“…the real objective of this election is no different than the ones that came before it: to decide which team will administer the Canadian state — the state of the capitalists, the rich and the powerful, a colonialist, imperialist and reactionary state. This always has been and always will be the nature of the Canadian state until it’s dismantled and replaced by a new people’s power. In this situation, what’s really changing? For almost 150 years, an endless stream of politicians has sat in the House of Commons without ever changing the nature of this country.” [3]

These words ring true for us in the US just as well. This country was founded on genocide and slavery, and it has been maintained on that same basis. How this unfolds is modified by time and place, but today we see that indigenous people are still crushed as a matter of routine, that Black people are shipped to prisons as a substitute for schooling, and that xenophobia is running wild in a country where white people were the actual violent, invading force. And as we do find ourselves within an imperialist power, it’s vital to keep in mind that legitimizing the rule of our capitalist overlords does not just harm the people in this country, but that it facilitates the havoc being wreaked on people all across the globe.

Just like in Peru, India, and Canada, elections in the US have also always been a tool of the ruling elite. This does not at all discredit the hard-fought battles of oppressed and exploited peoples, sick to their stomach with watching land-owning white men cast all the ballots, who fought tooth and nail to force the government to recognize their voices at the threat of hell to pay. We remember these righteous struggles led by working-class, nationally oppressed, and gender oppressed people themselves, and note that these movements had to be led by the people, because the rich and comfortable don’t make changes for the benefit of anyone else until they are forced to grant concessions to save themselves from the wrath of the masses. Every granted right to vote was to quell the growing rebellious nature of the empire’s exploited subjects, and even then there had to be battles fought to bring the ability to vote into practice instead of keeping it as a simple paper decree. The ruling class has had to concede and concede to keep itself alive, but through these concessions they have run into a wall. The limits of voting are now clearer than ever. History has shown that widening the pool of people who may vote for this or that representative does not change the nature of the representatives we are choosing from. More than that, there is no way of accomplishing the oft-repeated goal of “money out of politics” within the context of a society run on a capitalist basis. The history of the people’s struggle has forced the capitalists and their lackeys to reveal the true nature of electoral politics, and it is that they are nothing more than a charade, a very expensive magic show where people are made to feel that they are exercising political power while we choose from a handful of candidates who represent the same class with only minor policy differences.

Turning to the situation specific to Philadelphia, we quote from Red Guards Austin’s Don’t Vote, Revolt!:

“While many will participate in the theatrics by putting forward their best hopeless candidate, exhausting resources and volunteer time to get you to vote for a ‘socialist,’ we call this what it is—a waste of time.”

The above statement could not resonate more with us in Philly. At a time when many Democrats are recruiting for Hillary on the basis of “well, she’s not Trump,” it is worth pointing out that Philadelphia has been a blue city for going on 60 years, and the Democrats have not yet managed to really solve any of the problems which continue to plague our communities. During the primaries, huge campaign drives were made around Bernie Sanders and his center-left platform that culminated in massive marches and a final desperate mobilization to morally petition him into the Democratic nomination, only for the people inspired by this movement to have their dreams cruelly betrayed by his formal capitulation at the Democratic National Convention in July. The perennial third-party candidates like Jill Stein will remain what they always are, toothless loyal opposition to the ruling class. “Socialist” organizations have responded in several ways, all of them despicable. Some tailed behind the Sanders campaign, openly adopting its rhetoric while knowing damn well that he never had a chance, hoping that they could snipe a few recruits into their ranks in the process. Others are pouring all their resources into running their own insignificant candidates, shaking down all their members & supporters for cash and sending them all across the country to get their own party charlatans on ballots by pushing what they believe are more “radical” platforms. Lastly there are the more honest ones, who meekly suggest support for a few paltry ballot measures. From here we can see they are unanimously united around the need for some participation in bourgeois electoralism, and all rest on a thoroughly pessimistic pragmatic basis (despite any degree of posturing that suggests otherwise.) Ultimately the truth is that none of these organizations have any sort of capacity to defend any of the reforms or demands that they are putting forth. The rank-and-file may very well believe that some vague “people’s power” will do the trick, but we must assure them that the ruling class is in no way afraid of marches armed only with signs & megaphones. These organizations’ leadership on the other hand are playing a dangerous game; they rest on a house of cards and rather than truly uniting with the masses, are instead going all out for big-tent left unity. Unfortunately for them, none of these schemes can withstand the wind and rain that is sure to come.

The only thing that is capable of weathering any storm is the unity of the working class and the revolutionary movement. Red Guards Philadelphia recognizes this as the heart of our project – to turn the masses themselves into communists, because only the people are capable of achieving people’s liberation. This electoral boycott is an early action in the life of our organization, and therefore we cannot yet speak of our concrete unity with the people of Philadelphia, but we do believe that we will have no future without this unity. To achieve this, it is not enough to boycott elections, communists must offer an alternative. For this reason we are announcing our Serve the People initiative, which we hope to build hand-in-hand and brick-by-brick with those who see the need for something other than the endless waiting for politicians to finally get around to fulfilling their promises.

A Serve the People program is not a charity. It is providing for the needs of the people along with building class consciousness, and any effort to simply provide goods without the political component will fall flat. For this reason, an election boycott and the initiation of a Serve the People program are two sides of the same coin. We must destroy the old order and create the new. We must discredit electoralism, and create programs which actually benefit people – both in the short-term interests of the masses of Philadelphia today, and in the long-term interests of the working class the world over, and every generation that is yet to come. And to the point of this boycott: imperialist elections achieve neither.

This boycott will culminate with a day of action on November the 8th. Whatever the size of the demonstration, what matters is that it will show there are those who see the necessity of traveling along a different road: the revolutionary road.