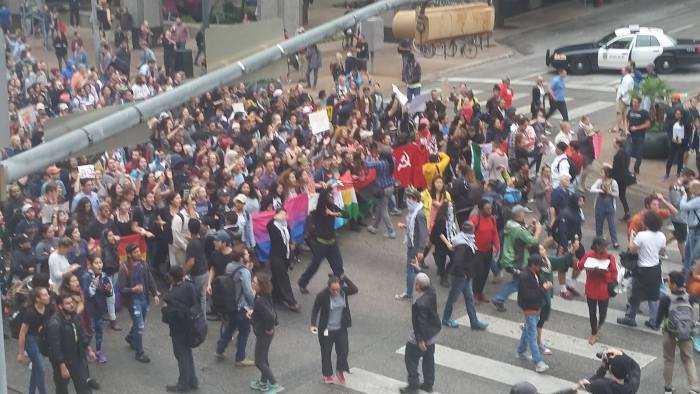 The following is an open letter expressing our solidarity and unity with Red Guards Austin during a time when they – and the US Maoist movement as a whole – enters into a period of heightened struggle where we will all be put to the test. While it is mainly addressed to these comrades in particular, it also contains insights that we wish to be conveyed to a general audience.

Comrades, we write this letter in solidarity with all of you, as you are selflessly throwing yourselves into the escalating anti-fascist movement in Austin, as well as throughout the rest of the country by means of RGA’s theoretical work on the question of fascism as it confronts us today, along with the practical lessons offered up to everybody through active participation in the struggle. Many of these lessons which we come to learn through the process of making revolution are not new, they are already found in the historical track record of many places and from many times. This is just how history develops – there never has been a straight march to victory, and the errors of the past never seem to stay in their graves. The latest lesson to become evident from the anti-fascist struggle in Austin is that liberalism functions as poison, enabling fascism and repression instead of fighting to overcome it. This is certainly not a new lesson for us historically – it was exactly the liberal tactics of lesser-evilism, respect for state authorities, and refusal to engage in armed struggle which saw revolution squashed beneath the jackboot of Nazism in Germany. But just as fascism will continue to rear its monstrous head until capitalism and class contradictions are left smoldering on the historical ash heap, so too will bourgeois liberalism be around to sell out revolutionaries, always there to persuade people to give voting just one more chance, and to label the violence of the oppressed as morally equivalent (or even inferior!) to the violence of the oppressor.

In Austin, this type of liberal ideology has expressed itself through misguided protestors thwarting attempts at de-arresting comrades, enabling the pigs to arrest several communists and activists on serious (yet baseless) charges, and even viciously assaulting one of our comrades to the point where they are now receiving medical care for a broken neck. This latest onslaught by the pigs is a clear intensification of state efforts to specifically target revolutionaries in recent weeks, as this event also comes on the heels of the charges against the UT Antifa 3 who were arrested for an alleged connection to the covering up of fascist graffiti which the University of Texas was happy to leave untouched for months on end. This is another lesson we are forced to learn wherever fascism emerges – existing bourgeois state forces are siblings to fascism, and will always aim their sights on revolutionaries while making sure fascists have room to operate. It is another clear example of how liberal enabler shit will get us killed.

These are the immediate conditions in Austin, and the political landscape across the country is not so drastically different. But for our ATX comrades specifically, it is times like these when we must show our utmost support. As you are all aware, one of the many lessons you imparted on those of us you hosted over the summer is the need to be able to rely on your comrades when it counts, that is when the struggle is the most arduous and painful. Of course, one immediate way to do this is to donate whatever we can to help cover the legal and medical fees that rack up when the repressive state apparatus is launching an offensive. We encourage everybody reading this to consider donating to help out some very dedicated revolutionary communists who are being targeted, through intimidation, through threats of jail time, and through physical violence, for the fact that they are partisans on the frontlines of the fight against fascism. But as Maoists in a time of intensified ideological warfare, in a time when communists are being hunted down by the pigs in power and by the doxx-happy fascists on the wings, we understand money is not the decisive form of solidarity. We would like to add a Maoist analysis of the advantages of these chaotic times.

One of the many things we’re taught by Mao is about the need for all-sided analysis, which includes understanding that bad things are not simply bad, but that there are the two aspects of the good and the bad. In the work “On The Correct Handling of Contradictions Among the People,” Mao talks of disturbances providing us with lessons to learn, and of the dual character of disturbances. He says bad things can be turned into good things. We believe he’s correct. State repression is a bad thing. It drains our energy, it may cause a dip in our morale, lower our fighting spirit, it can even take our comrades away from us. And yet… “to be attacked by the enemy is a good thing.” Why? Because lines of demarcation clarify the battlefield. Liberalism is a bad thing. It enables pigs to do their jobs of violent repression, it offers revolutionaries up to the state as an offering from the confused to the god they wish to bargain with. And yet the lines of demarcation get clearer – the masses see the pigs do what they do best, and they see the liberals do what they do best. And you, our comrades in Austin, are showing the people what communists do best. Communists fight. Fight against pigs, fight against liberalism which would see a movement die in its infancy, and most of all – fight and sacrifice ourselves for the masses of working & oppressed people. We are always in favor of situations becoming less blurry, of the truth becoming more apparent. Because, as Malcolm X once observed, “truth is on the side of the oppressed.” Through the actions and sacrifices of revolutionary communists, enemies of the people reveal themselves rather clumsily, and a clearer and truer picture is made known exponentially among the masses. Even those who have not yet begun to consciously break with this system will seriously question bourgeois liberalism and start to be won over.

And this speaks to another truth, that the enemy acts as a supply line for the revolution. Not just in military terms, but with respect to forces in general. Through their efforts of brute repression, the state only throws kindling on top of the growing wildfire. Even if they succeed in crushing one person completely, two or three more people will spring up in their place. In fact, the revolutionary movement is as alive in Austin as it is anywhere else in the US, with Red Guards, Serve the People, RATPAC, and the Revolutionary Student Front all serving as militant bastions either at the forefront of their respective struggles or emerging as such. The support for you comrades in Austin, both locally and internationally, is already shining through in the propagation of and sympathy for your fight stretching from far beyond just our collectives. The state of course will still have all the legal and financial power to beat a couple of us at their game, when they can force us to play it. But they cannot arrest, restrain, or assault a revolutionary ideology. Every crackdown directed at servants of the people will serve as a catalyst for more militant leaders to emerge and grasp Marxism-Leninism-Maoism. A lesson that the enemy has never seemed to learn, or perhaps is simply something that they can’t do anything about, whether they know it or not – blood does not drown the revolution, it irrigates it. They cannot kill the revolutionary rebel spirit of the Red Guards, for they would have to kill Maoism. They cannot kill Maoism, for it alone is the science of revolution in our era. There will soon come a time when the lessons of your current struggle will be summed up, propagated widely, and struggled with. This will provide a precious gift to all of us struggling to forge a Maoist Communist Party and touch the heart of the people, so that they may overthrow imperialism from within and wage socialist revolution on the path to communism. Surely aspects of those lessons will be valuable to those taking up the fight for communism in both the other imperialist countries like ours and the oppressed nations of the world as well. And that is the profound beauty that blooms from the hardship of the battlefield.

Which brings us to what it means to be steeled in the furnace of class struggle. This is something you comrades have recently touched on yourselves, in your latest piece on fascism: “All members of the front and all cadres must be tempered in struggle through repeated confrontations. We must all go through heart-checks, where our wills and our resolve are put to the test. Each time we develop as conscious and disciplined fighters who learn how to make war by making war.” Withstanding repression is a vital necessity for any collective which takes the Maoist Communist Party building effort as its goal, as a legitimate vanguard Party will face the most extreme repression imaginable. Here is the dual character of the disturbance of repression: on the one side is the immediate, short-term negative effects as comrades are silenced, beaten up, locked away, or even murdered. On the flip side, the long-term effect is creating the soil for more militancy, is the hardening of those who have passed through the crucible and come out with one goal drilled even deeper into their hearts, souls, and minds: revolution. Repression has never been able to kill a revolution, rather it is one external condition which challenges our internal structure, cohesiveness, and militancy, reminding us of the stakes at play and what it really takes to become a revolutionary force. To those who are only looking ten yards down the field, it may seem like the enemy is “winning” at times of repressive action. In reality they are steeling their opponents and planting seeds of rebellion which will blossom later down the line.

“Life will assert itself. Let the bourgeoisie rave, work itself into a frenzy, go to extremes, commit follies, take vengeance on the Bolsheviks in advance, and endeavour to kill off… more hundreds, thousands, and hundreds of thousands of yesterday’s and tomorrow’s Bolsheviks. In acting thus, the bourgeoisie is acting as all historically doomed classes have done. Communists should know that, in any case, the future belongs to them…”

The fundraiser to support anti-fascist work in Austin can be found below: