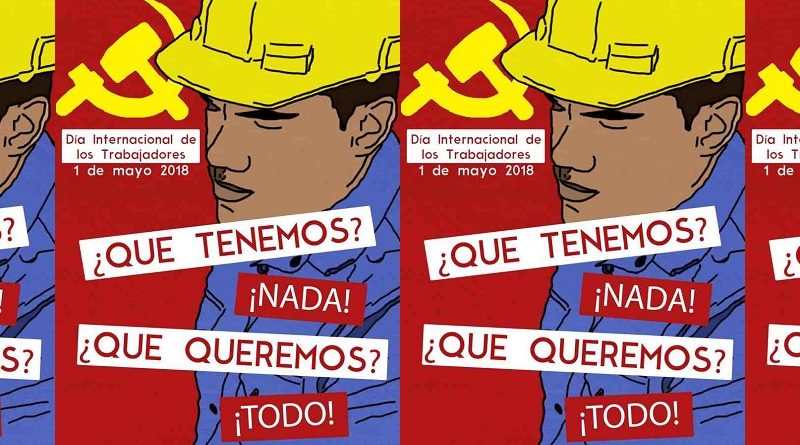 International Workers’ Day should be grasped as both celebration and rebellion. Communists must not content themselves with only one aspect of this duality. We cannot and will not dumb down our rebelliousness by carrying out routine socializing and call it “resistance.” This is to say that we will not be going to picnics, sit-ins, or other such pageants while pretending to “communize space.” For us, communism is inseparable from resistance. International Workers’ Day holds special significance as it was born in the blood of the working class in their struggles for the eight-hour workday. It is not honorable to simply sit around an area where one is already legally permitted to be and comply with the terms of the reactionary state.

Last year’s May Day activity in Austin serves as a perfect demarcation between our politics and those of soft social-democrats and revisionists. Revolutionary, anti-imperialist, and antifascist forces were targeted for attack by a loose coalition of fascists, and although it made us stronger, this fact was celebrated by those who admittedly tailed Austin politics-as-usual, collaborate with NGOs, and push for docile actions and symbolic acts only—never rebelling, always watering down their socialism until it is a drink palatable to their capitalist masters. There are still two May Days: their May Day that is white in color and ours that is red.

Maoism lives, and it is spreading across the globe. Communism is and will always remain a threat to the bourgeois order; we are but a small part of the glorious struggle of the proletariat.

Maoism in the US

The US Maoist party-building effort has seen great strides over the past year. Revisionists have been driven out and into obscurity while genuine Marxist-Leninist-Maoist (principally Maoist) organizations have approached closer to their goal of unifying under a singular democratic centralism. Our respect and solidarity goes to our sister organizations Red Guards Los Angeles, Red Guards Kansas City, Red Guards Pittsburgh, and Red Guards Charlotte. We extend our solidarity to organizations that are under the Red Guards banner even if it is not reflected in the name, including Revolutionary Association of Houston and Red Path Saint Louis as well as our close comrades in San Marcos Revolutionary Front. These organizations will spread and advance each year. They form the embryo of the communist party we aim to build.

Our respects to the revolutionary organizations of the masses across the US prisonhouse, organizations that inspire and provide lessons in class struggle daily. These include Serve the People organizations in Austin, Kansas City, Los Angeles, Charlotte, Houston, and Pittsburgh. In Austin, STP has lit the way by inspiring service programs to start in other cities with a diversity of struggle. They have wasted no time fundraising for political prisoners and holding antifascist concerts, all while engaged in supporting tenants’ struggles in the ongoing war against gentrification. In Houston STP has organized in neighborhoods affected by Hurricane Harvey, distributing goods, gutting houses, and carrying out political education among the people. In Los Angeles, STP is at the head of the movement in both tenant organizing and anti-gentrification for the neighborhood of Boyle Heights. They have helped their comrades in Defend Boyle Heights to shut down at least three gentrifying art galleries, and have helped to formulate working-class women’s self-defense. In Kansas City, STP increases the pressure against slumlords and has been bold and daring in their confrontations. In Pittsburgh, STP has maintained a steady presence among the most oppressed of their city and also taken up the tenant struggle as well as antifascist and anti-gentrification work. In Charlotte, STP has drawn clear lines against abusers and identity politicians, conducting anti-police work, cultural work, and other campaigns on behalf of their community. As Serve the People steadily grows across the country, they do so via their actions, demarcating them greatly from charity organizations that leech from the respect the name carries in hopes of conning the masses.

Serve the People stands as the main embryo of the infrastructure to come under socialism. By empowering the community on the local level and mobilizing them against class enemies, they set up people’s organizations and can develop people’s committees, which administer affairs outside the control of the state. These institutions will grow and one day help devour our enemies. This growth cannot occur independently of class struggle and confrontation. Serving the people means fighting back. Nothing is won without bloodshed. The working class is developing the means to control their own communities and push out any enemy who would seek to maintain control on behalf of the ruling class.

Austin maintains a presence of revolutionary mass organizations that exist to mobilize and organize the masses in their day-to-day class struggles; we wish to extend our comradely greetings to these orgs, which include Stonewall Militant Front, Defend Our Hoodz, and Revolutionary Student Front. SMF, which was formerly known as the Revolutionary Alliance of Trans People Against Capitalism, holds the forefront of working-class LGBT struggles. This trench of combat has long been left in the clutches of NGOs and bourgeois liberal organizers. SMF seeks to change this by carrying proletarian politics into the struggle of those facing the secondary aspects of this anti-woman system. RSF takes up the student trench and has raised the bar for student organizing in the US. Having taken up the call to put proletarian feminism into militant practice, they have led campaigns against campus-based misogynists in positions of authority and inspired bold actions like the dyeing of the UT fountain red and the adornment of nearby walls with revolutionary graffiti. DOH continues to deepen the revolutionary anti-gentrification struggle, mobilizing oppressed-nation and working-class people against violent displacement. These organizations enrich and advance the revolutionary movement in Austin, and it has been our honor to march with them on previous May Days.

Red May Day, past and present

This May Day marks the fiftieth anniversary of the French May ’68 uprising, in which students and workers shut the country down, struggling against both the capitalists in power and the revisionists who served them. Student and worker occupations and uprising brought the French economy to a halt and sent shock waves across the world. The major union CGT, which was at that time controlled by the Soviet-aligned Communist Party of France, tried in vain to channel the outrage of the masses into complacency via narrow economic demands (a rise in wages), but the masses and the revolutionaries were not fooled. This popular uprising was in part inspired by the Great Proletarian Cultural Revolution in China, and it too saw its share of Maoist activity. A party that could seize state power had not yet been formed, and in a short time the rebellions were quelled with parliamentarianism. It was in this struggle against capitalism and US imperialism however that our Comrade Pierre cut his teeth in revolutionary organizing. His passing last year reminds us that the spirit of ’68 still burns in the hearts of revolutionaries the world over. He would go on to help found the Maoist Communist Party of France, which carries on in his tradition. This is the type of party the French working class needs as its vanguard. It offers both the spirit of ’68 as well as corrections to its shortcomings. We are proud to support the PCM and call them comrades.

For three years we have led and organized May Day actions in Austin, and we will not relent. The first, in 2015, was in solidarity with the mass rebellions in Ferguson, Missouri, and Baltimore, Maryland. This demonstration drew out mass support and halted Austin traffic, frustrating the police department’s efforts to maintain and control it. Red flags filled the streets as the imperialist US flag was burned to ashes that were carried in the wind out to the Colorado River.

In 2016 we led an unprecedented march against gentrification, which took our fight to the heart of occupied Rainey Street and other gentrified places, where enemies were confronted and streets shut down. Multiple altercations occurred, but the people could not be deterred or discouraged. The message of Red May Day was carried not only to the enemy but among the people of East Austin, who face the brunt of capitalist exploitation and national oppression.

In 2017 we stood off against well-organized fascists while the police stood down and the revisionists hid in safety with the NGOs and local liberal politicians. This last year we also celebrated the hundredth anniversary of the October Revolution. It is our aim to keep the spirit of Red May Day alive and fighting in the streets of Austin, Texas.

We have nothing and we want everything!

The working class of Austin has been pushed out of the city’s center and into a deeper and lower state. Rent increases and attacks against us continue. The working class does not control what it produces; it has no control over media either. It has no control over education or the lives of its own children. As a class, we have been dispossessed and are disposed of when exploitation is no longer desirable or tenable. We are used and discarded like old farming equipment and we spend our lives in a rat race just to make ends meet. But the days of this degradation and misery are numbered, and it is by the proletariat constituting for itself a party that the roles will be reversed. The working class will win its liberation and the owning class will be repressed by the revolutionary state.

This will be the fourth year of Red May Days in our city. Fascist attacks and increased state repression will not drive us into inactivity or into the arms of revisionism. Police abuse, gentrification, sexism, racism, and US imperialism have not relented and we must not relent in our fight against them. We have no desire to reveal our plans for this year’s May Day to either the state or non-state class enemies. Let them know us by our deeds. Any revolutionary organization working among the people will earn its red flag in action.

We live in remarkable times; the world revolution has entered the stage of strategic offensive. Imperialism has divided the world and continues in its plunder. It is a dying beast wounded by its own greed and compulsion. It can simply go no further, and only socialism can replace it. Our slogan is “People’s War until Communism.” This means that until communism has transformed the lives of everyone on earth—when all classes and states have been abolished—there will be ongoing and raging people’s wars to end the old way and bring in the new.

Communist parties the world over must reconstitute themselves on the basis of Marxism-Leninism-Maoism (principally Maoism). These parties can and will abolish the old world and usher in a new epoch. All around, imperialism is in decay as it gorges itself on dead workers. We are now armed with greater unity among the Maoists of the US, who have begun to militarize, gaining small victories in class combat. These organizations are the embryo of the communist party that will take state power and impose the dictatorship of the proletariat. In all countries of the world, communists must build or reconstitute their parties and begin serious preparation for armed struggle. We must not compromise by endorsing bourgeois parties at the expense of proletarian internationalism—for it is only the communist party that can serve as the vanguard of the people.

Revisionism will be swept away and the imperialist world will tremble. We stand at the threshold of a new world, a world that will be won by communists through revolutionary violence. Each May Day we march steadily closer to our goal of taking up our post in the people’s wars of proletarian world revolution. Communists must reject the phony “left” that stifles the creativity of the masses. We must strive for our own independent actions to celebrate our struggles and confront the enemy every May Day.

Build and reconstitute the communist parties!