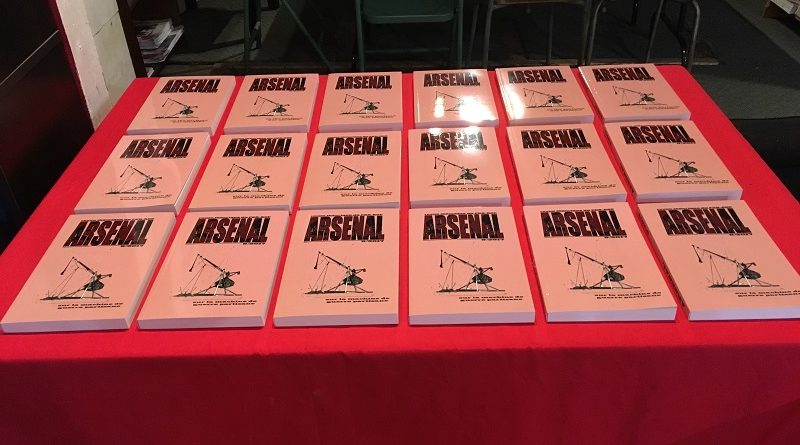 This year marks two anniversaries: the 150 year an-niversary of the founding of Canada and the 100 year anniversary of the October Revolution. Both are significant for the re-initiation of Arsenal––the theoretical journal of the Revolutionary Communist Party of Canada [PCR-RCP]––though for drastically different reasons.

The first anniversary, which the Canadian state will be celebrating from January to December, represents the founding of a blood-drenched capitalist state after just over three hundred years of colonial settlement and plunder. In 1534 rising European powers made contact with the Indigenous nations that composed the social fabric of the regions that would eventually be enclosed in the borders of the entity we now call Canada. After numerous vicious and genocidal policies enacted alongside the clash between colonial powers, not to mention the important and heroic resistance of the original nations, the settler-state of Canada was established in 1867. Since the PCR-RCP has maintained, since its own foundation, that any revolutionary movement worthy of the name “revolutionary” must reject the colonial entity of “Canada”, this anniversary is significant insofar as it represents a mythology that we reject. Doubtless this year will witness claims about Canada’s supposed “greatness” that either dismiss/downplay its history of “blood and fire” or, due to the rise of fascism, celebrate colonial might. Our entire existence, and the theoretical understanding that guides the essays comprising this journal, is premised on the rejection of the Canadian myth: from our beginning we have understood the ways in which Canadian nationalism has crept into the communist movement; Canadian left nationalism is synonymous with revisionism.

Thus, it is the second anniversary that we celebrate––an anniversary that those canonizing Canada’s 150 years will likely reject and belittle. Whereas 150 years ago the managers of colonial rule consolidated their predatory hege¬mony, 100 years ago on the other side of the world our ideological ancestors succeeded in launching the first successful communist seizure of state power. In the face of the armed might of the reactionary state, the Bolsheviks led by Lenin not only declared victory but consolidated this victory into the first example of modern socialism, a dictatorship of the exploited and oppressed rather than a dictatorship of exploiters and oppressors. Unlike the anniversary of Canada’s founding, we believe that the anniversary of the October Revolution is worth celebrating. But we can expect that the Canadian ruling class, excited to peddle the ideology of Canada’s “greatness” during this anniversary year, will also expend time and energy, along with their counterparts south of the border and throughout the imperialist camp, rehashing old cold war propaganda about the Russian Revolution so as to confirm its failure as pre-ordained: revolutions are “monsters that eat their young”, capitalism is the “best of the worst”, everything outside of the capitalist world order is “totalitarian”, and the so-called “end of history” is a fact of nature… This is the real totalitarian worldview and one that we should roundly reject.

It is in this context that we are relaunching our theoretical journal, Arsenal. Over a decade has passed since the original run of Arsenal, a series of magazines the initial Organizing Committees of the PCR-RCP published in the lead up to the drafting of the party programme. Since that time, while we have grown as an organization and engaged in various and important practical labour, aside from a few notable exceptions we have not produced any new theore¬tical work for popular consumption. Since we uphold Lenin’s statement that guided the October Revolution (without revolutionary theory there can be no revolutionary movement) it is necessary to redress this theoretical absence.

But, since we are not merely “Marxist-Leninist” because we also uphold another revolutionary sequence––the one conceptualized under the term “Maoism”––we understand the business of organizing and preparing for a revolution in a way that is different from, though inspired by, the Bolsheviks in 1917. The “party of the new type” that we aim to build in Canada, the project towards which all our energy has been dedicated, is not simply a “Leninist” party but a Maoist party. Hence we figured that it would be appropriate to reintroduce our theoretical journal according to this theme: the Maoist party of the new type. At the very least the following articles will acquaint the curious reader with the way we see ourselves as an organization and what makes us different from others who also celebrate the legacy of the October Revolution.

We sincerely hope that the following articles will be helpful in thinking through the task of making revolution in this social context, a task that necessarily requires a rejection of this year’s celebration of Canadian Confederacy.