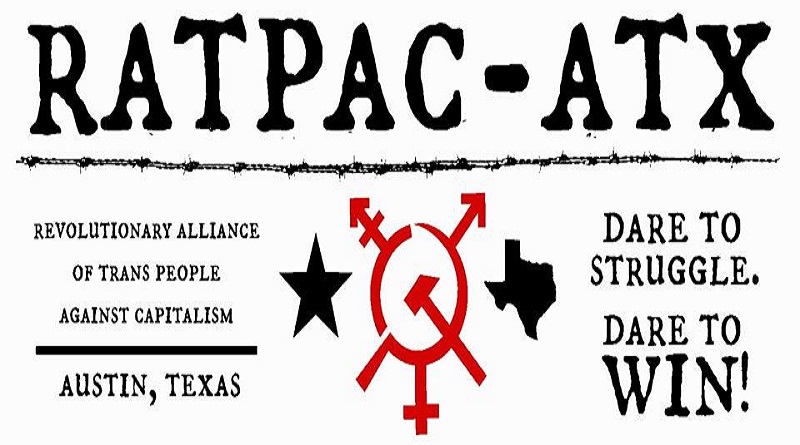 In Texas, SB6 is legislation seeking to rigidly regulate the use of restrooms in publicly funded institutions–such as schools, universities, state buildings and libraries–criminalizing (with a punishment of up to 15 years in prison) the use of any restroom which deviates from the at-birth gender assignment of a person as denoted on their birth certificate, modeling itself after similar legislation passed in North Carolina last year. In RATPAC, we do not see legislation as the primary battleground of working class and oppressed peoples: the capitalist system and its culture is vile to the core, and any concessions from the ruling class should be the result and not the goal of a militant revolutionary movement aimed at destroying it. However, we have to put this bill in our current political context: one of rising fascism and reaction that this type of state-sanctioning seeks to further galvanize.

“You can mark today as the day Texas is drawing a line in the sand and saying no.”

We say, same to you, scumbag. May every ounce of piss of trans workers and students not able to be disposed of safely end up on your newest tailored suit.

Lt. Gov. Dan Patrick and all other politician scum supporting this bill are concern-trolling pigs who only speak to “moral obligation” on matters such as sexual assault when it is opportunistic for them to act as thinly veiled agents of patriarchy. We know that when it comes to public sexual assault, trans women face a heightened rate of this violence–something which this bill seeks to further facilitate.  Usually, these suits keep busy with attempting to defund resources that provide important health care services to oppressed gender people, something which the pig called Dan Patrick has helped spearhead when he’s not buddying up to actual rapists like Trump. Despite them pushing the (widely debunked) mythology of the trans “bathroom predator”, the irony is that it is these suited charlatans who behave like all actually-existing sexual abusers: in their eyes, survivors are only worth what they can be exploited for.

We know that, in reality, the already existing levels of bathroom policing around the metaphysical “male” and “female” biosex categories has led to state-sanctioned violence not only against trans people, but anyone who cannot live up to the hegemonic image of what these categories mean to a white supremacist and capitalist society: Black, disabled, and lesbian women generally who often fall outside of these confines. This bill is part and parcel to further emboldening cops and their wannabes to take action with a false air of nobility, while the rates of domestic violence and sexual assault within this grouping remain starkly higher than the general population.

We know that, given the nature of this bill, this will most affect trans working class youth in public schools.  Despite what we know about cops being disproportionately (and far more than trans people) enactors of the worst instances of patriarchal violence, the state is now inviting them into the bathroom with our youth to regulate their genitals.  The way in which this particularly targets youth is no mistake, either.  In this time of rising fascism in the United States, more and more do we see sections of the ruling class scrambling to reassert traditional gender roles, to reach for neo-völkisch aspirations of cisgender white nuclear families, to beat out of the youth any form of fighting spirit, and to continue to uphold the gendered requirements for capitalism’s division of productive and reproductive labor. To reproduce its ideology, this system and its beneficiaries understand that keeping a deathgrip on the youth is key. And many of the youth already intuitively understand that this is a reality.

In regards to combatting this, working class trans youth in public schools will find themselves at the forefront.  The world is ultimately theirs, and we see it only fit that we arm them with an ideology and the organizational means capable of turning this society and its rotting gendered culture upside down by any means necessary. As such, in response to this bill and moving forward regardless of whether or not it passes, we will begin further propagating and organizing resistance within Austin’s public schools. As we move forward in our emergency housing program, we will also move forward in equipping the youth with the material and ideological tools necessary to begin disrupting, organizing, and fighting back as necessary.  The masses are unlimited in their creativity in struggle, and the youth particularly so. In the face of such a bill, and in a time of rising fascism in the United States, they deserve to be and must be unleashed. More on this to come.