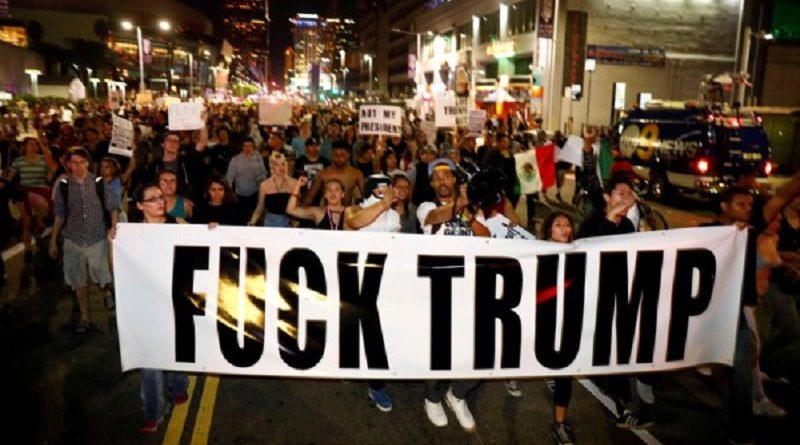 Despite the predictions of all media and polls, Donald Trump won the United States presidential election. This election and the campaign before it are nothing but a bitter joke against the oppressed masses not only of the United States but of the whole world! A sexist, racist, daddy’s boy billionaire, business upstart at the head of the most powerful imperialist country…

What is to be learned from this election ? The “anti-system” posture adopted by Trump during his campaign is on par with that of the European far-right, and therefore of the Front National in France. They are on the frontlines to defend imperialism by campaigning on topics that intensify the contradictions among the people. They are dividing the working class and the popular masses by scapegoating so-called ‘profiteers’ of the system and making them responsible for daily issues (unemployment, insecurity, …). They are trying to mask the fact that the bourgeois are the real parasites and profiteers! The capitalists, living by stealing our wages, are exploiting our work force and speculating on our backs! They are the ones creating unemployment, housing crisis, business closures, etc. Whatever Trump said in order to get votes, he won’t change anything about it. There is no way out other than overthrowing the capitalist system.

As in France after Nicolas Sarkozy’s election in 2007, demonstrations with numerous clashes are happening throughout the United States. This is actually where everything is decided, not in voting boothes. Even if this is only an immediate reaction, it must be put in perspective with the mobilisation against police brutality – which is not likely to wither away with Trump in the White House! It is clear that the (far too) numerous fascist, neo-nazi, white supremacist groups are going build on the momentum of the election and multiply their actions against revolutionaries, progressives, and their usual targets.

Moreover, Trump’s coming to power is simultaneously a rupture and a status quo. It is a rupture in style, in the kind of promisses made during the campaign, in the ‘anti-system’ posture (stinking of racism, sexism, and xenophobia), in the (right-wing) radicality of his positions or that of those who might become members of the government (Sarah Palin, Rudolph Giuliani, …). It is a status quo in that despite all he might have said, Trump will remain of faithful servant of the imperialist bourgeoisie, he is going to put the interests of this class above that of any other, he is going to keep on pillaging oppressed countries and spreading war across the planet – even though his campaign was considerably less interventionist, militarily-speaking, than that of Hillary Clinton –, he is going to defund basic public service (healthcare, education, transportation, etc.), which some of his supporters will suffer from.

Trump is ‘bad news’ for the oppressed peoples of the world. He is a representative of the political current building on the rejection of the elite in order to strengthen the domination of Capital. He will just redistribute the cards in favor of the part of the imperialist bourgeoisie whose support he can count on (and vice versa). Trump is a representative of latent fascism – different from historical fascism but no less dangerous – which is gaining ground all across the planet. Bulgarian communist Dimitrov, famous antifascist of the Communist Internationale, has explained how historical fascism had been able to gain the support of part of the masses:

“What is the source of the influence of fascism over the masses? Fascism is able to attract the masses because it demagogically appeals to their most urgent needs and demands. Fascism not only inflames prejudices that are deeply ingrained in the masses, but also plays on the better sentiments of the masses, on their sense of justice and sometimes even on their revolutionary traditions.”

– Report to the 7th Congress of the Communist International, 1935

Let us see what dangers we are facing in order to best prepare for what our class enemies are working on.

Let us salute our comrades in the United States who are undertaking revolutionary struggle. We know that they will do everything so that this polarisation of society be favorable to the development of revolutionary forces. We support those who called for the boycott and we are doing the same regarding the 2017 French presidential election to come.

The boycott was meant to revolt! Time is now!