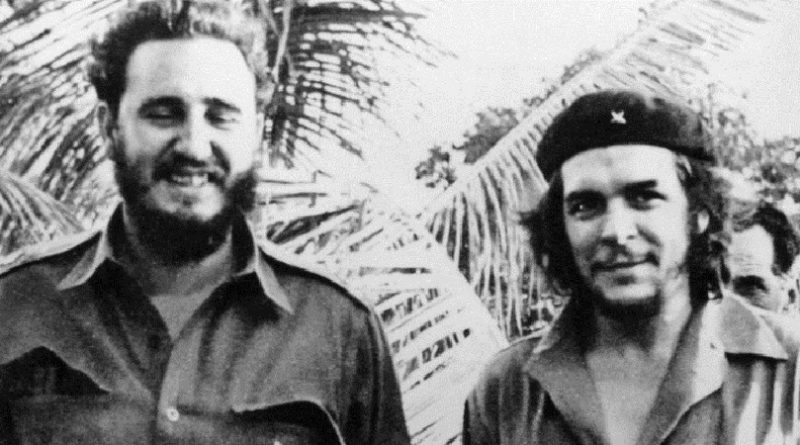 It’s over! Fidel Castro, the “Líder máximo” who ruled Cuba for 45 years, passed away peacefully on 25 November.

Hero for some, bloodthirsty dictator for others, but what is the reality? It is not our aim to draw up a definitive account of the Cuban revolution, nor of the recent history of the island. As in any revolutionary process, it is necessary to adopt a class perspective: indeed, for the people benefiting from a political system, the reversal of this system will be experienced as a horrible tragedy. What interests us are the Cuban masses: have they benefited from Castroism, and what kind of regime has it been? Communist? Socialist? Nationalist?

Castro upsets even in his death. The heads of state are divided: some wanting to pay homage to him, others not. The governments of Vietnam, North Korea, Bolivia, and Greece sent their condolences, some of them traveling to do so. This array of regimes–not the least communist, having each betrayed their own peoples–gives an idea of ​​the situation. Better sometimes to stand alone than in bad company.

NATO regimes, led by the USA, have kept their distance. If the Cuban domestic market interests them, it is necessary to keep up appearances, Cuba having long stood worldwide as a powerful anti-imperialist symbol.

But what is the communist perspective on the Cuban Revolution? We Maoists took stock of modern revisionism in the 1960s. We have never had any illusions about the Cuban Revolution; we do not entertain myths as, for instance, the PCF does. But since both Maoism and Castroism were the result of revolutions that had triumphed in the same period in semi-colonial countries, some people confuse or mix the two theories. Let us return to some historical elements to see this issue more clearly.

We can divide Castroism into three periods: the Cuban Revolution, state construction during the Cold War, and the reforms of the contemporary period.

The Cuban Revolution represents a historically heroic but also singular moment. Castro was first politicized in various Latin American countries, including Colombia. In this country, as in Cuba, authoritarian regimes supported by the USA overthrew the leftist governments by force. Castro understood that the bourgeoisie supported by US imperialism will leave no chance for reforms passed through the elections and thus radicalized himself. He was then a nationalist interested in Marxism — but without defining himself as a communist. After an initial setback with a stay in prison, he met Ernesto “Che” Guevara in Mexico, and the two revolutionaries mounted an expedition with only 82 men and a boat to lead the revolution in Cuba. Of these, 66 were quickly killed or captured. Everything seems finished before it began.

However, the Cuban dictator Batista did not consider it useful to track the survivors of the expedition. Castro and his men retreated into the Sierra Maestra, there gaining more and more support from the peasants, and developing contacts and then cells in the towns, encircling them from the countryside. After a courageous struggle (from December 1956 to December 1958), the revolutionaries took power in Cuba. There are several reasons for this success: the determination of the fighters, of course, but also the weakness of the Batista regime undermined as it was by the US’s widespread and craven corruption, the regime’s strategic errors, and the excellent media image enjoyed by Castro’s troops.

An embryonic people’s war, victorious in an exceptional situation, was thus transformed into a revolutionary legend. From impoverished analysis of the Cuban experience came theories such as Castroism and Guevarism (or “focoism”), which went from failure to failure, leading to the tragic but predictable death of Che Guevara in Bolivia.

Nevertheless, popular measures were implemented: agrarian reform for the benefit of the peasantry through the expropriation of large landowners; expropriations of the comprador bourgeoisie and the American imperialists; free access to education, health, transport, and culture; universal access to housing and work; the struggle against machismo and racism. These measures considerably improved the living conditions of the peasantry and the working class and constituted a radical break with the conditions under Batista. The methods used, however, were too bureaucratic, based more on decrees than on mobilization of the popular masses for their implementation.

Then came the period of the Cold War for the island, the Cuban missile crisis and the choice of an increasingly important economic dependence on the USSR with Cuba producing sugar, and more, for the Soviet bloc. Basic goods and machinery were imported on a massive scale. But Castro, even while claiming to be Marxist-Leninist to facilitate his integration into the bloc, remained in the final analysis a nationalist. When the USSR and the People’s Republic of China clashed on the question of revisionism, he refused to choose a camp: for the Maoists, this position was “centrist”, opportunism stuck between two chairs. This position, of course, is a consequence of Cuba’s economic dependence. Shortly before his death, Che Guevara paid tribute to the Chinese revolution; things could have gone in another direction. With this revolution’s dispersal, the Cuban support for the liberation movements in the Americas and Africa also largely dissipated.

The reforms continued and became widespread during this period, but there is no general direction, no revolutionary strategy guiding the country towards communism: since the country was not autonomous, it could “walk on its two legs” and follow its own path.

For their part, the US imperialists cannot tolerate this socialist state at their doorstep. They attacked Cuba systematically, putting in place a very hard blockade, attempting to assassinate the leaders, sabotaging installations, engaging in massive disinformation campaigns, and even organizing a military anti-Castro invasion–concluding in defeat–during the landing of the Bay of Pigs. Castro tailored all his propaganda around this imperialist threat, which was very real in the 1960s. Following these threats, Castro’s anti-imperialism is flimsy because it focused on the most direct imperialist threat but did not question Soviet social-imperialism or the ideological basis on which it relied: revisionism.

But things change little by little, and the world is changing. Soviet revisionism eventually collapsed. And the situation in Cuba is deteriorating. Workers are no longer paid or are badly paid, services grow worse and worse, all protests are severely repressed, and a currency reserved for tourists has been established, on which the island’s economy is becoming more and more dependent. Social policies are gradually deteriorating as Castro’s government refuses to reconsider its strategy and instead locks itself in its ivory tower, attributing all the problems to American imperialism and to the violent embargo it imposes on Cuba.

We know many sincere revolutionaries who have visited Cuba in recent decades to participate in work brigades or simply as travelers. Those who do not voluntarily fool themselves are surprised by the poverty, resulting in crime, drug dealing, forced prostitution, and corruption. Though the still free and popular culture of Cuba is an exception to this trend, even the health system that was the pride of the island is degrading. The liberalization of the economy, which some anti-Castroists were waiting for, does not mean collective freedom: as everywhere, inequalities fit very well with a repressive and anti-people regime. Behind the symbol of resistance there is the reality of the Cuban example. Of course social classes were not abolished through revisionism. Far from it. Today, the working class and the peasantry are hit hard by the opening of the market to foreign capital.

We salute the Cuban Revolution and the role Castro played in this anti-imperialist and democratic revolution, which allowed the emancipation of Cuba from American control and which was the basis of many social advances. We are nevertheless critical of the direction taken by the leadership of the Communist Party of Cuba and its head Castro to line up behind the USSR in order to protect itself from the threat of American intervention. This erroneous line made the Cuban economy unbalanced and prevented the development of socialism, necessarily leading to the restoration of capitalism. This led Cuba to approach the Russian and Chinese imperialisms after the fall of the USSR. The Cuban revolutionary example is thus for us not the flagship of the anti-imperialist struggle; and Cuba, as soon as it was placed in the orbit of the USSR, could no longer be considered a socialist country because of its strategic direction. This struggle, however, is rich in lessons for revolutionaries, enabling us to understand the brutal dynamics of imperialism and the strategic problems encountered in any struggle for national liberation.