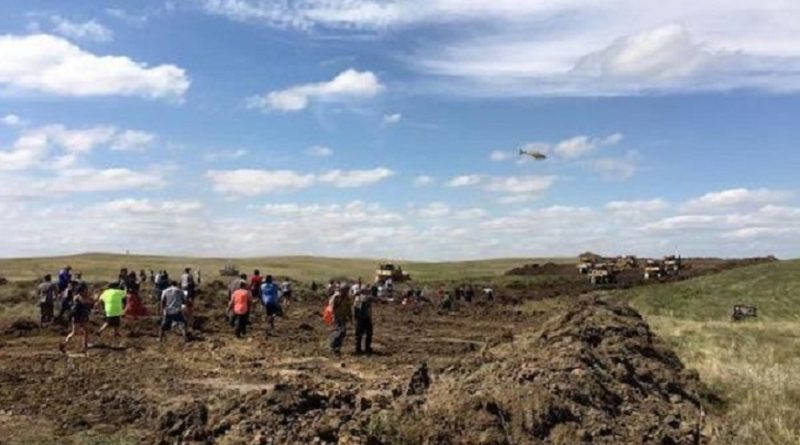 “We are at site 21, and we shut down construction,” said one demonstrator while live streaming a video on Facebook.

At least one woman and one man were locked to machinery on Tuesday while dozens of others encircled the area singing Lakota prayer songs. Banners were strung across the machinery, one saying “Water is Our First Medicine.”

A small number police officers arrived onto the scene and monitored the non-violent direction action.

Meanwhile, hundreds tuned in and offer their support via live streaming video on Facebook.

“We are here,” Cody Hall, of the Red Warrior Camp, said to a crowd of supporters. “A brother and a sister that once again have locked down and put themselves on the frontlines, literally stopping construction.”

“We have to keep our heads up,” Hall added. “We are the protectors … We are going to win through peace. Standing vigilant, brothers.”

Non-violent direct action trainings are offered regularly at the camps at Standing Rock and are conducted by trained professionals.

On Friday, the Tribe filed court documents identifying the area as home to significant Native artifacts and sacred sites.

“This demolition is devastating,” Archambault said. “These grounds are the resting places of our ancestors. The ancient cairns and stone prayer rings there cannot be replaced. In one day, our sacred land has been turned into hollow ground.”

Construction crews removed topsoil across an area about 150 feet wide stretching for two miles, northwest of the confluence of the Cannon Ball and Missouri Rivers.

Thousands of people from across the United States have joined the Standing Rock Sioux to protest Energy Transfer Partners’ building of the 1,200-mile Dakota Access Pipeline. If it’s built, a half-million barrels of crude oil would pass through the line daily.

The Standing Rock Sioux have filed suit in U.S. District Court for the District of Columbia to stop construction. The Tribe says it was not properly consulted before the U.S. Army Corps of Engineers fast-tracked construction approval.

A decision in that case is expected by September 9.

“We’re days away from getting a resolution on the legal issues, and they came in on a holiday weekend and destroyed the site,” said Jan Hasselman, attorney for the Standing Rock Sioux Tribe. “What they have done is absolutely outrageous.”

A group of nearly 100 people crossed onto private land to stop bulldozers that were clearing land for the Dakota Access pipeline on September 1.

Construction was shut down for the day on Saturday as private security guards from Dakota Access LLC arrived with barking guard dogs to push back the crowd of water protectors, including women, children and horses. It was reported that company security guards used pepper spray in addition to canine units.

In a statement released in a live-stream on Facebook, Red Warrior Camp leaders said that at about 3pm on Saturday September 3, “water protectors successfully stopped pipeline construction as it reached Hwy. 1806 through nonviolent direct action and mass assembly.”

As they did so, private security guards working for Dakota Access LLC “deployed vicious attack dogs, pepper spray and physical assault against the water protectors,” Red Warrior said. “According to the most recent update, six water protectors were bitten by dogs, a dozen or more pepper sprayed, while others were physically assaulted, including women. A helicopter was photographed flying over the area.

They also asked supporters to take note of the fact that Dakota Access’s parent company, Energy Transfer Crude Oil Co. LLC, “feels justified in using this level of force against unarmed and nonviolent water protectors and the state officers that are sworn to protect the people allowed it.”

Red Warrior put out an all-call for “ALL water warriors around the world to come stand with us, inviting supporters to join us in prayer” during two Weeks of Global Solidarity Actions between September 3 and 17.