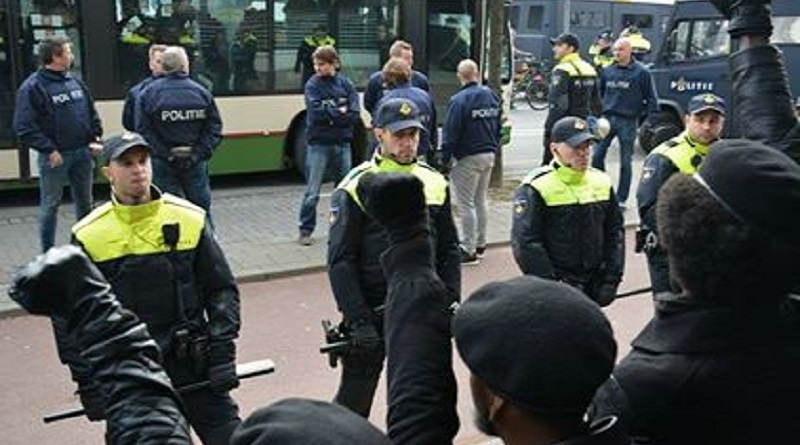 A growing anti-racist movement is challenging the national Blackface tradition of Black Pete (‘Zwarte Piet’) in the Netherlands. Police repression and mass arrests were used to crush a protest in Rotterdam on the 12th of November. In the meantime neo-Nazi’s were allowed to protest and received police protection. The struggle against Black Pete is turning into a struggle against the state and fascism.

On Saturday November 12th three buses with 250 protestors arrived in Rotterdam to demonstrate at the Sinterklaas festivities that included Blackface characters. The buses had been trailed by police along the journey and stopped upon their arrival. Organizers formed the activists into four groups, each taking a different route towards the event. From this point, all protestors were under heavy police surveillance with riot cops and riot vans traipsing alongside each group.

Within half an hour all four groups were stopped and surrounded by riot police, riot vans and undercover cops. Security guards of the public transport also assisted the police. While surrounding and arresting the protestors, police used brutal violence. People were beaten with bare hands and batons, kicked, choked, pulled by their hair and thrown on the ground (see video one, two, three, four). Kno’Ledge Cesare, one of the organizers, and members of Unify were specifically targeted by the police. One member of the public, who stopped to record the police violence, was also arrested.

After being arrested protestors were transferred by buses (provided by RET – the public transport bus company operating in  Rotterdam) to an ‘undisclosed location’ – which turned out to be an old police station in Maassluis. It took a total of four hours to register all the 198 arrestees as it was only possible to register two arrestees at a time (see video). Those who needed to use the toilet were escorted one by one to porta-loos, the insufficient facilities led to people urinating on the buses they were held on.

The majority were detained in a cold garage. There were only two small heaters that didn’t generate enough heat to impact the cold temperatures at all. The detainees got some bottled water and frozen bread, which was only edible after ´toasting´ it on the heater. Other detainees were held in very small cells in police vehicles, they were also thrown some frozen sandwiches. By 9pm, all protestors but one were released.

While anti-racists were met with police violence, neo-Nazi’s of the NVU were allowed to protest in defense of Black Pete alongside the national Sinterklaas parade in Maassluis. Neo-Nazi’s were also waiting outside the Maassluis police station. Police greeted them with casual conversation and handshakes.

The Netherlands as a police state

Originally the demonstration was to be in Maassluis, where the national parade was taking place this year. To make any form of protest impossible, the mayor of Maassluis, Edo Haan, decided to implement an emergency ordinance in order to act against Constitutional Law and limit the freedom of movement, expression and demonstration.

On hearing about the emergency ordinance and huge police presence in Maassluis, Kick-Out Zwarte Piet decided to relocate the protest to Rotterdam. This information was to remain secret to everybody except the organizers. On the 11th of November, however, information about the protest reached the mayor of Rotterdam, Ahmed Aboutaleb. He decided not to implement an emergency ordinance but referred to the Law Public Demonstrations to justify the prohibition of any protest or demonstration related to the Sinterklaas parade and Black Pete.

The Law Public Demonstrations only allows limitations on the right to demonstrate if public health, transport or public order are in danger. Because the protest was peaceful and would not cause any problems, Aboutaleb could not legally stop the protest and simply lied when he stated that he signed an emergency ordinance in order to ban all protests. Amnesty International has condemned the actions of the police and Mayor Aboutaleb. It is clear that the secret police gathered information about the relocation to Rotterdam. Mayor Aboutaleb and the police acted against Dutch and international law in order to crush the anti-Blackface demonstration.

Black Pete and the struggle against racism

‘Ever since Black people have been in the Netherlands, there has been protest against the racist element of the national tradition Sinterklaas.’ However, it is only since the new protest wave in 2011 that real change in the use of the blackface character has been achieved. The protest in Rotterdam was a new highpoint for the anti-racist and progressive movement in the Netherlands. The threat felt by  the movement was illustrated by the massive deployment of police and their aggressive actions. It reveals the determination of the establishment to protect the racist Black Pete tradition.

Activist Abulkasim Al-Jaberi ‘the more effective the protest becomes, the more we will be exposed to the iron fist of the state.. and the violence of people in the streets. This is not a reason to panic but it is a reason to prepare ourselves for this scenario. Not a single social struggle or revolution can succeed without sacrifices being made.’

The anti-Black Pete movement is fostering a revolutionary spirit in the Netherlands. It is imperative at this time to continue to fight against this symbol of racism in the country, representative of the Dutch participation in the slave trade. This movement will lead in the fight against  the racism and oppression deeply entrenched in Dutch society. Real change can only be achieved through struggle.