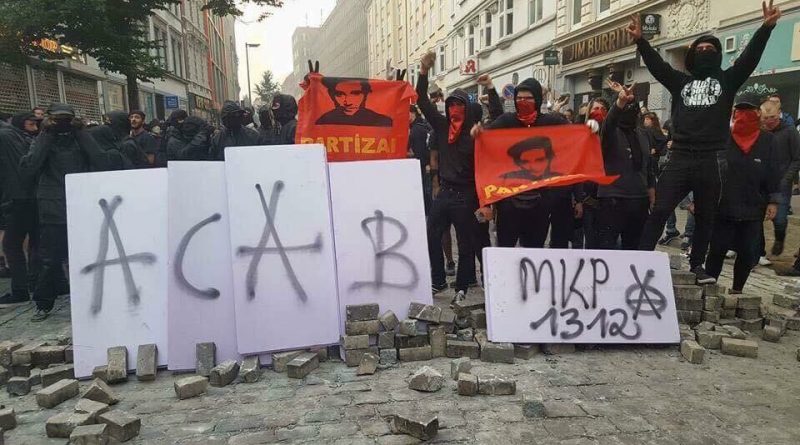 Italian Maoists express their unconditional support to all comrades – and their forces – who during three days have fought in Hamburg, who were able to “break the showcase of imperialism and prevent the rulers of the world form working in peace.”

For three days rebels have shown that it is possible to fight in all form in the belly of the imperialist beast, to oppose and hit the tremendous repressive apparatus set up by German imperialism on behalf of all the imperialists and their lackeys who gathered at the G20 summit.

Those three days the Hamburg rebels have interpreted the rebellion of proletarians and peoples against those who are responsible for wars, aggression, murderers, massacres, exploitation, looting, misery and hunger against the people.

With bravery and determination and often with organizational levels “fit” to the kind of repressive action put in place by the bourgeoisie, they have turned streets and neighborhoods into scorched earth for the forces of the state repression.

The Hamburg rebels have rightly created a hell for the law and order watchdogs.

The German imperialist bourgeoisie and imperialism as a whole have suffered the blow and reacted with revenge and retaliation. But in no way they could bent the spirit of rebellion, the determination of those who opposed them.

The other important element is that the forces of rebellion got solidarity and support in different forms from hundreds of thousands of participants in the demonstrations and the broad masses from Hamburg, as never happened in the struggles against previous Summits, although for other Summits there were also actions and resistance often very large and effective.

The division between “good and bad ones” did not pass in any way, and Hamburg shows that it is possible to unite all the potential of rebellion, to raise the level of the battle and class struggle.

The solidarity with injured comrades and the struggle to free the arrested comrades must continue in Germany and in the world. But with this solidarity it is important to make clear that those who have fought, resisted, have won! And from those who have struggled and fought there is a lot to learn.

In this sense, the battle of Hamburg calls everybody to fight any backwardness, opportunism and sectarianism, to look at the substance of the revolutionary struggle and to find the way by which the fire does not extinguish but propagates. The ideology and the fighting spirit should not only be “flagged” but embodied, learning form and serving the masses in struggle.

WITH ALL HAMBURG REBELS!
FOR THE REVOLUTIONARY TRANSFORMATION OF THE YOUTH AND PROLETARIAN MOVEMENT INTO CLASS WAR, REVOLUTIONARY WAR, PEOPLE’S WAR!