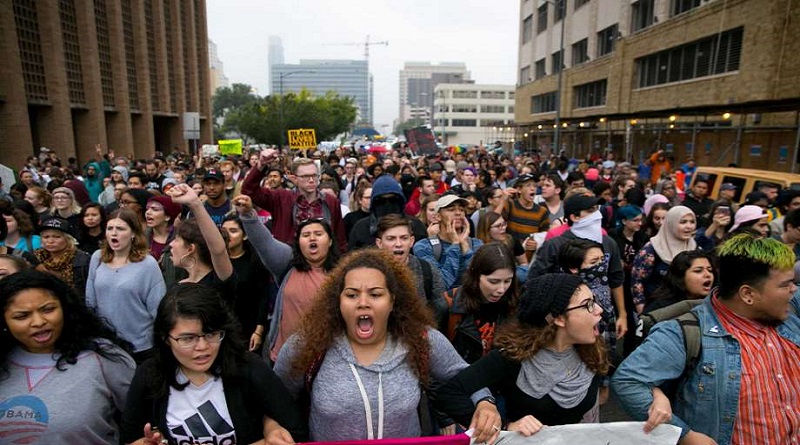 What: Political repression of anti-fascist and anti-white supremacist action in Austin, TX
When: October and November 2016
Where: Austin, TX

AUSTIN, TX–November 14, 2016–Last night, in the fourth night of strident anti-Trump protests in downtown Austin since Election Day, six people were arrested for reasons that are not in any way clear. One was charged only with resisting arrest, raising the perennial question of what the original charge could possibly have been in the first place. But what’s more, two of those arrested have been charged with wild and untenable offenses completely out of character for them, and at least one of these two was badly beaten by the police and had potentially fatal pressure applied to his neck. This individual subsequently went for hours without receiving adequate medical attention, and at this time is still not clear whether this individual has received it. It must not be understood as coincidence that all those arrested were wearing masks, common around the world for anyone engaged in militant antiracist and antifascist protest.

When considered in the context of two other recent incidents, last night’s arrests and brutality must be understood as part of a pattern of quickly sharpening political repression intended to silence militant political action against a trend of white supremacy that has been growing for at least a decade. On the night of Thursday, November 10, at the second anti-Trump march, two protesters were arrested, and many who watched the arrests attest that the police sexually assaulted one of those being arrested.

A few weeks earlier, on October 26, three people were arrested immediately following an action organized by UT students to erase white supremacist graffiti from a pillar in front of the Blanton Museum of Art, accused of an action they did not commit. The university had been informed of this racist graffiti 8 months earlier and had failed to remove it the entire time, meanwhile earlier this year antiracist graffiti on a Confederate statue was removed within hours. The bail for allegedly removing this racist symbol, which has been used by Nazis worldwide for decades, was set at a punitive $20,000 for each individual. By November 10, the concealing paint had been buffed off and at this time the white supremacist graffiti is visible once again.

Austin, TX has seen some of the most militant action against white supremacy in the United States in recent times, and the fact that this heavy-handed and brutal treatment is happening in spite of Austin Police Department’s careful attempts to maintain a public reputation of permissibility reveals that an entirely different set of rules applies when it comes to direct challenges to white supremacy–one that is intended to devastate and even potentially murder anyone who would raise resistance and call this trend by its rightful name of fascism.