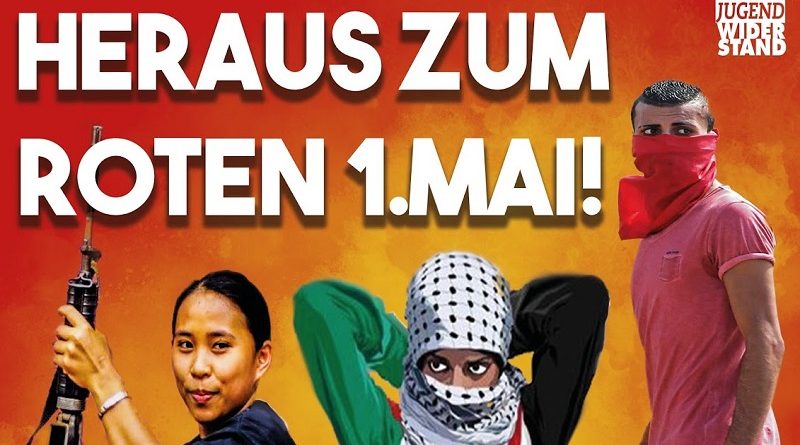 GET OUT FOR THE RED 1st MAY!

UNITE YOURSELVES IN THE FIGHT AGAINST EXPLOITATION AND SUPPRESSION!

“Anniversaries are not empty days of remembrance for the communists and the class-conscious part of the proletariat but guidelines for the class struggle guides to action.” Ernst Thalmann

1st May is the day of struggle of the international proletariat whichis a very important date in the history and present of class struggle. It is our day of action and holiday! On all continents, our class – the workers, as well as all of the exploited and oppressed masses, the common people, women, youth and oppressed nations – are taking over the streets that day. Everywhere the red flag of the proletariat and the rebellion is blowing in the wind. It is defended in battles and gets its color through our blood in the clashes. The clashes that the masses on this day fight against the henchmen of the bigwigs and exploiters, the police and other reactionaries who are in service of the old bourgeois states.

On the 1st of May we feel the unity and the unbridled power behind the exclamation “Proletarians of all countries and oppressed peoples, unite!” very concretely. We really are an international class that with all its turns and twists persistently moves forward into the direction of liberation.

1st May is the day of the struggle against the monopoly bourgeoisie its state its parties its governments and its footmen and servants its armed executors who have been in a war against the common people for a long time. For us this day has a special tradition connected to the rebellion of the Haymarket workers of 1886, the Berlin Blutmai of 1929 and the Kreuzberg Kiezrebellion of 1987, which impressively proved that the potential for revolutionary struggle in the imperialist states has by no means disappeared in a “magical way”. The escalating contradictions and a revolutionary situation in uneven developments are already in progress.

May 1st is anti-imperialist!

Through the imperialist plundering of the world by the imperialist nations world hunger is not a tragic result of alleged food shortages. It is a consciously induced state by the imperialists. In plain language this means: Every starvation in the world is an execution through imperialism. The same goes for all the patients whose illnesses can not be cured because they can not afford the medicines.

Imperialism transforms the world into a smoking debris field for their power and profit. The imperialists are tearing the Middle East apart and agitates the peoples against each other to gain new spheres of influence or to keep the outposts of their supremacy. In this tug-of-war over control of the Arab peoples, it is currently the Syrian people, who are torn to shreds. But the Palestinian people are currently paying for their ongoing resistance against the Zionist bridgehead Israel with new martyrs too.

Meanwhile in from our view faraway Asia: The highly developed and advanced people’s wars in India and the Philippines compel the compradors of their countries to show their bloody and fascist faces. In both countries, the footmen of the imperialist start offensives over offensives to silence the justified war of resistance of the peoples. They are trampling on their own laws. They get upset and rage and their verbal failures increase with their brutality and crimes.

Due to the confusion of the political resistance movement in Germany, international solidarity is being taken off the agenda (the exception is the fighting of the Kurdish nation). A development with devastating consequences:

The eurocentrism and chauvinism of the political resistance movement not only leads to the ideological weakness that often results in defeatism and hopelessness, but also to the isolation of the revolution itself: a real existing and living process that takes place and rages under the leadership of communist parties and progressive anti-imperialist forces.

Therefore, on the 1st of May, let us again send a strong signal of international solidarity with the fighting peoples and oppressed nations! Let us fight the chauvinism and disorientation of the German left with a commitment to proletarian internationalism and solidarity for the developed people’s wars and revolutions in the world!

May 1st is proletarian!

The ordinary people can only survive in this system because they sell their labor force. We create all the wealth of this society, trillions are earned, we bleed for their profits, while we are fed with just enough for our reproduction and a few extra bread crumbs. One thing is certain: The capitalists need us to survive, not the other way round. Capitalism has created the proletariat, and thus its own gravedigger, who, under the leadership of his ideology, has the role of the leading force in the coming revolutions.

That is why it is absolutely right to strengthen the class hatred on the exploiters, parasites and bloodsuckers. The parasites who live at our expense in immense wealth, abundance and waste, while the majority of the people are idling and don’t have enough money. The intrinsic contradictions of this system and its degeneration also bring homelessness, drug junkies, organized crime, reckless egoism and other misery that drives thousands into suicide or depression.

In our class the proletarian women carry the heaviest burden. They suffer from especially intensified conditions of exploitation, fill a large part of the growing low-wage sector and, incidentally, in most cases still do housework and bring up children. Women quotas, which put a few women of the ruling class at the top, are intended to obscure the fact that true female emancipation is not possible in this system.

Falling real wages and pensions, Hartz 4,chicanery by the job center, temporary work, low wages, parallel jobs, inflation, lack of prospects, child poverty, rent usury and repression: THAT is the reality of the poor and working people in Germany!

The attacks of the new Austrian government on the working class in the course of their “budget plans”, show us what we can expect here in Germany and make it clear once again: We must never split on the basis of skin color or origin and must fight back every attack on our living conditions!

So let’s organize the people regardless of their origin, color or gender against the bourgeoisie and their lackeys! In doing so, we must first and foremost rely on the most exploited and oppressed and make them clear: poverty, police state, patriarchy, racism: all this can only be ended by the united people under the leadership of the proletariat. 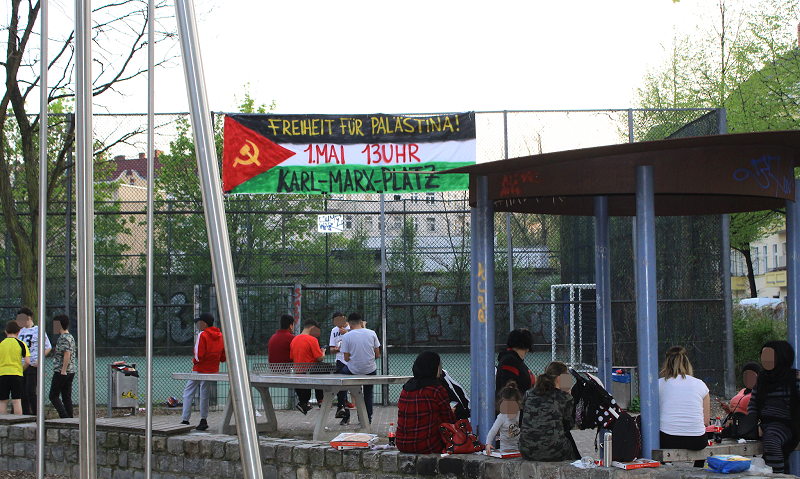 On the 1st of May, no phrases are shouted and no one remains silent! We say clearly what we want and who we are: we want to carry out the socialist revolution in Germany! We want to rip the political power out of the rulers’ hands and give them into the hands of the proletariat in order to build up a socialist Germany with them that assists and supports the fighting peoples and oppressed nations of the world!

Nothing else is a serious and dignified contribution to the world revolution that is taking place and which currently has its storm center in Southeast Asia, with the vital and heroic people wars of the Filipino and Indian people.

We can achieve this goal only if we declare war on the German imperialist monopoly bourgeoisie and lead and win it by applying the proletarian military theory.

We can not win this fight as long as we are deprived of our head and our heart as long as we are deprived of our party! The Communist Party is the proletariat’s fighting organization, the only one capable of creating the instruments it needs itself in order to comprehensively unite, organize and lead the class and the people in the long-standing people’s struggle for political power. A class without their party is wandering around like a chicken whose head has been cut off. A class led by the Communist Party on the correct ideological basis of Maoism is invincible and capable of changing the world according to its own ideas.

We must put the fight for the re-establishment of the Communist Party on the agenda as we celebrate the day of our class! The fact that the word “revolutionary proletariat” without the word “Communist Party” has even become conceivable for many “revolutionaries” in Germany, has its reason in the anti-Communist brainwashing of the FRG(Federal Republic Germany) and the putrid revisionism, which has left nothing, except left-wing frothy and opportunistic social democracy.

Let’s keep Communism up on May 1st! Let’s say things as they are and let us not mince words! Away with opportunism and all illusions!

That is why we call on all revolutionaries, anti-imperialists, anti-fascists, communists, internationalists, honest anarchists and democrats to take the streets of Neukölln with us on May 1st at 1 pm and express all this on the day of our class. Let us fight side by side with the rebellions of the proletariat in other parts of the world for revolution and socialism and a communist future without exploitation and oppression.

UNITE IN FIGHT AGAINST EXPLOITATION AND SUPPRESSION!
NO LIBERATION WITHOUT REVOLUTION!
OUT ON THE ROAD ON THE MAY 1ST!

Come to the anti-imperialist, proletarian and red 13 o’clock demonstration in Berlin-Neukölln on our day of struggle. 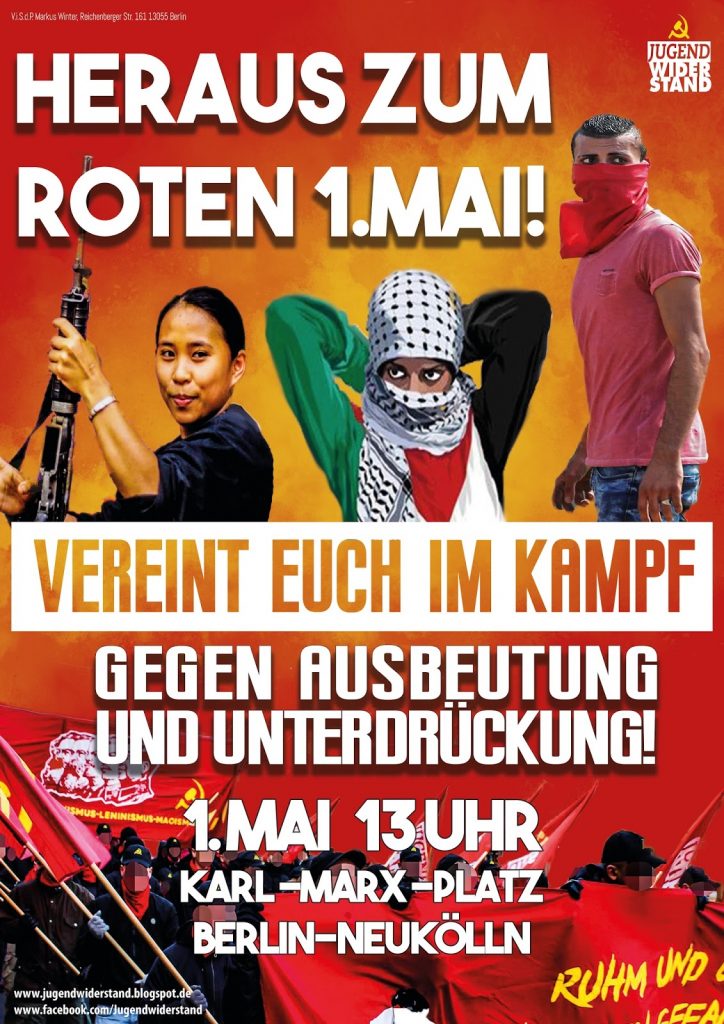