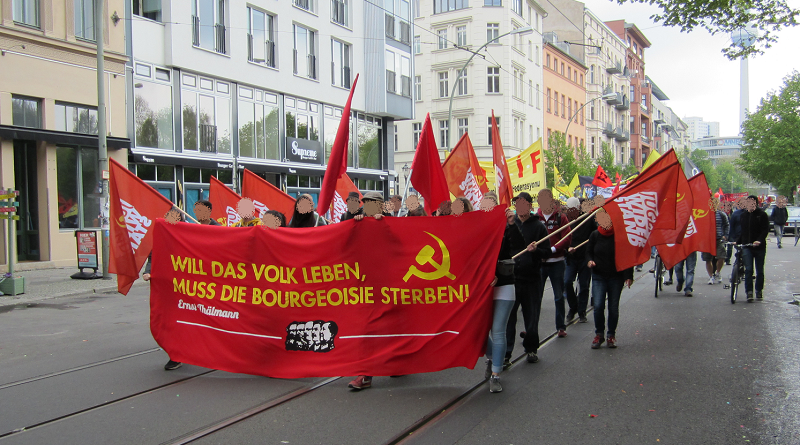 May 1st 2015 was the first International Workers’ Day that we celebrated with our youth organisation, which was recently founded in February. Our plan envisioned making intense use of this day belonging to our class. We decided on a political statement with the slogan “Come out to the revolutionary, red May first!”, in which we present our vision of the world situation, necessities for revolutionaries, and our concrete tasks. We wanted to start the day with a disciplined and ideologically clear display at the morning trade union demo. After that, parallel propaganda actions took place in two working-class districts in Berlin and the evening that day ended in a militant fashion in Hamburg in the demonstration of the “Alliance Against Imperialist Aggression”.

At the Berlin trade union demonstration in Hackescher Markt, we formed an anti-imperialist block together with the comrades from ATIK (Confederation of Workers from Turkey in Europe) and PARTIZAN. With the lead banner displaying “If the people want to live, the bourgeoisie must die! (Ernst Thälmann)”, many Jugendwiderstand and red flags, and new slogans and organised appearance, we put together a clear proletarian expression. It is clear however that this demonstration situated far from working-class areas and in which all sorts of social democrats and other opportunists preach reconciliation and subservience can not remain the main platform of our political expression in the city on May 1st in the future. New slogans of our bloc included “Do not believe the lies of the exploiters – It is right to rebel!”, “Social democracy is betrayal of the workers – long live the dictatorship of the proletariat!”, “The FRG is not our state – all power to the proletariat!”, “The answer to poverty is people’s war – fight for liberation until victory!” and “Serve the people – with full force – we create the new power”, which in practice proved in part to be very good. We believe that our block being joined by new and unknown people is a further success and result of our determined image.

Immediately afterwards, we carried out two small propaganda campaigns with our activists in Neukölln and Wedding. In Karl-Marx-Platz and Leopoldplatz, we raised the red flag and each fixed a banner with the words “May 1st – not a holiday, but a day of struggle! Do not believe the lies of the exploiters! People of Neukölln / Wedding – defend yourselves and fight!”. We distributed a total of 400 leaflets directly in the squares and in the side streets (Wedding and Neukölln). The leaflets familiarised the people with the revolutionary history of their district and of May 1st, denounced current exploitation and oppression, and called for resistance and rebellion. The reactions of the residents and passers-by, which we could observe, were positive and expressed interest.

Then we went to Hamburg to support the revolutionary demonstration of the “Alliance Against Imperialist Aggression”. Last year, up to 4,000 people had participated, successfully fighting against the permanent attacks of the pigs and militantly carrying through the demo. This year, however, the bourgeois state and its lackeys succeeded in preventing such a victory by means of effective work in advance as well as by exploiting other mistakes and weaknesses. The demonstration ended after about 5 metres with unjustified and brutal attacks with truncheons, pepper spray, water cannons (water with irritants) and mounted squadrons. The bourgeois state showed its fascist face, and obviously did not have a minute to allow the demonstration and its content. We condemn this terror against the rights of the working class and look forward to the day when accountability will be called for.

We call on all proletarian youth to join us and fight with Jugendwiderstand against imperialism, revisionism and reaction, for the rights and interests of working-clas youth and the revolution and socialism in Germany, as part of the world revolutionary movement!

In addition, on this May 1st, we welcome the sign of unity of the revolutionary, communist forces of the world expressed in the joint declaration of a total of 29 Marxist-Leninist-Maoist Communist Parties, party-building organisations and organisations, which has been translated into German. 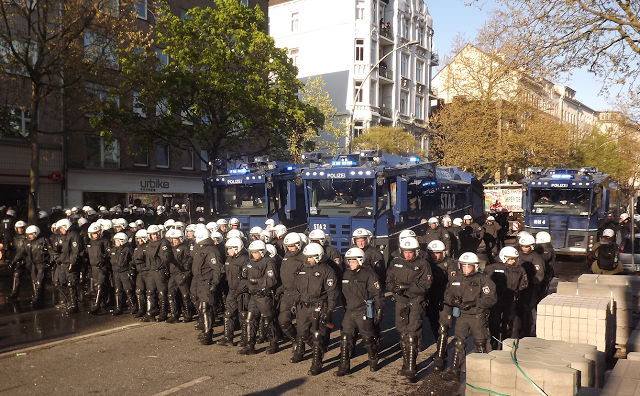 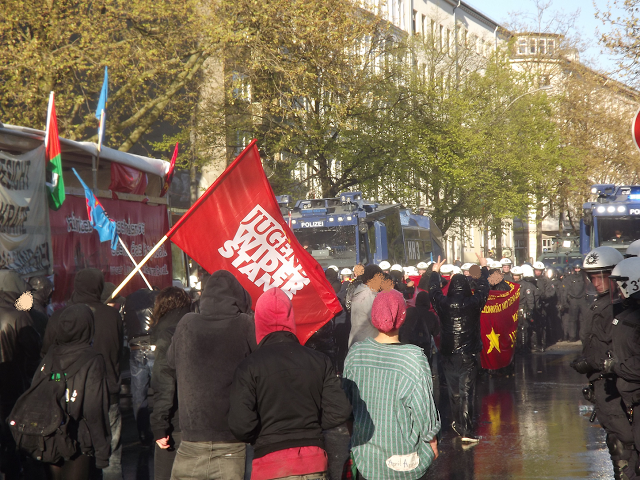 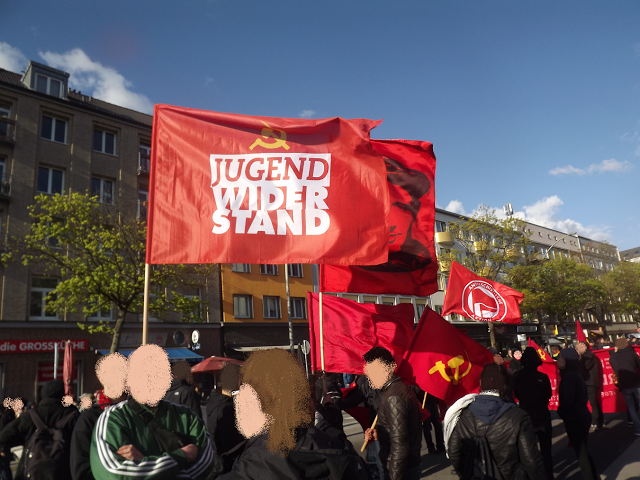 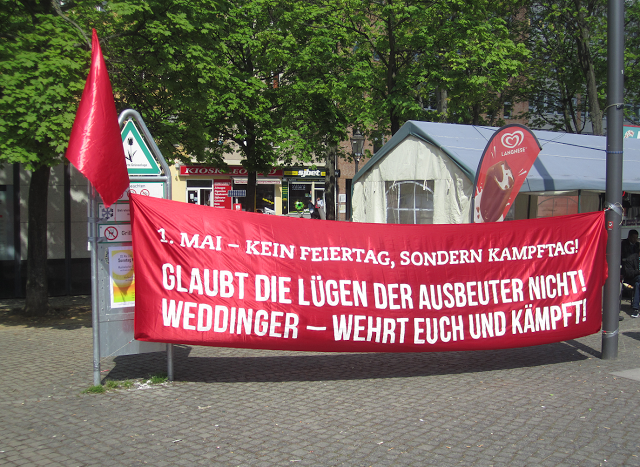 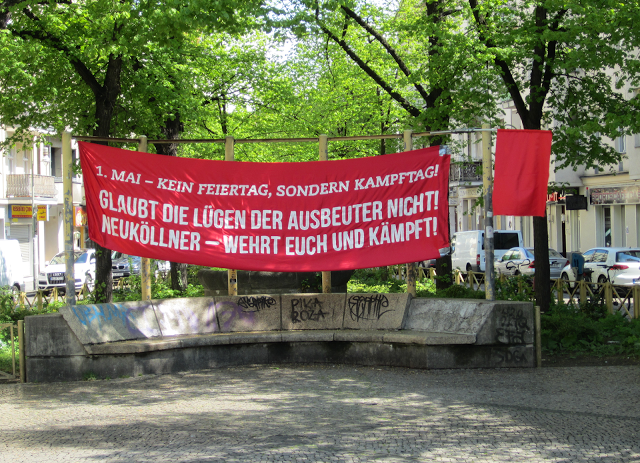 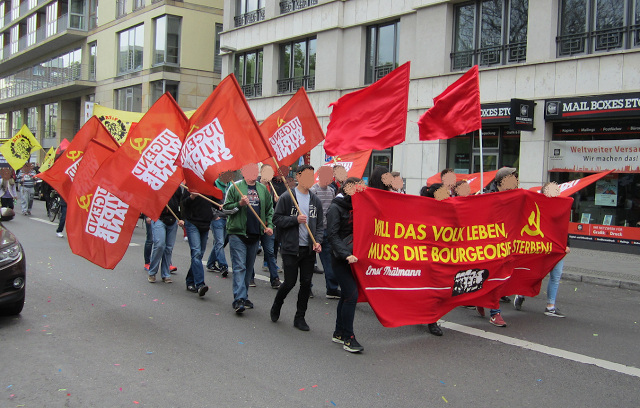 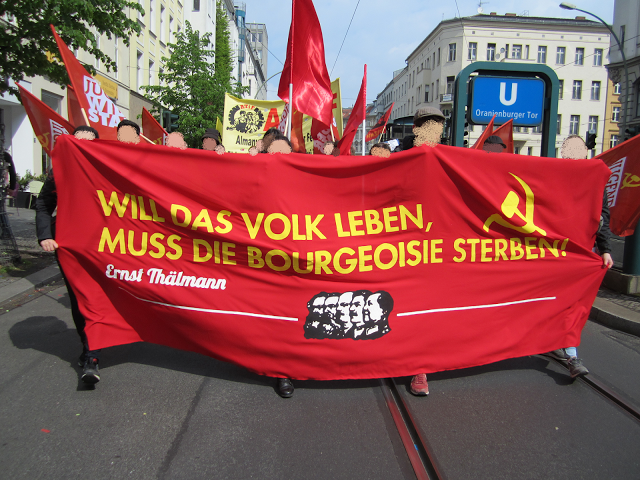 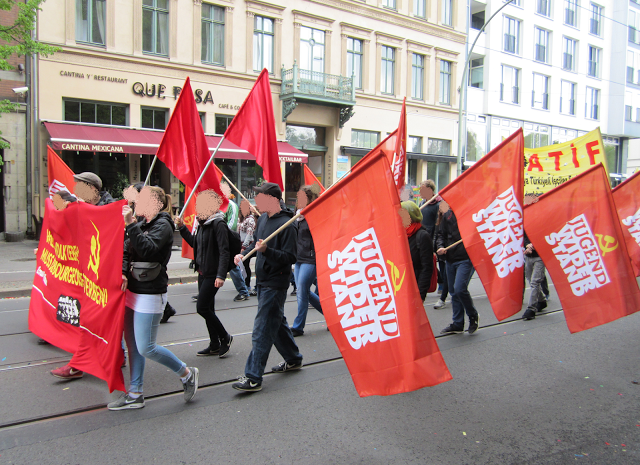 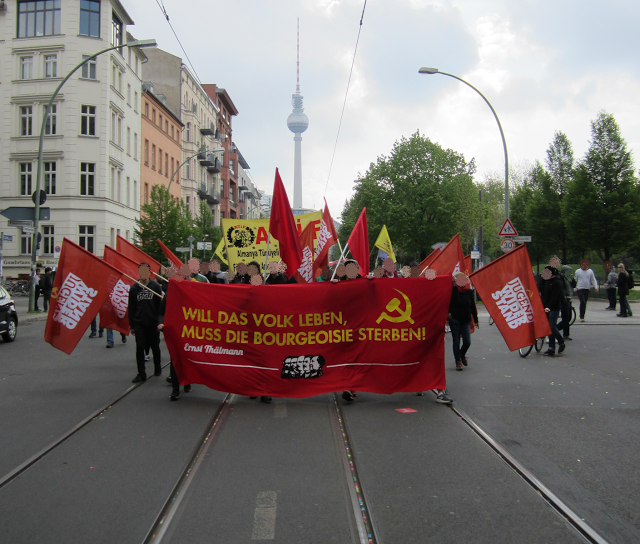