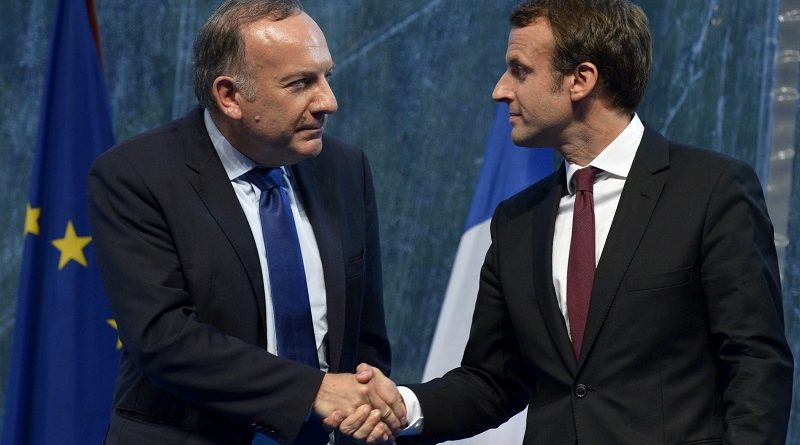 That’s it. As expected, Emmanuel Macron has just been elected President of the French Republic.

A man elected without passion, without massive mobilization in his favor. The candidate of the lesser worse, of the “barrage to the far right”, of the lukewarm compromise, often considered inexperienced, unpleasant and without any program. Without program, really? Let us return to some of the measures he is defending.

Imperialism: In addition to these measures and to the project to launch an “war of information”, Emmanuel Macron develops an aggressive vision of imperialism – always of course under the pretext of “war against terrorism”. Its program explicitly cites Africa, the Mediterranean and the Middle East as areas of intervention. The presence of France in its colonies like Guyana will also be strengthened. A mandatory military service of one month will be restored, the “national guard” will become more important, Operation Sentinel will be maintained, a center of command of operations inside the country will be set up … And for all of that, he plans to increase the defense budget to 2% of the GDP. In short, strengthening the pre-emptive counterrevolutionary dynamic, militarization, march towards war.

Labor law and gifts to the bourgeoisie: Emmanuel Macron defends a “super labor law” where company agreements would systematically take precedence over branch agreements, and which would be unfavorable to all employees. The only thing he does not want to deregulate are the compensations for workers in case of labour court: no way that companies that commited a fault will pay too much compensation to the injured parties, these compensations will therefore be capped. We can also lose our economic contributions when we are unemployment if we refuse two job offers, even if these jobs are shabby! And, of course, all these laws will be passed during the summer by presidential decree, to even not have to bother with a so-called democratic process.

Removal of the ISF, cuts in the labor code, more rights for company management… Emmanuel Macron’s program was supported by the MEDEF for obvious reasons. For us, on the other hand, it is the stick: delayed retirement, precarious work, managerial vision of society, weakening of “social dialogue”. Measures to combat poverty could make you laugh until you get sick, like the proposal to digitize the documents of people living on the streets. They will just have to find a smartphone!

Police: 10,000 policemen and gendarmes will be recruited, the police will be able to prohibit zones to an individual, to immediately impose fines for minor acts (possession of illicit drugs, for example…), will be more heavily equipped … In addition, an intelligence center under presidential monitoring will be put in place to control the population. Reassuring.

Justice: Abolition of the suspensive appeal. Basically, if you are innocent but justice has condemned you, you go to jail and you will appeal behind the bars! Same for sentence adjustment: you thought to have community service? No, you will have closed prison: no more sentence adjustment under 2 years. Hence the construction of 15,000 new prison places, and the massive recruitment of guards.

Overview: What Emmanuel Macron proposes is a society of the permanent state of emergency, militarized, where the proletarians must live in permanent precariousness. To hide this Thatcher worthy nightmare, the emphasis is on new technologies (notably the digitization of procedures or the use of drones) and incentives to secure the support of the educated middle classes. When one recalls the promises of Francois Hollande and compares them with the disastrous record of the last quinquennium for our class, one can only be worry about such an openly aggressive program.

To come to power, fascism needs to assert itself as a credible alternative of capital management in the face of a liberal compromise in full collapse. Emmanuel Macron is therefore the perfect opponent for the National Front, which will try to consolidate its role of national opposition. Undoubtedly, this government will trigger the anger of the popular classes as soon as its first reforms, and this anger will manifest itself in the results with an abstention rate of more than 25%, much higher than in the first round, a record since 1969.

Our Party had chosen the way of the revolutionary boycott of these elections, for it was necessary to delegitimize all the candidates as far as possible, none of whom represented the interests of the proletariat. It was necessary to counter the propaganda of the bourgeoisie which aims to present the presidential elections as the unavoidable means for the masses to assert their interests, whereas on the contrary, they disarm the proletarians by making them believe in the power of the bourgeoisie and therefore contains their revolutionary combativity. A communist must at all times contribute to raise the consciousness of the masses, to arm them with the tools they need to move towards the revolution. To do this today, we must prepare the struggle under this coming government of Macron. This must be done by mass work on the workplaces of the proletarians and where they live, that is to say, mainly in suburban cities, within the framework of the only clear revolutionary strategy that is the Protracted People’s War to snatch power from the bourgeoisie, set up the dictatorship of the proletariat and advance towards communism. We must continue and intensify mass work, organize the proletarians on a revolutionary basis, both in the situation if they abstained, thank to a just analysis of the bourgeois electoral system, that they have voted blank, that they have voted Macron thinking that it could constitute a “barrier” to the rise of fascism.

Today, more than ever, let us develop our class organizations, our antifascist structures, and prepare for confrontation with this new bourgeois government! Comrades, to the battle!

Facing the new government, let’s organize our class and prepare the fight!