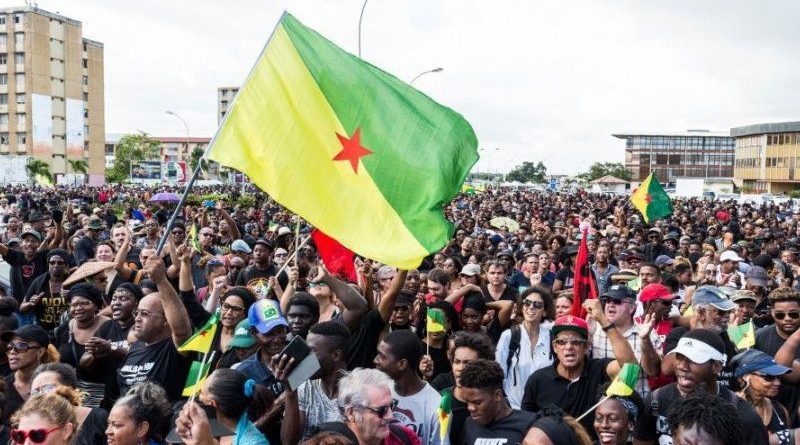 The biggest social mobilization of the Guyanese people ended last week. The Guyanese bravely fought against the French imperialist state for a month. The agreements between the representatives of the different organizations at the head of the struggle and the State took place just before the first round of the elections, a round that revealed the hostility of the Guyanese masses for the French State, where more than 75% of the Guianese abstained!

The first attempts of French colonization of Guyana began in the early 16th century. A century later, the attempts began again and partially failed until 1652, when the first black slaves were transported to Guyana. The French colonial empire disputed control of the territory with the Portuguese, Dutch and British colonial empires and from the nineteenth century onward, maintained its seizure of Guyana. In 1946 Guyana was designated a “French department of overseas”, to obscure the fact that it was a colony.

Even today, Guyana is still a French colony. The symbol of French colonialism in French Guyana is the Guyana Space Center, which consumes 20% of electricity of all the Guyana, while many Guyanese have precarious access to electricity. 15% of the Guyanese have no access to drinking water, the unemployment rate is 22%, more than double that of metropolitan France, and 40% of young people leave the school system without diplomas, which is four times more than in metropolitan France. There are five times fewer general practitioners in French Guyana than in metropolitan France for the same number of inhabitants. In addition, the French state tolerates illegal gold-mining which wreaks havoc on the environment, causing enormous damage to the Amazon rainforest, poisoning the Amerindians living near rivers with the mercury used in the process of extracting gold, and reducing to slavery migrant workers from border countries (Brazil and Suriname) who pan for gold, are unpaid and threatened with death by real private militias.

It is against all these injustices that the Guyanese people mobilized massively for a month. They did it proudly, brandishing the Guyanese flag against the French imperialist state, because the Guyanese are not duped and know that it is only with the independence of Guyana, a crucial claim carried by the movement and in particular by the Union of Guyanese Workers, that the problems and suffering of the Guyanese people can be resolved. Indeed, all the fundamental problems of the country are linked to colonialism and imperialism. Colonialism plundered the resources of the colonized country and prevented it from developing its economy. On the contrary, it set up an unbalanced economy at the service of the colonizing power by plundering natural resources and exploiting the country’s labor force in the economical sectors useful for it.

But the independence of Guyana, like the independence of all the other French colonies, requires an independent Communist Party. Only a Communist Party of Guyana, armed with Marxism-Leninism-Maoism, will be able to offer the way to the liberation of Guyana from French imperialism through a Protracted People’s War, by organizing a broad democratic and revolutionary Front with the aim of establishing the New Democracy, and without interruption advance towards socialism. Our Party in the metropole must assume the double task of helping the people of the French colonies to fight against French imperialism and their watchdogs, but above all to weaken French imperialism at its heart and to fight it until its destruction. This is the special relationship which unites us with brother parties in the French colonies.

Our Party also wishes to salute the struggle of the Guyanese workers of EDF who continue the strike for their demands despite the end of the great social movement that they largely organized.

For a Maoist Communist Party of Guyana and all French colonies!

Long live the international solidarity of the peoples!