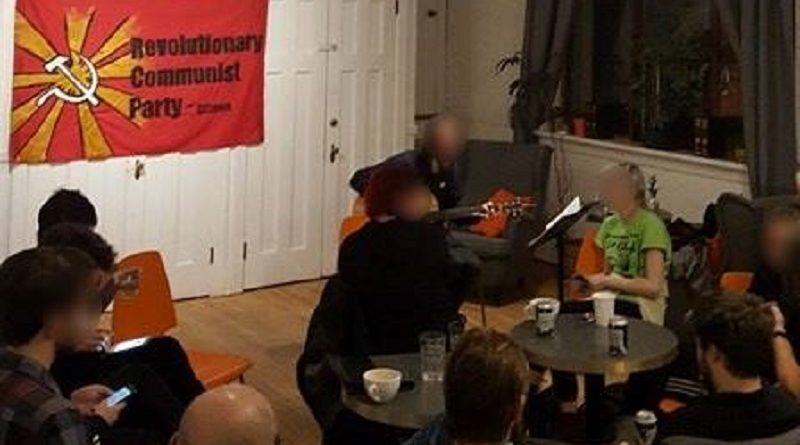 We would like to thank everyone who came to celebrate 11 years since the creation of our party – the Revolutionary Communist Party (PCR-RCP)! We had a great night filled with music, bringing comrades and new people together, a speech from a supporter of the Party and lively discussions. Special thanks to the artist who performed many great songs and set the celebratory mood for the night.

These 11 years have brought great victories for our Party and the proletarian movement in Canada. Starting from the initial launch in a few cities in Canada, the PCR – RCP has been able to expand country-wide and has developed into the strong Party it is now.

Through these years of struggle, we have been able to show support and take active part in many movements and actions in Canada and build up our connections with the masses. The G20 protests in Toronto, Indigenous liberation struggles, the student movement, and the fight against fascism to name a few examples, we have been increasingly taking up a bigger role in the advancement of the class struggle in Canada.

Here in Ottawa, we have developed a militant movement and changed the political realities of on-the-ground organizing. We built this movement in a city known for being the heart of Canada’s bureaucracy, where organizing was only done by liberal NGOs and social democrats. An environment hostile to militancy and communism, where the norm was to engage in non-disruptive marches on sidewalks, coordinating political events with the police, centering the organizing around electing politicians disconnected from the masses and petitioning the government with no result.

We have supported the establishment and growth of the Revolutionary Student Movement (RSM) at most post-secondary schools in Ottawa. The RSM has been organizing actions and campaigns that created and continue to provide a radical alternative to the ineffective, reformist and careerist organizing that dominates student politics. We have been organizing in support of anti-colonial struggles in Ottawa. Most recently, as part of Fuckthe150th coalition we have worked in support of the Reoccupation of Parliament Hill to oppose the overbearing colonial Canada 150 celebrations. We have led many different actions against Men’s Rights Activists and anti-abortion reactionaries, shutting down their meetings and events, kicking them off campuses and have drastically shortened and ruined the annual anti-abortion “March for Life”. To add to this, we have been the leading force against the rise of fascist organizing, launching the Ottawa Against Fascism initiative earlier last year. We have countered fascists on the streets by organizing mass militant actions, biggest one reaching 300 people who have joined forces to shut down racist, fascist events.

As our organizing keeps on growing and becoming more and more successful, our efforts have been increasingly met with police repression, unprincipled conduct from other groups organizing in the city, and even snitch jacketing lies. This is all a result of our work becoming more threatening to the state and us drawing a clear line of demarcation with groups that are not interested in bringing about a fundamental, revolutionary change in this country. A change that will end capitalism, settler-colonialism and imperialism. A change that will end Canada as we know it today. No amount of repression or slander will stop us from continuing our work and achieving our goals!

These 11 years have been full of victories but also, we have faced some setbacks. Despite this, we always need to remember where we are going and why we do our work: Proletarian revolution and socialism! Here’s to the next 11 years of our Party and the continued development of the revolutionary proletarian movement in Canada!

Want to get involved with revolutionary communist and anti-capitalist organizing? Check out these PCR-RCP initiatives and mass organizations in Ottawa!